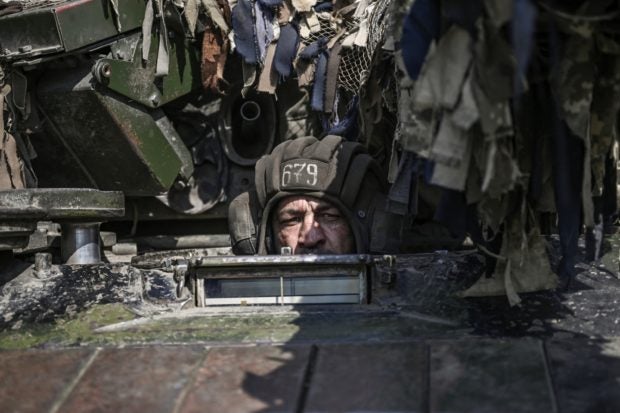 A Ukrainian serviceman drives a Battle Tank (MBT) towards the front line at the eastern Ukrainian region of Donbas on June 14, 2022, amid Russian invasion of Ukraine. AFP

LYSYCHANSK, Ukraine — Ukraine’s battle against Russian troops in the eastern region of the Donbass will determine the course of the war, President Volodymyr Zelensky said Tuesday, asking his nation to stay strong in the face of Moscow’s devastating attack against two key cities.

As the outcome of the conflict hangs in the balance, Nato chief Jens Stoltenberg endorsed Ukraine’s increasingly desperate calls for more weapons, urging allies to speed up deliveries to Kyiv.

Russian forces have intensified efforts to cut off Ukrainian troops remaining in the industrial hub of Severodoentsk, destroying all three bridges which connect it across a river to the twin city of Lysychansk.

“Unfortunately, there are painful losses. But we must stay strong. This is our nation,” Zelensky said in a video address Tuesday evening.

“Hanging in there in Donbas is crucial. Donbas is the key to deciding who will dominate in the coming weeks.”

Around 500 civilians were taking shelter under “heavy fire” in the Azot chemical plant in Severodonetsk, the head of the city’s administration, Oleksandr Stryuk, told Ukrainian television.

The Russian defense ministry said it was ready to organize an evacuation on Wednesday from the plant to the separatist-controlled part of the Lugansk region.

Ukraine’s forces have been pushed back from Severodonetsk’s centre with the Russians controlling 70 to 80 percent of the city in their attempt to encircle it, according to regional governor Sergiy Gaiday.

Capturing Severodonetsk would open the road to Sloviansk and another major city, Kramatorsk, in Moscow’s push to conquer Donbas, a mainly Russian-speaking region partly held by pro-Kremlin separatists since 2014.

Zelensky told reporters Tuesday that how long the war would last depended “very much” on international support, and “the personalities of the leaders of European states”.

He regretted what he called, “the restrained behaviour of some leaders” which, he said, had “slowed down arms supplies very much”.

Deputy Defense Minister Anna Malyar said Kyiv had only received 10 percent of the arms it had requested from the West.

Meeting with a group of Nato member leaders in the Hague, Nato Secretary General Jens Stoltenberg said he was working to coordinate more weapons deliveries.

“Because they absolutely depend on that to be able to stand up against the brutal Russian invasion,” he said.

The European Commission is due to give its recommendation on Kyiv’s membership prospects in the coming days amid skepticism among some members.

From an elevated position in Lysychansk, an AFP team saw black smoke rising from the Azot factory in Severodonetsk and another area in the city.

The Ukrainian military is using the high ground to exchange fire with Russian forces fighting for control of Severodonetsk, just across the water.

Lysychansk pensioner Valentina sat on the porch of her ground floor apartment, where she lives alone, her two walking sticks to hand.

Along the road from Lysychansk to Kramatorsk, Ukrainian forces were transporting more weapons systems to the front, while specialist vehicles carried tanks for repair.

In the town of Novodruzhesk, close to Lysychansk, there was still a smell of burning and smoke from houses that had been destroyed by fire from shelling at the weekend.

“It’s not safe anywhere, it just depends on the time of day, that’s all,” said a soldier standing at a fire station with a skull logo on his sleeve.

“There are tons of people (still) here,” he added.

Further away in Sloviansk, Nataliya, 41, a now unemployed cleaner said she was trying to decide whether to evacuate.

“People will leave again if they start bombing the town heavily,” she told AFP.

In New York, a senior UN official warned Tuesday that Ukrainian children should not be adopted in Russia, where several thousand young people are believed to have been moved since Moscow’s February invasion.

“We’re reiterating, including to the Russian Federation, that adoption should never occur during or immediately after emergencies,” Asfhan Khan, the UN Children’s Fund (Unicef) regional director for Europe and Central Asia, told reporters.

Such children cannot be assumed to be orphans and their movement must be voluntary, Khan added.

The Kremlin meanwhile said it had not received a request from London to intervene in the case of two Britons sentenced to death by pro-Moscow separatist authorities in eastern Ukraine.

Aiden Aslin and Shaun Pinner, along with Moroccan Brahim Saadun, were convicted of acting as mercenaries for Ukraine by the self-proclaimed Donetsk People’s Republic.

Washington said it will continue to allow payments to Russia for energy products through December 5, to give European countries time to prepare for a near-total oil embargo in retaliation for Moscow’s war.

Ex-Russian PM says Putin ‘out of it’, Ukraine war could last two years