15 dead, half million impacted by heavy rains in Guatemela 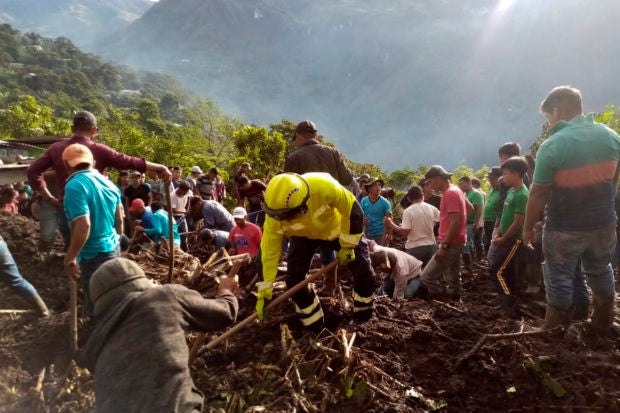 In this handout picture released by Guatemala’s Bomberos Municipales Departamentales a firefighter among other people search for survivors after a landslide in Los Pinos village Alta Verapaz, Guatemala on May 28, 2022. -AFP

GUATEMALA CITY—At least 15 people have died in a dozen mudslides caused by heavy rains that have fallen since early May in Guatemala, where more than 500,000 people have been affected, officials said Monday.

Among the 15 fatalities were a woman and her six children, as well as three brothers, all minors, from two indigenous villages, said the office of the Coordination for the Reduction of Natural Disasters (Conred).

Rains accompanied by strong winds caused landslides, floods, and the collapse of infrastructure across large swathes of the Central American country.

Conred said 930 homes had been damaged as well as eight schools, seven bridges and more than 80 roads.

The regions most affected are those mainly inhabited by indigenous populations, whose communities are most vulnerable to natural disasters.

Nearly 60 percent of Guatemala’s 17 million people live in poverty. Last year rains caused the death of 35 people and impacted almost one in 10 Guatemalans.

At least 26 dead in Guatemala mudslide, many missing