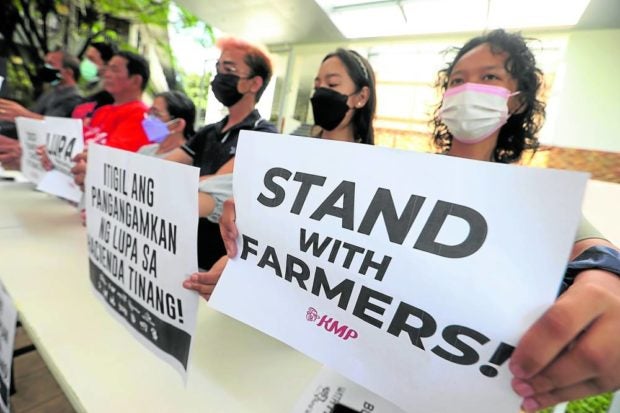 MANILA, Philippines — Activist groups, acting on behalf of 83 farmers and advocates who were arrested last week for occupying a disputed agrarian property in Tarlac province, filed a complaint on Monday before the Commission on Human Rights (CHR) against policemen who detained them.

The groups Anakpawis and Unyon ng Manggagawa sa Agrikultura (UMA), in a complaint addressed to CHR Executive Director Jacqueline de Guia, claimed that human rights violations were committed against the “Tinang 83” while they were detained by police in Concepcion town.

Tinang 83 refers to those farmers, activists, journalists, and students who occupied the 2-hectare Hacienda Tinang on Thursday, in the village of the same name in Concepcion, for what they called “bungkalan” (planting).

But they were arrested by police for that activity and charged with illegal assembly as well as malicious mischief after police alleged that the farmers destroyed the sugarcane planted there.

Five foreigners and three researchers were also arrested, but they were later released when the Office of the Tarlac provincial prosecutor found that they were mere “tourists and bonafide observers.”

According to Anakpawis national president Ariel Casilao and UMA national chairperson Antonio Flores, the detainees were subjected to harassment, threats, and intimidation, physical injury, inhumane detention, mental abuse, red-tagging, and delay in their release on Sunday.

They were freed on bail of P12,000 each, after Judge Antonio Pangan of the Capas-Bamban-Concepcion, Tarlac 2nd Municipal Circuit Trial Court, granted a motion by their lawyers for their release and the reduction of the bail bond from P39,000 each, or a total of P3,237,000, as the Tarlac provincial prosecutor’s office had earlier recommended.

Pangan set their arraignment and pretrial conference this Friday.

In a telephone interview on Monday, Col. Erwin Sanque, Tarlac police director, said the 83 were released beginning 3:30 p.m. until 6 p.m. on Sunday.

But in the complaint before the CHR, the chief of the Concepcion police, Col. Reynold Macabitas, was accused in particular of blocking their release even after they posted bail.

Brig. Gen. Matthew Baccay, Central Luzon police director, said the detention of the Tinang 83 was “in accordance with the law and with utmost respect for human rights.”

“We do not condone any unlawful demeanor perpetrated by any of our members, especially during the conduct of any police operations,” Baccay said.

Locked in one cell

But one of those arrested, John Mark De Mesa of the National Network of Agrarian Reform Advocates-Youth, recounted several instances of their rights being violated while they were detained.

He said 60 of the detainees, including himself, were locked in one cell.

“We cannot even eat simultaneously,” De Mesa said in Filipino during a press conference at Freedom Park on the CHR’s premises on Monday when the activists filed their complaint.

“That is why we had a shifting schedule, with some lying on the floor, others were sitting down while some were standing,” he said.

He also recalled that the prison cell’s toilet was “not well-covered.”

“We didn’t have any proper sleeping beds and almost all of us were without sleep because we were all uncomfortable,” De Mesa said.

He accused the police further of red-tagging them as members of the New People’s Army.

Also speaking at the press conference, lawyer Jobert Pahilga questioned the charges against the Tinang 83.

“How will there be an illegal assembly if [nobody among the 83 was armed] in the first place?” Pahilga said, explaining that there should be armed individuals present for the charge of illegal assembly to have basis.

He said his clients were not even provided with a copy of the complaint-affidavit against them.

Farmers’ group Kilusang Magbubukid ng Pilipinas, in a statement, said: “Planting food and supporting farmers are no mischief, and the right to assembly is guaranteed by the highest law in the land.”

The National Union of Journalists of the Philippines, which put up more than P72,000 in bail money for the two journalists and nine students writing for campus publications, criticized the police for their arrest “[d]espite [their] identifying themselves as members of the press.”

Both groups claim to be the legitimate agrarian reform beneficiaries of the farmland being used to plant sugarcane.

Makisama Tinang said its 236 members are all certified agrarian reform beneficiaries and are the real owners of the land. The group also said its members obtained their collective Certificates of Land Ownership Award from the Department of Agrarian Reform (DAR) in September 1995.

Makisama said it was not until 2016 that they learned that the DAR had also issued such certificates to the Tinang SNMCI, which prompted the Makisama farmers to petition the department to honor the 1995 list.

The DAR subsequently issued a writ of execution twice, in 2018 and 2019, both upholding the rights of Makisama members.

A meeting on the distribution of the land was set on Aug. 5, 2021, more than a year into the pandemic. But the DAR postponed it, citing the COVID-19 situation.

PNP says release of ‘Tinang 93’ not delayed: No law, judicial offices on Sundays

After arrest of ‘Tinang 93,’ DAR asks groups to not use farmers for political agenda