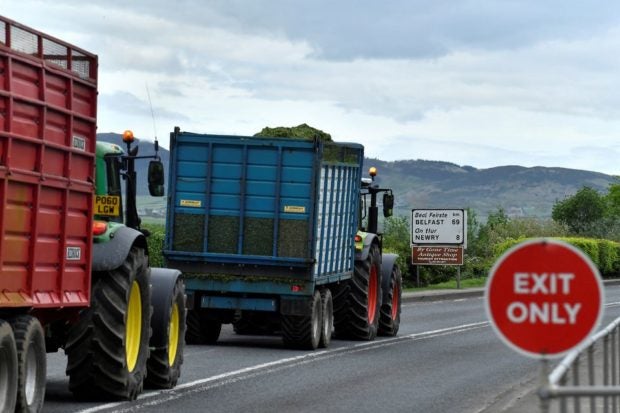 LONDON — Britain will propose overriding the rules that govern post-Brexit trade with Northern Ireland on Monday in a move that will inflame tensions with the European Union that have simmered since the protocol came into force in 2021.

When Britain left the EU, Prime Minister Boris Johnson agreed a deal that effectively kept Northern Ireland in the EU single market and customs union to preserve the open border with Ireland specified in the Good Friday peace agreement.

It imposes customs checks between the province and the rest of the United Kingdom, which pro-British communities in Northern Ireland say erodes their place within the UK.

Johnson has said the protocol’s implementation has damaged trade within the United Kingdom and has threatened political stability in Northern Ireland.

The legislation will be presented to parliament by British Foreign Secretary Liz Truss.

Brussels believes any unilateral change could breach international law. It could respond by launching legal action and by imposing countermeasures, such as tariffs.

Britain’s Northern Ireland Secretary Brandon Lewis insisted on Sunday that the legislation complied with the law.

He declined to say how the protocol would be changed, but said the government would set out the legal basis for the bill.

It is expected to propose a “green channel” for goods moving from Britain to Northern Ireland, as well as scrapping rules that prevent the province from benefiting from tax assistance and ending the role of the European Court of Justice as sole arbiter, according to reports.

The plan will be a test of Prime Minister Boris Johnson’s authority after he was almost removed from office last week when four in ten of his lawmakers opposed him in a confidence vote.

However, it will be seen by the EU as an inflammatory move that violates an international treaty.

European Commission vice-president Maros Sefcovic said in May that Brussels would respond with all measures at its disposal.

U.S. House of Representatives Speaker Nancy Pelosi has said there will be no U.S.-UK trade deal if London scraps the protocol.

Ireland’s Sinn Fein, the nationalist party that won a historic victory in an election in Northern Ireland last month, said Britain would “undoubtedly” break the law by imposing unilateral changes to the protocol.

‘Whatever it takes,’ UK’s Johnson warns EU over post-Brexit trade

EU-UK trade talks to be complicated