In Tarlac, 87 held over land feud 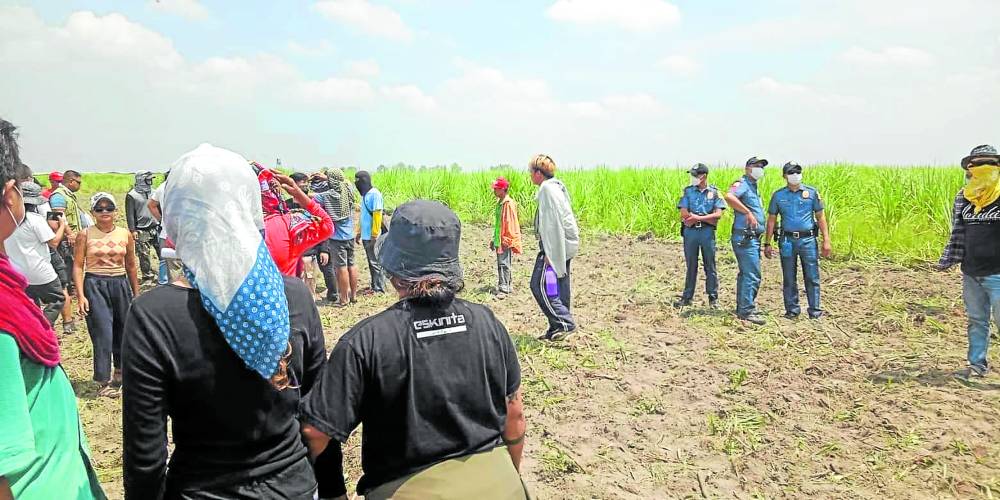 OWNERSHIP BATTLE Tension grips an agrarian reform area in Concepcion, Tarlac, on Thursday as policemen prepare to arrest a group of farmers and their supporters over an ownership dispute with a local cooperative. —PHOTO COURTESY OF UNYON NG MGA MANGGAGAWA SA AGRIKULTURA

At least 87 agrarian reform beneficiaries (ARBs) and members of groups supporting them were arrested by the police on Thursday while they were clearing a 2-hectare land that is locked in a dispute at Barangay Tinang in Concepcion town, Tarlac province.

Police Lt. Col. Reynold Macabitas, Concepcion police chief, confirmed the arrests, saying those apprehended were mostly members of Makisama Tinang, a group of about 90 ARBs identified by the Department of Agrarian Reform (DAR) in 1995 to receive 200 ha that the Catholic Church’s Dominican order gave up for agrarian reform in the town.

Mayor-elect Noel Villanueva said Tinang Multi-Purpose Cooperative filed complaints of destruction of property and malicious mischief against the ARBs because the latter allegedly destroyed sugarcane planted in the area.

Before Makisama held its “bungkalan” (cooperative planting), it fought off efforts of the DAR to reevaluate the beneficiaries of the appeal of the Tinang cooperative. Villanueva, who is set to finish his last term as Tarlac representative, and his relatives are members of the cooperative.

A team from the DAR arrived in the area shortly before noon but failed to stop the arrest of Ophelia Cunanan, Felino Cunan Jr., Alvin Dimarucut and other farm leaders gathered under a large hut, according to the farmers’ group Unyon ng mga Manggagawa sa Agrikultura (UMA).

Also arrested were three students from Saint Louis University and the University of the Philippines Baguio and three volunteers from the youth group Kabataan Partylist Cordillera (KPL).

According to KPL, the students and volunteers were helping the farmers during the bungkalan.

UMA reported that aside from the 20 policemen who arrived with the mayor, three teams from the police’s regional mobile group also went to the area.

They are held at the Concepcion police station and assisted by lawyers as they await inquest, according to a report of UMA.

In February, the ARBs staged a protest at the DAR central office in Quezon City after filing a comment to the petition of the Tinang cooperative to revise the certificate of land ownership award (Cloa) issued in 1995.

The comment was signed by 94 ARBs who said the DAR had identified them on the final list in 1995, or seven years after the land was covered by the Comprehensive Agrarian Reform Program in 1988.

In a referendum by the DAR in 1999, the 94 ARBs voted “no” to joining the cooperative and to having their lands managed by it.

They said the DAR tried to segregate the lands for those who did not join the cooperative, claiming that the Villanueva family blocked the segregation.

But in his letter to Agrarian Reform Undersecretary Luis Meinrado Pangulayan in August 2021, Villanueva said the DAR’s listing and process were fraught with “errors.”

Villanueva said those listed in the collective Cloa title were not even qualified, while those qualified were not included.

He cited issues, such as duplication of names, use of aliases, exclusion of Dominican employees, and inclusion of nonresidents, private contractors and minors, during the second screening.

According to Villanueva, he and his immediate relatives became founding members of the cooperative because farmers in their home village of Tinang asked them to help organize it as early as 1980.

After 34 years, Tarlac land feud yet to end