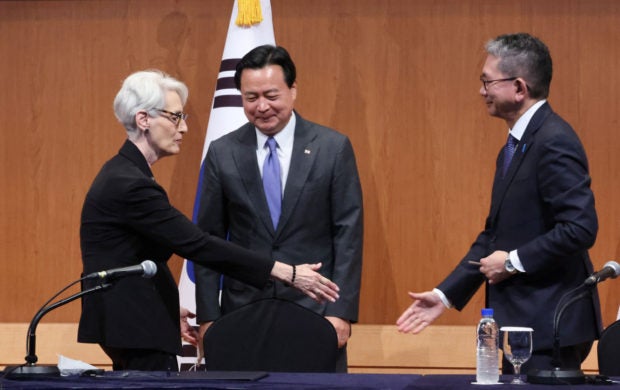 In the joint statement, the vice foreign ministers and deputy secretary strongly condemned “the repeated unlawful ballistic missile launches by the DPRK,” referring to North Korea by its official name, Democratic People’s Republic of Korea.

“The Vice Ministers and the Deputy Secretary urged the DPRK to abide by its obligations under relevant UNSC resolutions and immediately cease actions that violate international law, escalate tensions, destabilize the region, or endanger global peace and security, and instead engage in dialogue toward the complete denuclearization of the Korean Peninsula,” the joint statement read.

The three officials reaffirmed their last trilateral joint statement issued on May 27, and expressed commitment to advance the trilateral security cooperation to curb threats from the North.

Amid rising speculations that Pyongyang may conduct its seventh nuclear test soon, Sherman noted the US is steadfast in its commitment to the defense of Seoul and Tokyo, which include extended deterrence.

On Tuesday, US Special Representative for North Korea Policy Sung Kim said the US officials “assess that the DPRK is preparing to conduct a seventh nuclear test.” The International Atomic Energy Agency also said that North Korea is “readying their nuclear test site,” raising concerns that a nuclear test may be imminent.

At the same time, the three officials of South Korea, the US and Japan underscored how “a path to serious and sustained dialogue remains open,” urging Pyongyang to return to negotiations.

Addressing the serious spread of COVID-19 in the North, the envoys also expressed hopes for the North Korean regime to respond positively to their own as well as international offers of assistance to fight the pandemic.

Other pressing regional and global issues were discussed at the trilateral consultation.

In the joint statement, the officials expressed their joint support for Ukraine, the restoration of Myanmar to a democratic path and bolstering engagement with the Association of Southeast Asian Nations. Within the ASEAN-led architecture, they also vowed to enhance cooperation with Pacific island countries in various fields, including economic and energy security, while promoting a free, open and inclusive Indo-Pacific region.

Wednesday’s trilateral meeting is the first face-to-face vice ministerial level meeting held between the officials of the three countries since South Korea launched a new government in May.

Highlighting that their trilateral cooperation is grounded in shared values, the three officials also agreed to make their consultation meeting regular, and to meet again in Tokyo in the fall.

As North Korea appears to be stepping up its nuclear program and has test-fired a record number of ballistic missiles this year already, Seoul, Washington and Tokyo are building political momentum to deepen their trilateral cooperation to counter the threats.

Just 11 days after the inauguration of South Korean President Yoon Suk-yeol, US President Joe Biden traveled to Seoul and Tokyo to hold summits with the respective countries’ leaders in May. A series of top-level meetings have ensued, including a trilateral meeting of special envoys for North Korea last week.

The defense ministers of the three countries are also expected to meet on the sidelines of the Shangri-La Dialogue, where North Korea’s nuclear program is likely to top the agenda.

Pyongyang has launched 31 ballistic missiles this year, which marks its biggest figure in a single year. The previous high mark was 25 in 2019.