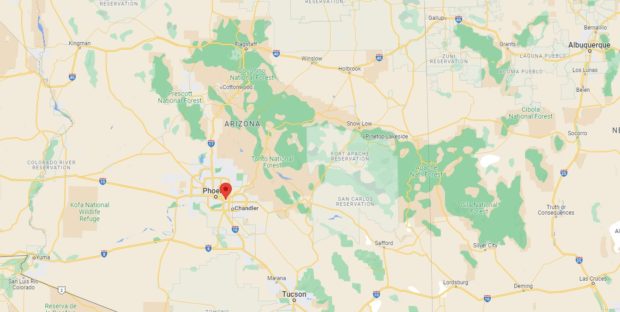 WASHINGTON — A homeless man drowned in the US state of Arizona while three police officers watched, according to a video and transcript released to the public on Monday.

The officers have been suspended pending the results of multiple investigations into the incident, according to a statement by the city of Tempe.

On May 28, police responded to a “reported disturbance” between the man, 34-year-old Sean Bickings, and his partner, who were near an artificial lake, the statement said.

Video footage released by the city shows officers speaking to his partner, then Bickings, who after a few minutes climbs over a fence and slowly wades into the lake.

The officers tell him swimming in the lake is not allowed, but he continues to swim out and under a pedestrian bridge.

The video then stops, with the city claiming the remainder is too “sensitive” and instead offers a transcript of the audio.

“So what’s your plan right now?” asks one of the officers, according to the transcript.

“No, you’re not… go to the pylon and hold on,” another officer responds.

“Okay, I’m not jumping in after you,” said the second officer.

According to the transcript, the officers again tell the homeless man to swim, while trying to control his partner’s increasingly frantic behavior.

“Can you hear me?” are the last words attributed to Sean Bickings in the transcript.

One of the police officers later notes that Bickings “hasn’t surfaced in about 30 seconds.”

His body was later recovered.

The city said it intends to make more videos from the the officers and cameras in the area public in the coming days.

Starbucks apologizes to police for incident in Arizona shop