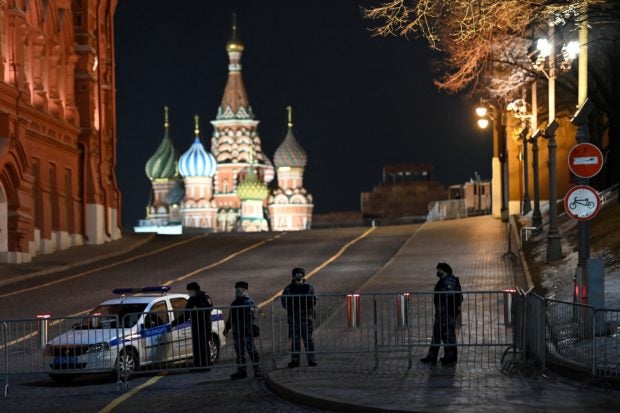 FILE PHOTO: Police officers block access to Red Square during a protest against Russia’s invasion of Ukraine in central Moscow on March 2, 2022. – Jailed Kremlin critic Alexei Navalny on March 2 urged Russians to stage daily protests against Moscow’s invasion of Ukraine, saying the country should not be a “nation of frightened cowards” and calling Vladimir Putin “an insane little tsar.” (Photo by Kirill KUDRYAVTSEV / AFP)

Moscow, Russia — Moscow warned Monday that it would respond to Western supplies of long-range weapons to Ukraine by stepping up efforts to push Kyiv’s forces further from its border.

“The more long-range weapons you supply, the further we will push away from our territory” the line of Ukrainian forces, Foreign Minister Sergei Lavrov told reporters.

Washington and London have defied Putin’s warnings against supplying Kyiv with advanced weapons, saying they would send long-range missile systems to Ukraine.

The US last week announced it would give Kyiv its high mobility artillery rocket system, known as HIMARS, which can simultaneously launch multiple precision-guided missiles and is superior in range and precision to existing systems Ukraine has.

Britain said Monday it will mirror the United States and send long-range missile systems to Ukraine too.