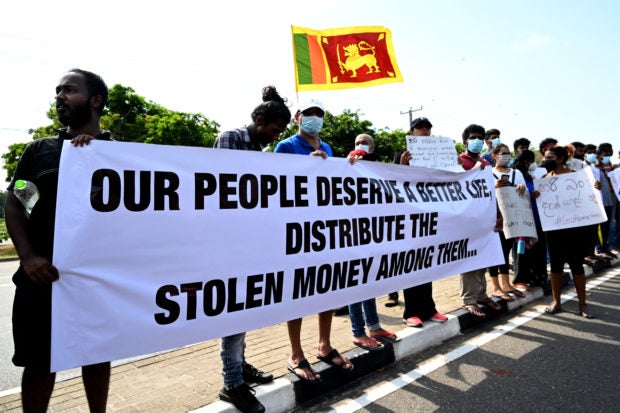 FILE PHOTO: Protestors hold banners and placards during a demonstration against the surge in prices and shortage of fuel and other essential commodities in Colombo on April 3, 2022. – Armed troops in Sri Lanka had a tense confrontation with a crowd protesting a worsening economic crisis on April 3, after a social media blackout failed to halt another day of anti-government demonstrations. (Photo by Ishara S. KODIKARA / AFP)

Colombo, Sri Lanka — A cabinet minister in crisis-hit Sri Lanka was convicted on Monday of extorting money from a businessman over a land deal, a rare guilty verdict in a graft case in the South Asian country.

He is currently the urban development minister and was previously responsible for tourism, before a brief spell as public security minister.

Sri Lanka ranks 102nd out of 180 countries in Transparency International’s Corruption Perceptions Index for 2021, but it is extremely rare for senior Sri Lankan politicians to face accountability for graft allegations.

Ranatunga intimidated the businessman to demand a bribe of 64 million rupees in 2015 (then about 470,000 US dollars), the high court found.

Only part of the money had been paid when the developer went to the police after he said Ranatunga threatened to kill him if he did not pay up in full.

As well as the suspended jail term and fine, High Court Judge Manjula Thilakaratne ordered Ranatunga to pay the man one million rupees (2,700 US dollars) in compensation.

“The judge also ruled that the minister must serve a 12-year sentence should he neglect to pay the fine and compensation,” a court official said.

There was no immediate comment from the 55-year-old politician, who at the time was the chief minister of the Western Province, which covers the capital Colombo.

Ranatunga is a major ally of President Gotabaya Rajapaksa and serves as his chief government whip in parliament.

Since Rajapaksa came to power in November 2019, a string of politicians, including his younger brother Basil, has been discharged from corruption cases after the state withdrew charges on “technical issues.”

Thousands of people have been protesting outside Rajapaksa’s office in Colombo since April 9, demanding his resignation over the country’s catastrophic economic crisis.

Sri Lanka is facing a serious shortage of foreign exchange to finance even the most essential imports such as food, fuel, and medicines.