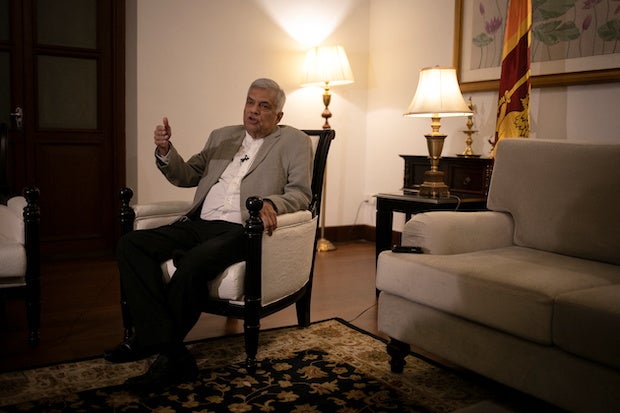 Sri Lanka’s Prime Minister Ranil Wickremesinghe gestures as he speaks during an interview with Reuters at his office in Colombo, Sri Lanka, May 24, 2022. (REUTERS/Adnan Abidi)

COLOMBO — Sri Lankan Prime Minister Ranil Wickremesinghe said on Sunday his government was working to make the president and Cabinet accountable to parliament after weeks of street protests triggered by the worst economic crisis in decades.

Hit hard by the pandemic, rising oil prices, and populist tax cuts, Sri Lanka faces rampant inflation and shortages of fuel and other essentials, prompting the resignation of former Prime Minister Mahinda Rajapaksa and his Cabinet this month.

Wickremesinghe said his government has proposed enacting laws to give parliament more power, adding that over a dozen independent committees would be set up for parliamentary oversight and supervision of financial matters.

“According to the new system we have proposed, the president will be held accountable to the parliament. The Cabinet of Ministers is also accountable to parliament,” Wickremesinghe said in a televised address.

The proposal could take several weeks to be approved, as it needs to be accepted by the cabinet and the Supreme Court, after which the parliament’s approval will be sought.

President Gotabaya Rajapaksa and his brother, Mahinda, rolled back a series of electoral, police, and financial reforms enacted by the previous government, months after assuming power with a two-thirds majority in 2020.

Opposition leaders had accused the Rajapaksa government of disproportionately increasing presidential powers and diluting the role of the parliament in lawmaking.