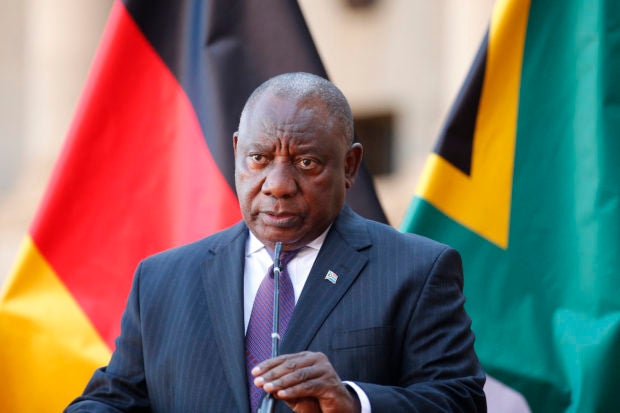 South African President Cyril Ramaphosa conducts a press conference during the visit of German Chancellor Olaf Scholz (not pictured) at the Union Buildings in Pretoria on May 24, 2022. AFP

JOHANNESBURG, South Africa—South Africa’s President Cyril Ramaphosa is embroiled in a growing scandal centered on the theft of cash from his sprawling cattle farm worthy of a spy thriller that has highlighted the leader’s wealth.

Ramaphosa is accused of complicity in buying the silence of the burglars who were allegedly detained on his property, charges which he fiercely denies as he vies to stay on as ruling party leader.

The office of Ramaphosa, who is known affectionately as “the buffalo” for his collection of prize cattle, attempted to snuff out speculation and intrigue with a business-as-usual statement.

“While there is much public interest and concern” the president remained “firmly focused on the task of rebuilding the economy and the country”, the presidency said.

The scandal came to light after a criminal case was brought by the country’s former spymaster and ruling ANC member Arthur Fraser, now threatening to overshadow the president’s effort to remain party leader.

Ramaphosa will face party members at a conference in December during which he could be ousted from the ANC’s top job.

The 69-year-old party veteran who succeeded Jacob Zuma as president of both the party and South Africa has insisted he was not involved in any criminal conduct.

The president, who has a considerable personal fortune, vowed to continue the fight against corruption, but pledged “once again” to cooperate fully with any investigation.

The presidency stressed it would “not be able” to go into details of the case, leaving the police and the judiciary to their work.

The saga began in February 2020, according to the complaint filed Wednesday at a Johannesburg police station by Fraser, the former South African intelligence chief.

Robbers allegedly broke into Ramaphosa’s Phala Phala farm in the northeast of the country where they found $4 million in cash hidden in furniture.

The case accuses Ramaphosa of concealing the theft from police and the tax authorities.

It sensationally alleges that the president then “paid” the burglars “for their silence”.

Fraser, who said he provided police with “photos, bank accounts, names and videos”, accused Ramaphosa of obstruction of justice and organising for the suspects to be kidnapped, interrogated on his property and paid off.

On Thursday, the president’s office confirmed an “armed robbery” in Ramaphosa’s Limpopo game reserve, during which the proceeds from the sale of cattle were stolen.

The president, who was attending an African Union summit in Addis Ababa, was not present at the time.

“On being advised of the robbery, President Ramaphosa reported the incident to the head of the Presidential Protection Unit of the South African Police Service for investigation,” the presidency said.

Speaking at an ANC provincial conference in Limpopo on Sunday, Ramaphosa himself suggested there could be a “political agenda” behind the allegations.

The ambitious leader, who hails from a humble background in Soweto, in 2015 ranked 42nd on Forbes’s list of Africa’s richest people, with a fortune of nearly 400 million euros.

The ruling African National Congress (ANC) must decide by December whether to retain Ramaphosa as president in 2024.

“Ramaphosa is having a hard time consolidating power within the ANC,” and the latest furore is already “a problem for Cyril”, as many South Africans refer to him.

Nothing can be taken for granted, especially with unemployment stubbornly high, soaring prices at the pump and profound economic challenges ahead.

While Thabo Mbeki and Jacob Zuma easily won their second terms, the ANC fell below 50 percent support for the first time in local elections in 2021, Tau said.

“That is his legacy.”