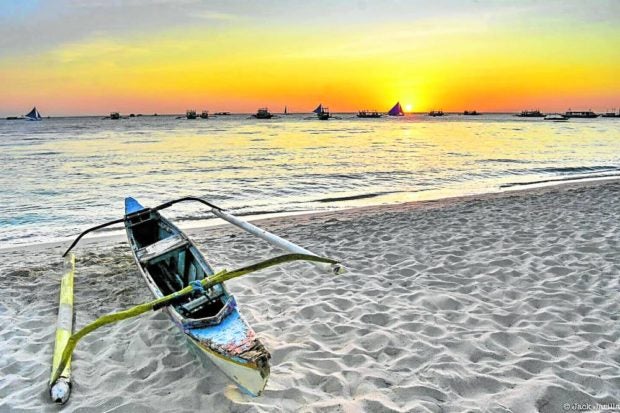 WELCOMING SUNSET | The beach of Boracay Island seems empty in this photo taken on May 11, 2022, but domestic tourists have actually been back with a vengeance, as the world-famous island resort continues to have record-high visitors in the same month during the pandemic. (Photo by JACK JARILLA)

ILOILO CITY, Iloilo, Philippines — Business owners and residents of Boracay Island have something to look forward to in the next six years: better government support.

They were hopeful that the victory of President-elect Ferdinand Marcos Jr. on Boracay Island would translate to a lot of government assistance to help the island recover from the massive slump due to the COVID-pandemic, said Mayor-elect Frolibar Bautista of Malay town in Aklan, where the island is located.

Marcos won by 593 votes against Vice President Leni Robredo in Boracay Island in the May 9 elections. Marcos got 8,932 votes against Robredo’s 8,339 votes.

Stakeholders of the island were also watchful on the plans of incoming Tourism Secretary Ma. Christina Frasco, the mayor of Liloan town in Cebu and spokesperson of Vice President-elect Sara Duterte, who will succeed current Tourism Secretary Bernadette Romulo Puyat.

“We hope that programs for Boracay Island under the Duterte administration will be continued by the next administration because many voters here voted for Marcos because he promised continuity,” Bautista told the Inquirer in a telephone interview.

Bautista is currently the town’s acting mayor after the Office of the Ombudsman dismissed Mayor Ciceron Cawaling from office in 2019 for grave misconduct and gross neglect of duty. Cawaling’s dismissal was not yet final pending his appeal before the Court of Appeals.

Bautista said they hoped that rehabilitation projects, mainly those included in the P25.27-billion Boracay Action Plan (BAP) that were started when the island was closed to tourists for six months in 2018, should be completed within the six-year term of Marcos.

The BAP is the rehabilitation and development plan for the island, which focuses on enforcement of laws and regulations, pollution control and prevention, rehabilitation and recovery of the ecosystem, and sustainability of island activities. A significant portion, P16.21 billion, was allotted for infrastructure while P5.13 billion was for pollution control and prevention.

Among the unfinished infrastructure projects are the drainage system, upgrading of the circumferential road and sewerage system.

The P1.94-million rehabilitation of the 21.64-kilometer circumferential road connecting the island’s three villages of Manoc-Manoc, Balabag and Yapak should be completed in 2023.

Malay Councilor Maylyn “Nenette” Aguirre-Graf, chair of the municipal council’s tourism committee, said the next administration should fast-track the completion of the drainage project as flooding continues on the island during heavy rains more than four years after major rehabilitation works started.

Aguirre-Graf said the perennial problem on land ownership should also be addressed as many property owners were still fearful they would be removed from their land. 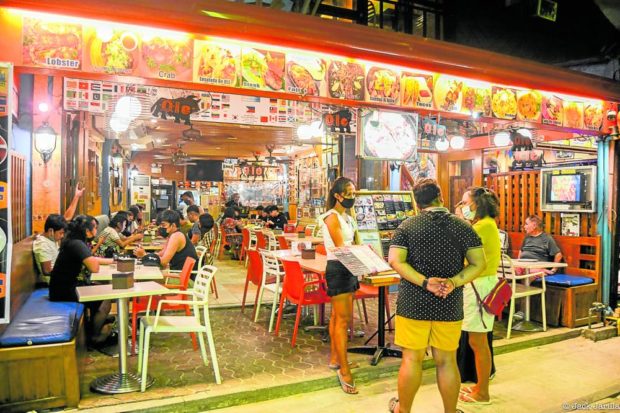 THEY ARE BACK | Domestic tourists are back with a vengeance on Boracay Island as shown in this photo taken on March 11, as the world-famous island resort continues to have record-high visitors during the pandemic. (Photo by JACK JARILLA)

Presidential Proclamation No. 1064 issued in 2006 by then-President Gloria Macapagal-Arroyo classified 628.96 hectares of land in Boracay as alienable and disposable (could be subjected to privatization) while 377.68 ha were classified as forestland or public land. The rest are protected areas. PP 1064 has been used as the basis for the removal of structures and occupants on areas classified as forestland.

The island has been seeing a surge in domestic travelers but foreign tourists were still minimal due to travel and health restrictions.

Tourist arrivals on the island resort in May reached 201,368 but only 4,268 of them were foreign tourists.

“Domestic tourists are practically double than before the pandemic but we are still trying to recover,” said business owner Jose Carlos “Binggoy” Remedios.

Aguirre-Graf said an in-depth study on the island’s carrying capacity should be conducted and made a basis for the regulation of tourist arrivals and sustainable development of the island, noting that the current carrying capacity was pegged in 2018 before the island underwent major rehabilitation.

In April, Puyat admonished local officials after tourist arrivals in April reportedly breached the island’s carrying capacity of 19,215 tourists at any given time. This was denied by officials, saying there was a confusion in the tourist arrival figures.

Residents were also asking if the Marcos administration would continue the Boracay Inter-Agency Task Force (BIATF), the body supervising the island’s rehabilitation that would be dissolved when the term of President Duterte ends on June 30; and if the bill creating the Boracay Island Development Authority (Bida) would be pursued.

Aklan officials and Boracay residents have opposed the creation of the Bida, meant to replace the BIATF, because it would only create a government-owned and -controlled corporation with corporate powers.

“The incoming president is a former governor [of Ilocos Norte] so he knows the role and importance of local government units,” Bautista said.

Boracay rehab projects to continue even after Duterte’s term