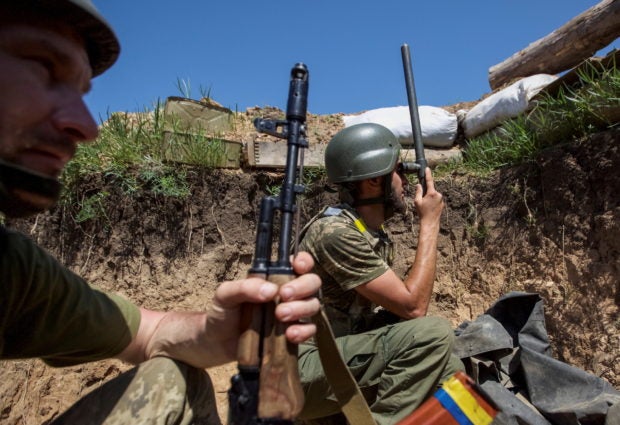 A Ukrainian service member uses binoculars at a position on the front line, amid Russia’s attack on Ukraine, in the town of Krasnohorivka, in Donetsk region, Ukraine June 3, 2022. (REUTERS)

KYIV  – Ukraine said on Saturday it had recaptured a swathe of the battlefield city of Sievierodonetsk, where intense fighting continued, in a rare counter-offensive against Russia’s main assault force that had been steadily advancing in the east.

The Ukrainian claim could not be independently verified, and Moscow said its own forces were making gains there. But it was the first time Kyiv has claimed to have launched a big counter-attack in Sievierodonetsk after days of yielding ground there.

Serhiy Gaidai, the Ukrainian governor of Luhansk province, which includes Sievierodonetsk, said overnight that Ukrainian forces previously in control of just 30% of the city had mounted a counter-attack, recapturing another 20% of it.

Russia has concentrated its forces on Sievierodonetsk in recent weeks for one of the biggest ground battles of the war, with Moscow appearing to bet its campaign on capturing one of two eastern provinces it claims on behalf of separatist proxies.

Both sides have claimed to have inflicted huge casualties in the fighting for the small industrial city, a battle that military experts say could determine which side has the momentum for a prolonged war of attrition in coming months.

Ukrainian Defence Minister Oleksiy Reznikov on Saturday said that while it was impossible to predict when the war would end, “my optimistic prognosis is that it is realistic to achieve this as early as this year,” the defence ministry said.

In the diplomatic sphere, Kyiv rebuked French President Emmanuel Macron for saying it was important not to “humiliate” Moscow, drawing sharp rebukes from top Ukrainian officials.

“We must not humiliate Russia so that the day when the fighting stops we can build an exit ramp through diplomatic means,” Macron said in an interview with regional newspapers published on Saturday, adding he was “convinced that it is France’s role to be a mediating power.”

Ukrainian Foreign Minister Dmytro Kuleba tweeted in response: “Calls to avoid humiliation of Russia can only humiliate France and every other country that would call for it.

“Because it is Russia that humiliates itself. We all better focus on how to put Russia in its place. This will bring peace and save lives.”

“The terrible consequences of this war can be stopped at any moment … if one person in Moscow simply gives the order,” Zelensky said, in an apparent reference to Russian President Vladimir Putin. “And the fact that there is still no such order is obviously a humiliation for the whole world.”

Ukraine now says its aim is to push Russian forces back as far as possible on the battlefield, counting on advanced missile systems pledged in recent days by the United States and Britain to swing the war in its favour.

Asked about Macron’s mediation offer on national television, Ukrainian presidential adviser Mykhailo Podolyak said: “Until we receive weapons in their full amount, until we strengthen our positions, until we push them (Russia’s forces) back as far as possible to the borders of Ukraine, there is no point in holding negotiations.”

Moscow has said the Western weapons will pour “fuel on the fire,” but will not change the course of what it calls a “special military operation” to disarm Ukraine and rid it of nationalists.

Russia’s RIA news agency quoted Putin as saying Moscow was easily coping with U.S. weapons systems sent to Ukraine and had destroyed dozens of them.

Russia’s defence ministry said its troops were forcing the Ukrainians to withdraw across the Siverskiy Donets river to Lysychansk on the opposite bank.

Gaidai said the Russians were blowing up bridges across the river to prevent Ukraine’s bringing in military reinforcements and delivering aid to civilians in Sievierodonetsk.

“Right now, our soldiers have pushed them back, (the Russians) are suffering huge casualties,” Gaidai said in a live TV broadcast. “The Russian army, as we understand, is throwing all its efforts, all its reserves in that direction.”

Tens of thousands are believed to have died, millions have been uprooted from their homes, and the global economy has been disrupted in a war that marked its 100th day on Friday.

Zelenskiy posted footage on Saturday of an important timber Orthodox Christian monastery ablaze in eastern Ukraine. Kyiv says two monks and a nun were killed at the site on Wednesday when it was struck by Russian shells.

“Every church burned by Russia in Ukraine, every school blown up, every destroyed memorial proves that Russia has no place in UNESCO,” he said, calling for Moscow to be expelled from the main cultural body of the United Nations.

The war has had a devastating impact on the global economy, especially for poor food-importing countries.

Ukraine is one of the world’s leading sources of grain and cooking oil, but those supplies were largely cut off by Russia’s closure of its Black Sea ports, with more than 20 million tonnes of grain stuck in silos.