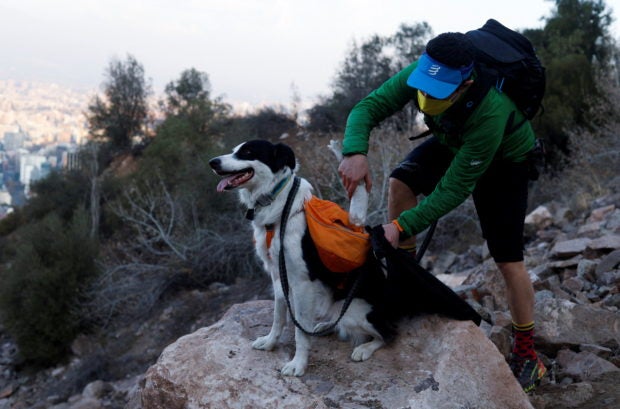 Gonzalo Chiang and his dog Border Collie named Sam, pick up a discarded plastic bottle for keeping clean the metropolitan park (Parquemet) of Santiago, Chile May 31, 2022 Picture taken May 31, 2022. (REUTERS)

SANTIAGO  – Sam, the four-legged superhero, works to keep a park in Chile’s capital clean and green. The dog’s superpower? Collecting garbage as a role model for visitors.

The border collie, who takes regular walks in Santiago’s metropolitan park with his owner, has become famous wearing a green cape in a comic used as an educational guide.

It all started when Sam and Gonzalo Chiang had to stop again and again in the city’s largest green area to pick up plastic bottles, masks, cans and food packages.

“On Sam’s walks we began to find a lot of garbage,” Chiang said in an interview. “From that, the need to come prepared to take away the garbage that we found on each visit arose.”

In April alone, Sam and Gonzalo collected 602 masks, 585 bottles and 304 cans in addition to clothing, helmets and food wrappers, according to an official count.

“The walk is a good opportunity to clean, rather than litter,” Chiang said.

Park officials were impressed by Sam, who visits the tourist attraction at least three times a week, and decided to use his image in its park care campaign.

Catalina Aravena turned the 5-1/2 year-old collie into a cartoon in “Sam: The Parquemet Superhero,” telling visitors to take their waste with them or use one of the more than 40 recycling points throughout the park.

“This became much more widespread than expected,” Aravena said. “It reached different schools and it has been spread very well on social media.”

Sam and Gonzalo “have inspired us to accelerate this education process and structure this garbage classification,” said Eduardo Villalobos, the park’s acting director.