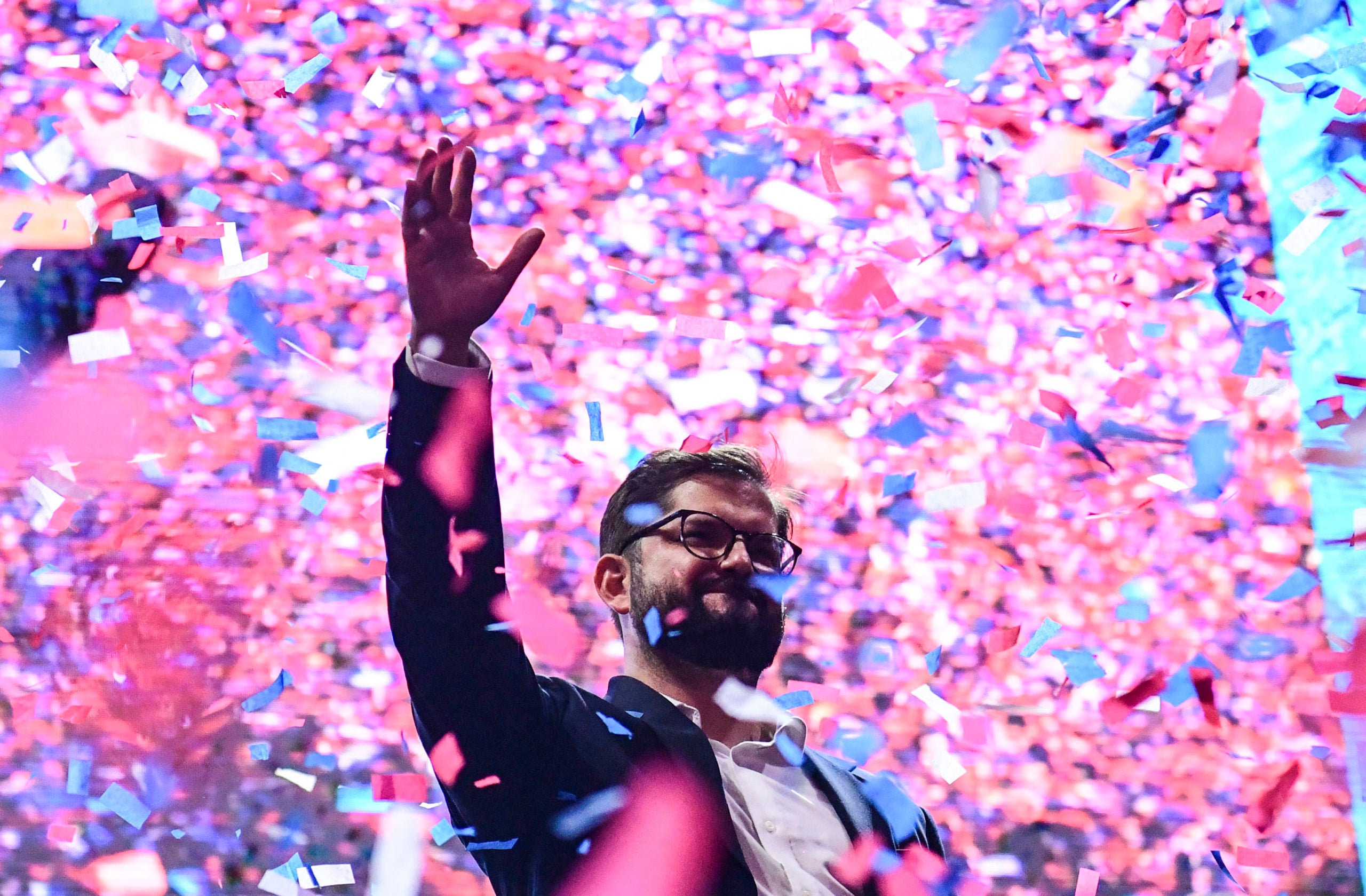 (FILES) In this file photo taken on December 19, 2021 Chilean President-elect Gabriel Boric waves at supporters after delivering a speech in Santiago. Photo by MARTIN BERNETTI / AFP)

PUNTA ARENAS, Chile — As he is sworn in as Chile’s youngest ever president, leftist Gabriel Boric will be breaking new ground in more ways than one on Friday.

The 36-year-old, one of the youngest heads of state in the world, has vowed to send Chile’s once-lauded neoliberal economic model — which dates back to the Augusto Pinochet dictatorship — to the “grave” but that is not the only way he will ruffle the establishment’s feathers.

Whether refusing to wear a tie, shunning the upscale neighborhoods of Chile’s political elites or naming a majority woman cabinet, Boric has already shown his presidency will be a clean break from what has come before in the South American country.

The former student activist only just met the required minimum age to run in last year’s presidential race, seven years after being elected to his first political job as a member of Chile’s Chamber of Deputies.

But his promise to install a “welfare state” in one of the world’s most unequal countries, coupled with a progressive social, ecological and feminist agenda, saw him prevail over far-right rival Jose Antonio Kast in December’s election run-off.

“If Chile was the cradle of neoliberalism in Latin America, it will also be its grave,” Boric said on the campaign trail.

The millennial leader of the Approve Dignity coalition that includes Chile’s Communist Party, Boric has already aroused suspicion in a country where communist doctrine has few fans.

Despite those fears, his social welfare program proved popular enough to see him trounce Kast in the run-off.

He has distanced himself from other leftist governments in Latin America accused of authoritarianism.

“Venezuela is an experience that has failed and the main proof is the six million strong Venezuelan diaspora,” said Boric in January.

He has also slammed the Russian invasion of Ukraine and the repression of opposition figures in Nicaragua.

Boric has promised to reduce the work week from 45 to 40 hours, to advance “green development” and to create 500,000 jobs for women.

His 24-member cabinet even has a majority of 14 women.

He has also vowed to reform Chile’s pension and healthcare systems to promote access for the poor in a country where one percent owns 25 percent of the wealth, according to one UN agency.

“His honesty and transparence, his openness to dialogue are two of Gabriel’s greatest virtues,” said his 33-year-old journalist brother Simon.

Boric backed the 2019 anti-government revolt that resulted in dozens of deaths in clashes with police, and prompted a referendum that resulted in a process to rewrite Chile’s pro-business, dictatorship-era constitution.

‘Let’s do the impossible’

In 2011, he led student protests for free schooling.

His detractors say Boric is inexperienced in politics, and he himself has conceded he has “much to learn.”

But supporters say his lack of ties to the traditional ruling elite, increasingly viewed with hostility, counts in his favor.

He also cemented that difference by choosing to live in the largely dilapidated but historic neighborhood of Yungay — on a road called “Orphans” that sits between others called “Liberty” and “Hope.”

Boric, of Croatian and Catalan descent, has abandoned the unkempt, long hair of his activist days, seeking to build a more consensual and moderate image.

But while he has adopted jackets, he shuns ties and makes no attempt to hide his tattoos.

He supports marriage of same-sex couples and abortion rights.

Boric was born in Punta Arenas in Chile’s far south. He is the oldest of three brothers and moved to the capital to study law, though he never sat for his bar exam.

He lives with his political scientist girlfriend Irina Karamanos — has no children and is an avid reader of poetry and history.

“I come from the south of Patagonia where the world begins, where every story and the imagination meet.”

His father, Luis Boric, told AFP a few months ago that the new president had been politically minded from a young age, painting messages such as “let’s be realistic, let’s do the impossible” and “reason makes strength” on the wall of his childhood bedroom.

“He wants to produce real change in society. He wants to eliminate many injustices that we have today,” said the 75-year-old.