Ukrainian forces have had some success in Severodonetsk, says Zelensky | Inquirer News

Ukrainian forces have had some success in Severodonetsk, says Zelensky 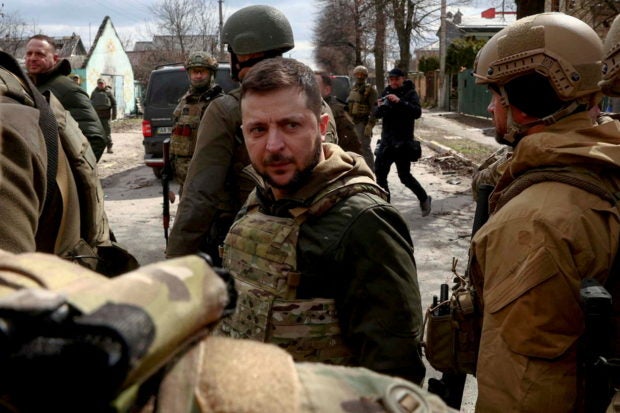 FILE PHOTO: Ukraine’s President Volodymyr Zelensky looks on as he is surrounded by Ukrainian servicemen as Russia’s invasion of Ukraine continues, in Bucha, outside Kyiv, Ukraine, April 4, 2022. REUTERS/Marko Djurica/File Photo

Ukrainian forces have had some success fighting Russians in the city of Severodonetsk but the overall military situation in the Donbas region has not changed in the day, President Volodymyr Zelensky said on Thursday.

In a late night video address, Zelensky also thanked U.S. President Joe Biden for promising to send missiles and said he expected good news about weapons supplies from other partners.

Russian forces, backed by heavy artillery, control most of the eastern industrial city of Severodonetsk but fighting is continuing, say Ukrainian officials.

“The situation in the Donbas has not changed significantly over the last 24 hours. We have had some success in the battles in Severodonetsk,” said Zelensky, adding it was too early to give details.

He also slammed what he called the “absolutely senseless shelling” of northern border regions from Russian territory.

“The entire temporarily occupied territory of our state is now a zone of complete disaster, for which Russia bears full responsibility,” he said.