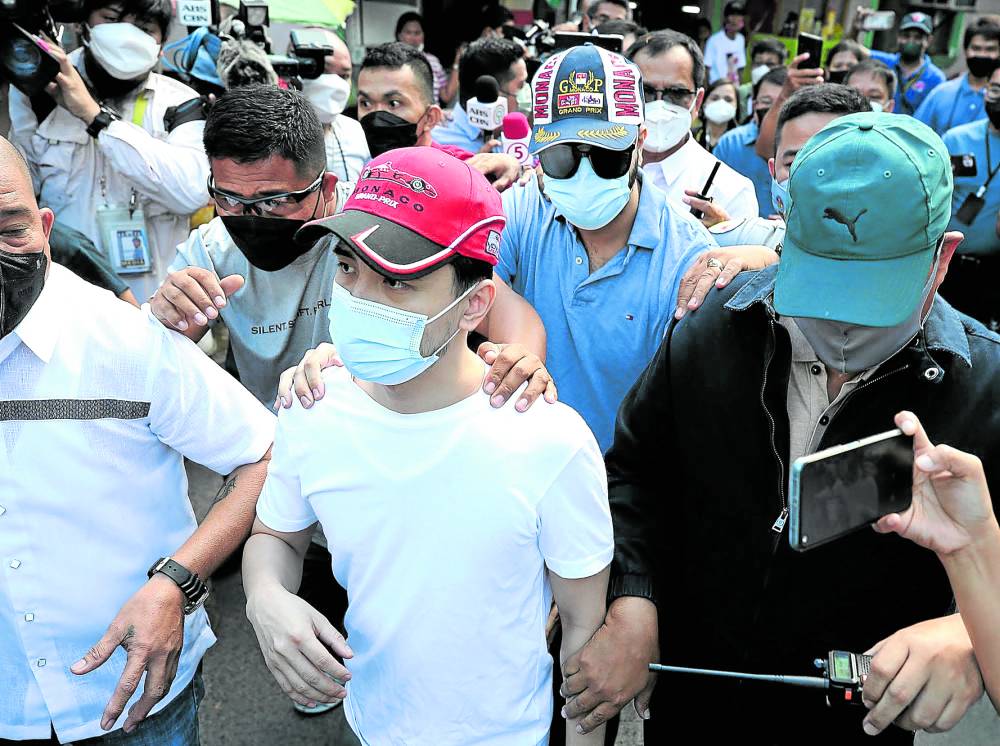 AND JUST LIKE THAT . . . They’re free. Pharmally executives Linconn Ong (in red cap) and Mohit Dargani (in dark glasses) are released from Pasay City Jail on Thursday after seven months in detention for refusing to cooperate in a Senate blue ribbon committee investigation. —RICHARD A. REYES

The Senate on Thursday ordered the release of two detained executives of Pharmally Pharmaceuticals Corp., the severely undercapitalized company which its blue ribbon committee found to have won the lion’s share of contracts from a P42-billion pandemic response fund of the Department of Health.

Senate President Vicente Sotto III issued separate release orders for Mohit Dargani, the company’s secretary and treasurer, and board director Linconn Ong, who had been held at Pasay City Jail since Nov. 29 last year after they were declared in contempt of the Senate for not cooperating with the blue ribbon investigation.

They were initially detained, along with Dargani’s sister, company president Twinkle Dargani, at the Senate compound, but their alleged attempt to mislead senators about the location of financial documents prompted the blue ribbon committee to order the transfer of the two men to the city Jail.

Sotto’s June 2 release order was one of his last acts as Senate president. He lost the vice presidential race in the May 9 elections.

The company executives were among those recommended to be charged with plunder, graft, perjury and tax evasion in connection with alleged irregularities in Pharmally’s contracts amounting to P11.11 billion with the Procurement Service of the Department of Budget and Management (PS-DBM).

The company, which had a paid-up capital of only P625,000 when it was incorporated less than a year before the COVID-19 pandemic struck the country in March 2020, became the center of the Senate investigation of the government’s purchases of pandemic supplies.

The blue ribbon committee report authored by its chair, Sen. Richard Gordon, also recommended the prosecution of President Duterte for betrayal of public trust when he allegedly defended those involved in the irregularities.

In an interview with reporters on Wednesday night, Gordon said he objected to Sotto’s order to release Dargani and Ong.

“I told him, ‘Mr. President, I disagree. But I will bow down to your authority,’” he said.

Gordon said the two men should have remained in detention until June 30, which is the end of the term of the current Congress. Senate Minority Leader Franklin Drilon agreed with him.

But for Sotto, the “end of the Congress” is when it adjourns sessions on June 3, Thursday, based on the Senate calendar.Dargani and Ong did not make any statement to reporters as they were led out of Pasay City Jail.

Their lawyer, Ferdinand Topacio, said they were willing to face charges that may be filed against them in the courts.

“We welcome that,” he said. “At least the courts have rules, they are supporting rules of fair play, there are procedures and legal representation, unlike what Sen. Gordon did, which was like a kangaroo court.”

“As they both try to reclaim their lives and make up for time lost, they wish to say that their ordeal did not in any way diminish their resolve to continue doing business and to be of help to the Filipino people, so as to send the clear message to the business community that whatever happens, as businessmen, they all have a role to play, no matter the cost to themselves, to be partners in economic recovery,” Topacio said.

Dargani, his sister and Ong were declared in contempt of the Senate and were ordered arrested after they refused to provide or disclose the location of documents related to their transactions with PS-DBM. Twinkle denied having any hand in the deals with the procurement agency.

The three Pharmally officers also gave conflicting and evasive answers to senators who sought an explanation for the irregularities they found in Pharmally’s contracts with the PS-DBM.

Ong was the first to be ordered arrested by the Senate. He was placed under house arrest for nearly two weeks after he supposedly contracted COVID-19.

He was picked up from his home in September last year while virtually attending a Senate hearing, and was detained at the Senate.

The Dargani siblings were nabbed on board a private plane at the Davao City International Airport as they were about to fly to Malaysia on Nov. 15.

In January, the Senate blue ribbon released Twinkle “on humanitarian consideration,” as she was supposedly battling depression, and was placed under house arrest.

Gordon’s report failed to get the signatures of majority of its 20 members, which are needed for it to be brought out for plenary discussions.

As a result, it would be archived and its recommendations would not be acted upon by the proper authorities.

Opposition Sen. Risa Hontiveros on Wednesday said she was willing to revive the blue ribbon’s investigation and “to pick up from where it left off.”