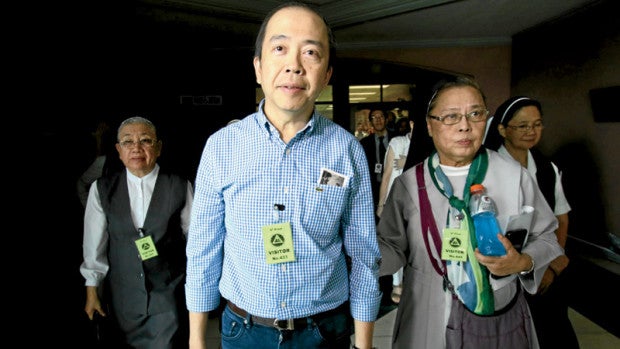 “Yes, we confirm that Jun Lozada is in the custody of the NBI. Still checking on other details,” Lavin told the Inquirer in a Viber message.

Lozada, along with his brother Orlando, turned himself in to the NBI after the Sandiganbayan reportedly issued an arrest warrant against them in connection with the Supreme Court decision affirming their conviction for a land deal involving the state-owned Philippine Forest Corp. (PFC).

In a ruling dated July 28, 2021, but made public only recently on its website, the Supreme Court denied the Lozada brothers’ petition for review of the Sandiganbayan decision finding them guilty of graft and sentencing them to 6-10 years imprisonment and perpetual disqualification from holding public office.

A family member of Lozada, who requested anonymity, also confirmed that Lozada and his brother are now at the NBI office along Taft in Manila.

The relative, who claimed they learned of Lozada surrendering to the NBI only in the news, was also asking for prayers for the kin’s safety.

Last week, Lozada, an IT expert and former president and CEO of the PFC, said he has no regrets for “siding with the truth” even as the Supreme Court affirmed his conviction.

“My enemies made good with their threats that they will make me regret telling the truth,” Lozada said in a statement addressed to his family and friends and informing them “with sadness” that the high court had denied his appeal.

He asked his family and friends to “accompany me with your prayers,” and thanked them for their support.

It was Lozada who blew the whistle on the supposed cost-padding and bribery involved in the NBN-ZTE deal, which was to have resulted in a telecommunications network linking government offices nationwide.

His testimony at a Senate inquiry in 2008, in which he tagged then President Gloria Macapagal Arroyo and her husband as the “masterminds behind the NBN-ZTE crime,” led to the cancellation of the deal.

He also testified that then Commission on Elections Chair Benjamin Abalos Sr. stood to gain a huge commission from the deal.

Four years after his testimony, the Sandiganbayan filed graft charges against Lozada and his brother.

In August 2016, the Sandiganbayan’s 4th Division found Lozada guilty of one count of graft for awarding the lease contract of 6.599 hectares of public land under the PFC’s Lupang Hinirang Program to his brother Orlando without undergoing the regular application process. Orlando was likewise found guilty of graft.

Justice Secretary Menardo Guevarra also confirmed that Lozada is now at the NBI.

“But he will be transferred to the National Penitentiary to serve his sentence. When, it depends on the order of commitment by the court. Unfortunately, I have no copy of such order,” said Guevarra.

Sent to prison, NBN-ZTE deal whistleblower has no regrets

Read Next
Nat’l Museum of Fine Arts closed from June 6 to July 4 for Bongbong Marcos oath-taking
EDITORS' PICK
Bongbong Marcos says PH ‘open for business’ with new Clark Airport terminal
Individuals affected by ‘Karding’ now over 157,000
Newbie gamers are in for a treat with the power-packed feature of vivo Y16
Karding damage to infrastructure at P23M
House energy committee chair Arroyo bats for cheap electricity
Reignite your passion with the vivo Y35
MOST READ
Angelica Panganiban ‘duguan, sugatang mom’ one week into breastfeeding
LPA enters PAR, may develop into tropical depression
Badoy not with Office of the President, NTF-Elcac, under Marcos admin — solon
Charges readied vs gov’t guard with P290-M deposits
Don't miss out on the latest news and information.