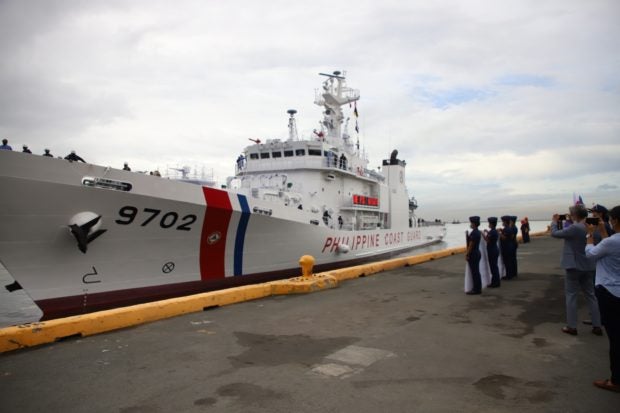 MANILA, Philippines — The Philippine Coast Guard (PCG) on Wednesday welcomed the arrival of its newest multi-role response vessel (MRRV) in the country to be commissioned as BRP Melchora Aquino.

PCG commandant Admiral Artemio Abu led the welcome ceremony of the MRRV-9702 at the PCG headquarters in Port Area, Manila.

According to PCG, the vessel, which is modeled after the Japan Coast Guard Kunigami-class vessel, has a maximum speed of not less than 24 knots and an endurance of not less than 4,000 nautical miles.

“It is also capable of conducting sustained maritime patrols in the country’s maritime jurisdictions, including the West Philippine Sea and Philippine Rise,” the Coast Guard said in a statement.

Abu also said: “The arrival of this vessel sends a strong message that our country is moving ahead as a maritime nation.”

Posted by Philippine Coast Guard on Tuesday, May 31, 2022

The BRP-Melchora Aquino is the second 97-meter MRRV in the country, following the BRP Teresa Magbanua or MRRV-9701, which was commissioned into the Coast Guard service in May.

The said vessels were procured under Phase 2 of the Maritime Safety Capability Improvement Project, a Japanese-assisted project funded through a loan from the Japan International Cooperation Agency (JICA).

The two vessels were bought for 14.6 billion yen through a 16.5-billion yen official development assistance loan from the JICA.