Gordon asks senators to reveal stand on Pharmally probe: ‘We can’t shrink from our duty’ 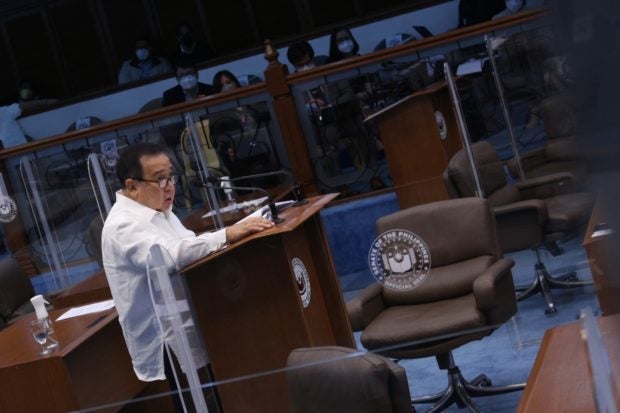 MANILA, Philippines — Senator Richard Gordon on Tuesday urged his colleagues to reveal their stand on his committee’s Pharmally investigation as it has yet to formally reach the Senate floor due to a lack of signatures.

“The Senate’s full disclosure on the Pharmally plunder controversy achieves closure for our people. I am doing this as a chairman in quandary. I respect my fellow members. I respect the Filipino people. We cannot shirk from our responsibilities or our duty to act on a committee report by not signing it, either in agreement or disagreement,” Gordon said in a privilege speech delivered during Tuesday’s plenary session.

“People of this country should not be denied a judgment or at the very least, a debate on whether there was mal/mis/nonfeasance,” he added.

So far, nine senators, including Gordon, have signed the report – two votes short before a draft committee report can be put forward to the plenary. The panel’s investigation spanned 18 hearings within seven months.

The 18th Congress is set to adjourn sine die on June 3.

According to Gordon, his office has last officially followed up with the senators regarding their stand on the draft committee report through a letter on May 20.

“I look forward to clarity on the respective positive or negative responses of our senators, who are representatives of the people and who possess a national constituency. We require your vote, so we can bring Pharmally to the plenary. If you are voting for or against our report, let us make it clear in the record,” he added.

Gordon stressed that the report asserts the Senate’s independence.

“It is an act of the Senate that declares: No more impunity! We recommend the investigation and/or punishment of those responsible for this rape of our scarce coffers, made worse because the acts were committed at a time of great need- and when the survival of our own people was in peril,” he said.

“We must exact accountability, particularly from our public servants. We must ensure that none of those responsible go scot- free. Our collective voices through this report can be loud enough to rouse the Ombudsman from apparent slumber. What will happen to our country and its people if nothing is done to these malefactors? Never again we must shout to the highest heavens. Never again!,” he added.