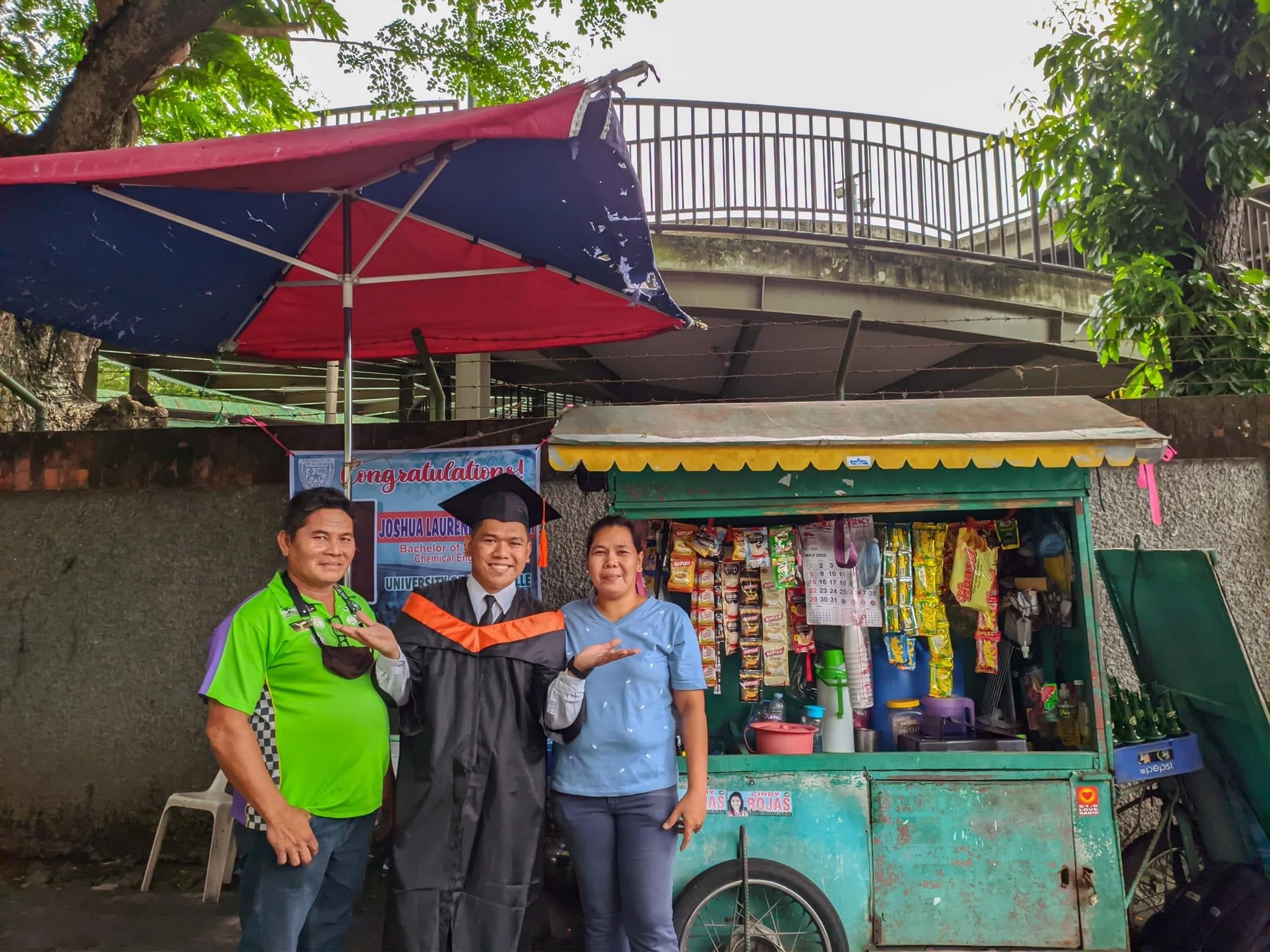 Joshua Mahilum, with his parents Jennifer and Ramil, stands beside his mother’s stall next to the University of St. La Salle campus. (Photo courtesy of Joshua Mahilum)

BACOLOD CITY––The son of a sidewalk vendor and a tricycle driver graduated with a degree in chemical engineering from the University of St. La Salle (USLS) in Bacolod City.

Joshua Mahilum, 22, a scholar of USLS and the Department of Science and Technology (DOST), also received, on Sunday, a certificate from the College of Engineering and Technology as an Outstanding Student.

Mahilum attributed his achievement to God’s goodness and his mother’s insistence on enrolling in La Salle even if they did not have the money for it.

His mother, Jennifer, 47, who finished Grade 2, sells food to drivers who park their vehicles outside the USLS campus.

His father, Ramil, 51, was an electrician but met with an accident and lost his right leg. With a prosthetic leg, he drives a tricycle near the USLS campus.

Mahilum said his mother pushed him and his sister to get college degrees at USLS on scholarships because she did not want them to go through hardships that she went through.

Mahilum graduated a salutatorian from the Vista Alegre Elementary School, and with first honor (equivalent to valedictorian) from junior high school at the Luis Hervias National High School (LHNHS).

Since LHNHS did not offer Science, Technology, Engineering, and Mathematics, his mother prodded him to enroll at USLS.

“I was hesitant at first because, first and foremost, it is very, very expensive, and I did not know how to interact with rich kids, but my mother was persistent and made it possible,” he said.

He went through a rigorous selection process for his senior high school scholarship at USLS. When asked what a scholar should possess, Joshua said: “Attitude, because intelligence, talent, and skills are nothing without attitude and good manners.”

Four days later, he was one of those who made it as a full scholar of the Liceo De La Salle SHS, he said.

“For two years, I only paid P2 to print a form before every exam,” he said.

Mahilum said during his first semester in Grade 12 he saw his classmates rushing out of the university to go to the DOST office to apply for scholarships, so he went with them. When he was filling out his application form, he learned that he had to pay a P200 fee. Luckily, one of his classmates lent him the money.

Mahilum said he passed the DOST scholarship that would pay for half of his college tuition but there were still thousands of pesos to raise for the other half, which his parents could not afford.

That was when his mother reached out again for help at the USLS Admissions Scholarships Office, enabling him to obtain an academic scholarship to pay for the other half of his tuition.

He also received a monthly allowance from DOST that enabled him to buy a second-hand laptop and install a Wi-Fi connection at his house for school.

Mahilum now works as an online virtual assistant to earn money to pay for his review classes for the chemical engineering board examination.

When he passed the board, Mahilum wanted to get a job in an industrial firm and continue serving God through his singing and multimedia work. He is a member of the Church of God Bacolod.

His sister Honney Jane Laurenia, also a USLS scholar, works as a part-time teacher at the university, while his brothers, Jonnas and Joram, are in grade school at the LHNHS.

Mahilum, on his Facebook page, wrote that he always dreamt of being interviewed by reporters together with his mother and telling them how God has been good to them since the beginning.

He hopes his story reaches even just one kid stricken with poverty, at the point of giving up, and inspired by it.

“My story as a beneficiary of several scholarships is a testament that yes, definitely, there is a way. There is hope even if you are poor, “he said.

“Poverty is not a hindrance to success as long as there are opportunities,” he added.