Ukrainan defenders hold out in Donbas city under heavy fire 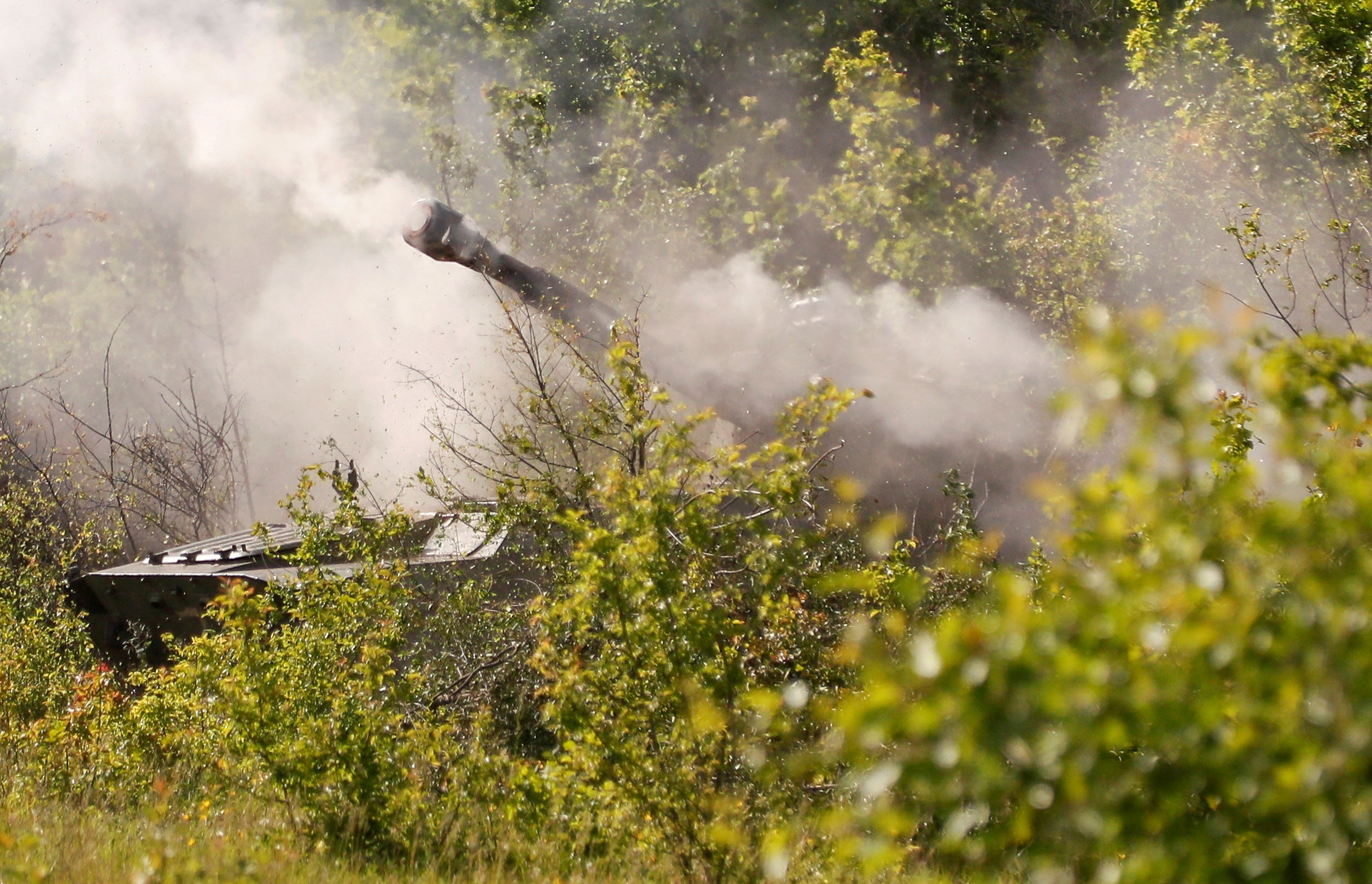 Smoke rises above a self-propelled howitzer 2S1 Gvozdika of pro-Russian troops, which fired a leaflet shell in the direction of Sievierodonetsk to disperse information materials from combat positions in the Luhansk region, Ukraine May 24, 2022. REUTERS/Alexander Ermochenko

KYIV — Ukrainian forces were on Sunday resisting a Russian assault on Sievierodonetsk, the largest city they still hold in the eastern Donbas region, but were weathering heavy artillery barrages, Ukrainian officials said.

The shelling was so intense it was not possible to assess casualties and damage, the governor of Luhansk region, Serhiy Gaidai, said. Dozens of buildings have been destroyed in the past few days.

The Ukrainian government meanwhile urged the West to provide it with more longer-range weapons in order to turn the tide in the war, now in its fourth month.

The battle for Sievierodonetsk, which lies on the eastern side of the Siverskyi Donets River, has become the focus of attention as Russia ekes out slow but solid gains in the Donbas, comprising of the Luhansk and Donetsk regions.

Russia has concentrated huge firepower on a small area, a contrast to earlier phases of the conflict when its forces were often spread too thinly.

Analysts at the Washington-based Institute for the Study of War said the Russians had still not managed to encircle city and the Ukrainian defenders have inflicted “fearful casualties” on them.

But the Ukrainians were also taking serious losses themselves, civilian as well as combatants, they said in a briefing paper.

“Russian President Vladimir Putin is inflicting unspeakable suffering on Ukrainians and demanding horrible sacrifices of his own people in an effort to seize a city that does not merit the cost, even for him,” they said.

Russia’s fixation on Sievierodonetsk had drawn resources from other battlefronts and as result they had made little progress elsewhere.

“The Russian invasion of Ukraine that aimed to seize and occupy the entire country has become a desperate and bloody offensive to capture a single city in the east while defending important but limited gains in the south and east,” they said.

Ukrainian President Volodymyr Zelenskiy said the military situation in the Donbas – parts of which are controlled by Moscow-backed separatists – was very complicated but defenses were holding up in a number of places, including Sievierodonetsk and Lysychansk.

“It’s indescribably difficult there. And I am grateful to all those who withstood this onslaught,” he said in his nightly video address.

Zelenskiy also voiced hopes that Ukraine’s allies would provide much-needed weapons and he expected “good news” in the coming days.

Presidential adviser Mykhailo Podolyak repeated a call for U.S.-made long-range multiple-rocket launchers. U.S. officials have told Reuters such systems are actively being considered, with a decision possible in coming days.

“It is hard to fight when you are attacked from 70 km away and have nothing to fight back with,” Podolyak posted on Twitter.”We need effective weapons.”

Zelenskiy said in a television interview he believed Russia would agree to talks if Ukraine could recapture all the territory it has lost since the invasion, launched by Putin on Feb. 24.

Still, Zelenskiy ruled out the idea of using force to win back all the land Ukraine has lost to Russia since 2014, which includes the southern peninsula of Crimea, annexed by Moscow that year.

“I do not believe that we can restore all of our territory by military means. If we decide to go that way, we will lose hundreds of thousands of people,” he said.

Russia says it is waging a “special military operation” to demilitarize Ukraine and rid it of nationalists threatening Russian-speakers there. Ukraine and Western countries say Russia’s claims are a false pretext for a war of aggression.

Thousands of people, including many civilians, have been killed and several million have fled their homes, either for safer parts of Ukraine or to other countries.