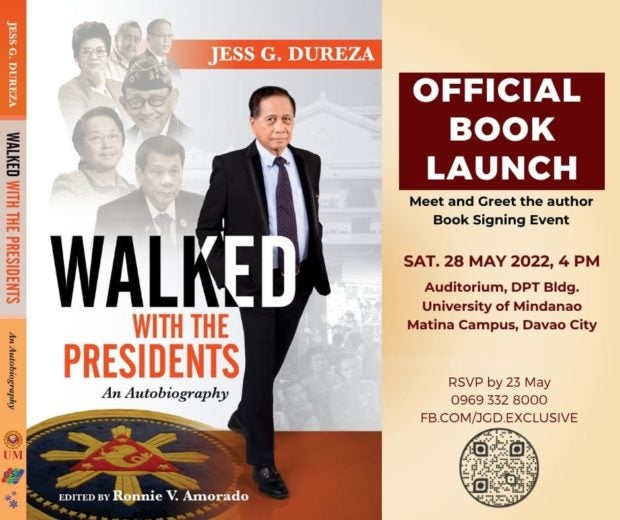 “Walked with the Presidents: An Autobiography” by Jess G. Dureza was launched on Saturday, May 28, 2022m at the University of Mindanao Matina Campus in Davao City.

“It’s a long walk for about 32 years with six presidents, that is why I did not run for senator [in the 2022 elections],” he said during the launch at the University of Mindanao auditorium on Saturday afternoon.

The book was edited by Ronnie Amorado, senior vice president of the University of Mindanao, the mother company of The Mindanao Times newspaper where Dureza is the publisher.

“The author reveals how he navigated through the halls of power and how the Philippine presidents played their roles and influenced the outcomes of their decisions,” Amorado said as he mentioned the key crises when Dureza was at the frontlines.

Amorado added that the book “brings us back to those past 30 years that unfolded with lots of privileged information and insightful scrutiny unbeknownst to the public.”

It remains to be seen whether Dureza will serve another tour of duty in government as he was reported to have been among those active in the campaign of now President-elect Ferdinand Marcos Jr.

Serafin Ledesma Jr., the master of ceremonies during the book launching, said it was Dureza who coined the BBM-Sara Uniteam, the campaign slogan of the tandem of Marcos and Davao City Mayor Sara Duterte, who is now the vice president-elect.

Dureza began a professional career as a journalist while studying to become a lawyer at the Ateneo de Davao University.

He first got a taste of government work when he won the congressional seat of Davao City’s the First District in 1987, beating fellow lawyer and later House speaker Prospero Nograles.

Nograles won an electoral protest and took over the seat in 1989.

Then-President Corazon Aquino appointed Dureza as director of the Philippine Coconut Authority the year he lost his congressional seat. He took over the same seat in 1992 as he faced nearly no resistance as his political nemesis, Nograles, decided to battle against then reelectionist mayor Rodrigo Duterte but miserably lost.

Under President Fidel Ramos, Dureza was the presidential assistant for Mindanao and later chair of the Mindanao Economic Development Council (Medco), a post he continued to hold under President Joseph Estrada.

During President Gloria Macapagal-Arroyo’s term from 2001 until 2010, Dureza held various positions, among which was as chair of the government panel negotiating with the Moro Islamic Liberation Front, presidential adviser on the peace process, presidential spokesperson, presidential legal counsel, and chair of the Mindanao Development Authority (MinDA), which has a Cabinet rank and is tenured.

He continued as MinDA chair when President Benigno Aquino III took office but eventually tendered his courtesy resignation to give the new president a free hand to pick his choice of Cabinet members.

It was just sad that then-Interior Secretary Manuel Roxas II announced that he was fired from the post, Dureza noted during the book launch.

When President Duterte, a high school classmate, took office in 2016, Dureza was back as presidential adviser on the peace process. But Dureza resigned out of courtesy after two of his subordinates were fired by the president for alleged involvement in corruption.

Palace lauds Dureza for resigning out of ‘delicadeza’