TAGBILARAN CITY — A town center in Bohol province, which became a tourist destination, has been conferred the Haligi ng Dangal Awards 2022 under People’s Choice Category at the Metropolitan Theater in Manila on Saturday, May 28.

For this year’s event, the other two honorees were Teatro Amianan of the University of the Philippines-Baguio City for Architecture which is designed by Archt. Aristotle Go, and Bulacan Capitol Garden of Bulacan Capitol Compound in Malolos City for Landscape Architecture which is designed by L.Archt. Madonna Danao, L.Archt. Ross Pabustan and L.Archt. Danilo Flores. 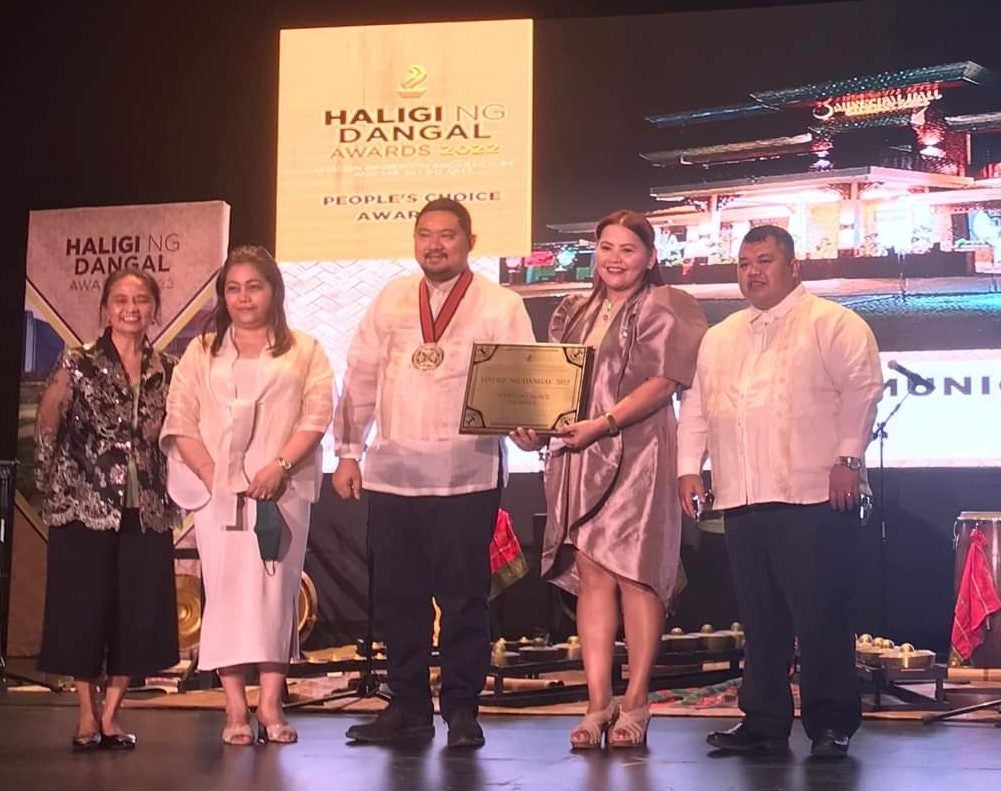 Reelected Bohol Catigbian Mayor Elizabeth Mandin holds the plaque after her town hall received the Haligi ng Dangal Awards 2022 under People Choice Category at the Metropolitan Theater in Manila on Saturday, May 28, 2022. She is accompanied by Archt. German Janus Niño Guidaben and Benjie Oliva. (Contributed photo)

The Catigbian town center was damaged by the 7.2-magnitude earthquake on Oct. 15, 2013.

The Bohol Earthquake Assistance Fund paved the way for the construction of the Catigbian Municipal Town Center, a testament of how Boholanos have transcended hardships by rebuilding major government edifices.

The creative integration of local architecture exemplifies the virtue of a sense of place and pride of identity.

The municipal town center has become a destination as locals and foreign tourists would stop and have their pictures taken with the building as the background.

Guidaben felt so much pride and joy seeing that the design through architecture enshrines empowerment of the people and the community for it intensifies the sense of identity of the locality.

He incorporated the architectural elements found in heritage houses and structures seen commonly in Catigbian into the design of the town hall.

Guidaben studied heritage conservation in University of Rome in 2013, Theater architecture in Antwerp, Belgium in 2016, and the architect representative for the Prague Quadrennial theater exposition in the Czech Republic in 2011.

He is an active member of the United Architects of the Philippines and became the president of the Bohol chapter for three consecutive terms from 2018 to 2020.

He is also an international associate of the American Institute of Architects and has attended the AIA conferences in New York and Las Vegas in 2018 and 2019.