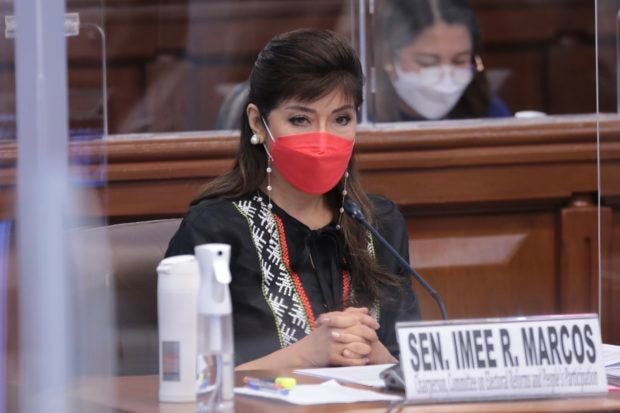 MANILA, Philippines — Senator Imee Marcos on Saturday said she is recommending personalities associated with “dilawan” and “pinklawan” to be appointed under the administration of president-elect Ferdinand “Bongbong” Marcos Jr.

The term “dilawan” is associated with the opposition while the word “pinklawan” is the portmanteau of pink and dilaw (yellow), referring to the campaign colors of the Liberal Party and vice president Leni Robredo.

Sen. Imee said she is doing this to stay true to the “unity” mantra of the incoming administration.

(Now, all of us are submitting names to be included [in the administration] and many of my recommendations are those said to be yellows and pinklawan.)

She, however, did not identify the so-called “dilawans” and “pinklawans” that she is recommending to be included in Marcos Jr.’s administration.

The senator also noted that many of the appointees are not allies with the incoming administration.

(To be honest, a technocrat has no politics in his blood. Many of them have no political colors. The others, maybe, let’s admit that we were not allies with them before, but there is nothing wrong to recruit them if they are really good.)

(And from what I know, many of the names being vetted are not strictly red, or let’s say our allies, but those who are really capable.)

“So I’m hopeful that we will get the best and the brightest.”

RELATED STORY:
LIST: Who are the members of Marcos Cabinet?