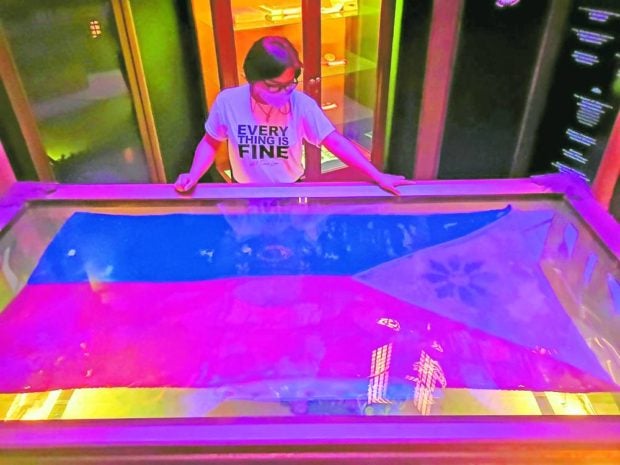 FRAGILE RELIC The Philippine flag which Gen. Emilio Aguinaldo unfurled when he declared independence from Spanish rule in 1898 is losing its battle with time. Now over 120 years old, the relic is being preserved at the Emilio Aguinaldo Museum in Baguio City and will be open for scheduled viewing until June 12, according to museum caretaker CJ Santamaria (in photo). —EV ESPIRITU

BAGUIO CITY—The country’s original flag is slowly losing its battle to the ravages of time, prompting its custodian to ask Filipinos to visit the summer capital and see the relic while it remains intact.

The flag was officially unveiled on June 12, 1896, when Aguinaldo, the first Philippine president, proclaimed the country’s independence from Spain. It vanished when America took control of the country at the beginning of the 20th century, and was discovered at Aguinaldo’s death bed in 1964 by his daughter Cristina, Suntay’s grandmother.

The flag has been preserved in a dimly lit, temperature-controlled room at the General Emilio Aguinaldo Museum in Baguio’s Happy Glen Loop.

In 2016, Suntay predicted that the flag’s rate of deterioration meant it would remain good only for this generation. At the time, portions of the banner’s fabric were frayed.

But as of Thursday, the separating threads left visible gaps along a 12-inch span of the relic’s blue and red fields.

“The gaps used to be visible in only one section [of the flag]. But we have been studying photographs of my great-grandfather in the 1950s and 1960s, and the flag then was supported by wire lattices (or wire mesh), which meant it was already fragile back then,” Suntay said.

He has reached out to scholars and to professional photographers to help document the flag’s condition inch by inch and to continue studying the relic for posterity. In 1998, the Aguinaldo-Suntay family commissioned a replica of the original banner to approximate how it looked.

Earlier on Thursday, Suntay asked the city’s scouts to view the first flag, now 124 years old, after leading the ceremonial retirement and burning of worn-out flags ahead of this year’s National Flag Day on Saturday.

He told them the original flag was “unique” because its sun bears a face, a reflection of the Masonic influences on the country’s revolutionaries.

The flag’s equilateral triangle may also be a masonic element, Suntay said, adding that the relic’s blue field is lighter in tone compared to the hue of the modern banner.

He asserted that this flag was the most upfront about its ideals because the words “Libertad” and “Justicia” are stitched with gold silk thread on one side of the flag, while the phrase, “Fuerzas Expedicionarias del Norte de Luzón,” runs across the other side.

Having drawn up a flag, the country is the first democratic republic in Asia, he said, adding that the country had declared independence from Spain and had a Constitution enacted by a congress in Malolos, Bulacan, in the 19th century.

As the country addresses the impact of the COVID-19 pandemic, the oil price hikes and political divisions, it is Filipino civility, romanticism and diversity that the original flag represents, Suntay told the scouts.

Most young Filipinos are not aware that the country has been “a purveyor of peaceful people power in the world,” Suntay said, a reference to the bloodless 1986 People Power Revolt that ousted the late dictator Ferdinand Marcos.

Marcos’ son and namesake, Ferdinand Marcos Jr., was declared the 17th Philippine president on Wednesday by Congress following the divisive May 9 polls.

Suntay said Ukraine might have been inspired by “people power,” on which it may have patterned its 2005 “Orange Revolution.” This was the nonviolent civil unrest that was stirred up shortly after the allegedly fraudulent 2004 presidential elections.

Ukraine is currently under siege by Russian forces, and this European conflict has been blamed for the global inflation now gripping most nations.