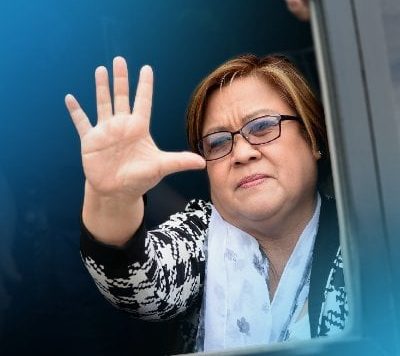 In its 32-page ruling, the court found no basis in proceeding with the indirect contempt charge by government prosecutors against the senator, who is detained at the PNP Custodial Center for drug charges.

Last year, both de Lima and Tacardon were charged with indirect contempt for statements made before the media. They said government witnesses from the Philippine Drug Enforcement Agency (PDEA) and the Anti-Money Laundering Council (AMLC) testified that they could not find any transactions linking the senator to the prison drug trade.

Based on the complaint by state prosecutors, Tacardon’s statement with the express imprimatur of de Lima is inaccurate.

The Muntinlupa Court, in dismissing the case, said the statements to the media made by Atty. Tacardon “did not constitute a ‘clear and present danger’ to the administration of justice.”

The court said Tacardon’s statement to the media is consistent with the testimony of the witnesses.

“The supposed admissions reported by respondent Atty. Tacardon to the media were not fabricated, edited, slanted, or couched in such a manner that it may influence the judge,” said the court adding that what de Lima’s lawyer did was plain reporting of what happened inside the court.

The court said if Tacardon cannot be held liable for indirect contempt, so is Sen. de Lima who supposedly authorized the release of such statements.