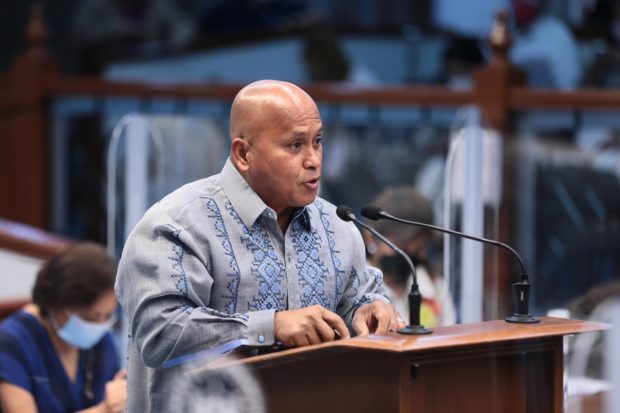 Sen. Ronald “Bato” Dela Rosa, chairperson of Senate public order and dangerous drugs committee, thanks his colleagues for supporting the passage of Senate Bill No. 2501 or an Act Penalizing Wilful and Indiscriminate Discharge of Firearms which seeks to amend the Revised Penal Code. Senate PRIB

MANILA, Philippines — The Senate on Thursday approved on third and final reading a bill seeking to penalize the “wilful and indiscriminate discharge of firearms.”

Voting 21-0-0, senators passed Senate Bill No. 2501 or “Act Penalizing Wilful and Indiscriminate Discharge of Firearms” which seeks to amend the Revised Penal Code.

“Despite the various provisions under the Revised Penal Code penalizing illegal discharge of firearms, offenders are not deterred in the commission of the crime. As such, there is a need to introduce a more severe punishment to thwart the occurrence of these incidents,” Senator Ronald “Bato” dela Rosa, sponsor of the bill, said after the measure’s passage.

Under the bill, “any person who shall willfully and indiscriminately discharge any firearms or other device that may not have been designed as firearms but can be functionally used as a firearm shall suffer the penalty of arresto mayor in its maximum period unless the facts of the case can be held to constitute any other offenses of which a higher penalty is prescribed.”

The measure imposes a penalty to offenders who are members of the military, military auxiliary agencies, or law enforcement agencies authorized to bear arms who may be charged administratively.

It also calls for the immediate cancellation and revocation of any license or permit granted to the offender and perpetual disqualification of the offender from being granted such.

“As a former police officer and a responsible gun enthusiast and advocate, the matter of gun ownership and control is very important to me. It is my fervent hope that this proposed measure will be a significant help in order to dissuade the arbitrary, reckless and indiscriminate use of firearms, and promote responsible gun ownership,” Dela Rosa, a former top cop, said.

Dela Rosa cited the case monitoring conducted by the Investigation and Detective Management of the Philippine National Police (PNP), which recorded a total of 195 cases of indiscriminate firing in the country from 2016 to 2021.

Calabarzon topped the list with 30 incidents while the National Capital Region reported 23 incidents, according to PNP data.

“I am grateful to everyone in this august body who have seen the significance of this measure –  a measure that protects and gives importance to the lives of every Filipino,” Dela Rosa went on.

The approved bill was a consolidation of similar bills filed by Senators Sherwin Gatchalian and Ramong “Bong” Revilla Jr.

A counterpart measure was approved on final reading in the House of Representatives in March 2020.