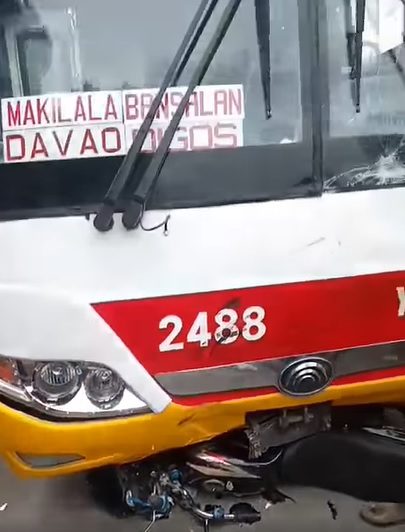 CRASH. A motorbike, driven by a 72-year-old man with his 70-year-old wife back riding, was pinned under a Yellow Bus in Buluan, Maguindanao. (PNP photo)

COTABATO CITY––A motorbike crashed Wednesday into a bus at the national highway in Buluan, Maguindanao, killing the septuagenarian couple it was carrying.

Guiamaludin Kalugay, 72, who was driving the motorbike, was killed on the spot, while his wife, Zalika, 70, was declared dead on arrival at the Buluan District Hospital.

The victims from Barangay Tual, Paglat town in Maguindanao were headed for Buluan at past noon.

“It appears that the (bus) driver did not notice the motorcycle,” Ansare Ali, a tricycle driver who witnessed the accident, said.

“That is why the motorcycle and the driver were dragged by the bus,” he said, adding that the wife was thrown off the motorbike upon impact.

The man was dragged a few meters and died on the spot.

Initial investigation showed that the victims were heading to a money transfer outlet to claim the money sent by a daughter working in the Middle East.

The police quickly responded to the scene and prevented a mob that targeted the bus driver, who was very apologetic at the unexpected turn of events.

The bus with body number 2488 belonged to the Yellow Bus Line, and was plying the Davao-Makilala-Tacurong via the Buluan route.