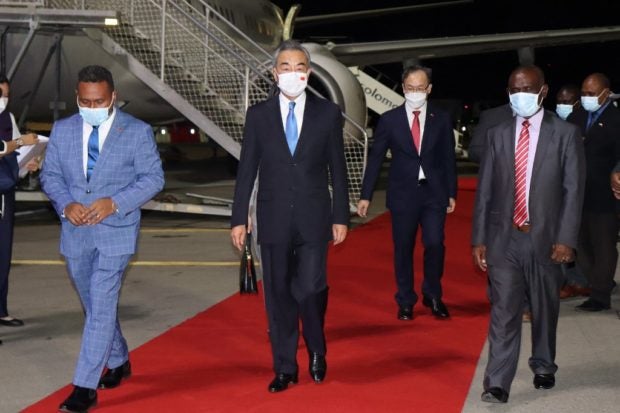 HONIARA, Solomon Islands — China has put forward plans to dramatically expand security and economic cooperation with South Pacific nations, with one regional leader calling it a thinly veiled effort to lock them into “Beijing’s orbit” and Washington warning against “shadowy” deals.

The wide-ranging draft agreement and a five-year plan, both obtained by AFP Wednesday, will be the subject of discussion when Chinese Foreign Minister Wang Yi visits Pacific nations from Thursday.

It would offer 10 small island-states millions of dollars in Chinese assistance, the prospect of a China-Pacific Islands free trade agreement and access to China’s lucrative market of 1.4 billion people.

The “comprehensive development vision” is believed to be up for approval when Wang meets regional foreign ministers on May 30 in Fiji.

The South Pacific is increasingly a theatre for competition between China and the United States — which has been the primary power in the region for the last century.

Beijing has sought to develop a greater military, political and economic foothold, but until now has made only limited and uneven progress.

The plan, if agreed, would represent a step change, facilitating everything from the deployment of Chinese police to visits by Chinese “art troupes.”

Flights between China and the Pacific Islands would increase. Beijing would appoint a regional envoy, supply training for young Pacific diplomats and provide 2,500 government “scholarships”.

But it is already raising alarm bells in regional capitals.

‘Control of our region’

In a stark letter to fellow Pacific leaders, Federated States of Micronesia President David Panuelo warned the agreement seems “attractive” at first glance, but would allow China to “acquire access and control of our region”.

It was, he said, “demonstrative of China’s intention to shift Pacific allegiances in their direction”.

“The result,” he said, would be “the fracturing of regional peace, security and stability.”

Micronesia has a compact of free association with the United States, making it one of the region’s closest US allies.

But other Pacific leaders may see the Chinese proposal as possibly lucrative or beneficial.

US State Department spokesman Ned Price warned the countries in question to be wary of “shadowy” agreements with China.

“We are concerned that these reported agreements may be negotiated in a rushed, non-transparent process,” Price told reporters Wednesday, adding that Pacific nations would make their own sovereign choices.

The Chinese plan is also certain to cause consternation in Canberra and Wellington, where policymakers are still reeling from revelations that the Solomon Islands secretly negotiated a security agreement with Beijing.

A leaked draft of the agreement contained a provision allowing Chinese naval deployments to the island nation, which lies less than 2,000 kilometers (1,200 miles) from Australia.

It also prohibited the Solomon Islands from speaking publicly about the deal’s contents without China’s permission.

News of the Solomons deal — which the United States and its allies fear could lead to a Chinese military presence in the region — sparked a frantic round of telephone and shuttle diplomacy to limit implementation.

For Washington and its allies, the presence of Chinese forces in the South Pacific would spell an end to decades of efforts to contain China inside the “first island chain”.

It could also require a dramatic repositioning of US forces.

In a sign of how seriously the South Pacific is now being treated, Australia’s Foreign Minister Penny Wong will visit Fiji on Thursday, her first solo foreign visit since taking office just days ago.

New Zealand’s foreign minister on Wednesday held talks with her Solomon Islands counterpart, winning assurances “that the agreement will not lead to a Chinese military base”.

But there is still widespread unease.

US Assistant Secretary of State for East Asian and Pacific Affairs Daniel Kritenbrink recently slammed the “complete lack of transparency” around the China-Solomon Islands agreement.

For Beijing, a base or even port access would challenge US hegemony in the region and ease what it sees as encirclement by the West.

Wang is expected to arrive in Solomon Island’s capital Honiara on Thursday, kicking off a lengthy, eight-nation regional tour.

Travelling until June 4, Wang will also stop in Papua New Guinea, Fiji, Kiribati and Samoa, as well as hold video calls with Micronesia and the Cook Islands — a self-governing part of New Zealand.

In Honiara, the trip has already stirred local controversy.

Solomon Islands journalists are threatening to boycott coverage after a “joint press conference” planned for Thursday evening was to feature only questions from state media.