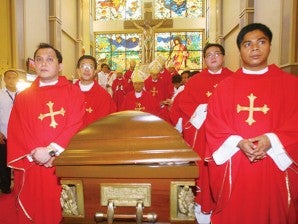 As Jose Cardinal Sanchez was laid to rest in a tomb especially prepared for him in Quezon City on Monday, his relatives hoped that the “big bang” that would accompany his passing was not one caused by an erupting volcano but the realization of his last crusade against the reproductive health (RH) bill.

Three days following his death on Friday, Sanchez, 91, was seen to his final resting place in a crypt at the Cathedral-Shrine of the Good Shepherd by family, relatives, friends and some 100 members of the clergy—30 Filipino bishops and roughly 70 priests.

The funeral Mass was presided over by retired Cebu Archbishop Ricardo Cardinal Vidal, one of the two surviving Filipino cardinals.

In a speech at the funeral, the cardinal’s nephew, Manolo Sanchez, told the hundreds of guests that the momentous events in the prelate’s life had always been marked with a “big bang.”

Manolo recalled that his uncle, a native of Pandan, Catanduanes, was ordained a bishop in Legazpi City in 1968, simultaneous with Mt. Mayon’s destructive eruption. He was elevated to the College of Cardinals in 1991 at the same time that Mt. Pinatubo erupted.

Sanchez was the fifth Filipino to be elevated to the Vatican’s College of Cardinals, whose vital functions include advising the Pope on Church matters and electing a successor following the death of a Pope.

“At his bedside, I told him there might be another big bang when he leaves us although I said, ‘I hope not’ and he just smiled,” recounted Manolo.  The cardinal succumbed to multiple organ failure after a weeklong confinement at Cardinal Santos Memorial Medical Center in San Juan.

‘In love with God’

He was to turn 92 on Saturday.

“I heard the homily of his Eminence Cardinal Vidal, that his (Sanchez) last crusade was to fight the RH bill and I just hope that the ‘big bang’ will be the realization of his last crusade,” Manolo said.

In his homily, Vidal described Sanchez as a man “with profound faith” and “truly in love with God and his Church.”

Vidal stressed how Sanchez, even at an advanced age, chose to leave the Vatican, his home for 25 years, and return to the Philippines to help Filipino bishops fight the controversial family planning measure, which espouses the distribution of free condoms and other artificial contraceptives to Filipino couples.

“When he came home two years ago at age 90, not a few raised their eyebrows when he said he wanted to go home to lead the fight against the RH bill,” said Vidal.

“Certainly, there isn’t much a 91-year-old can prove; 91 is no longer a productive age [but] if all we ever think about fighting is the open field of battle, we may have missed the more important battlefield of the human conscience,” said Vidal.

He stressed that old people may easily be dismissed by the young as obsolete “but it is often the elderly that can speak effectively on the conscience of the people.” The deceased cardinal knew just that, he said.

Sanchez may not have completed his mission to fight the RH bill, which is still undergoing plenary debates in Congress, but the bishops vowed to continue his advocacy for family and life.

“The bishops will try to concretize the advocacy of his Eminence,” said Pampanga Archbishop Paciano Aniceto, former chair of the Catholic Bishops’ Episcopal Commission on Family and Life.

Following the funeral Mass, Sanchez’s casket was brought to his final resting place—a simple black granite tomb—in a horse-drawn carriage adorned with  white flowers. Braving the heavy drizzle, loved ones joined the short procession to the crypt just behind the cathedral.

Friends rendered tearful songs, including the cardinal’s favorite, “I Believe,” a hit song in the 1950s, as his tomb was being sealed. Marking his tomb is a golden frame of his coat of arms that reads:  “Teach me to do thy will.”﻿