Carpenter’s son from Batangas is PMA’s No. 1 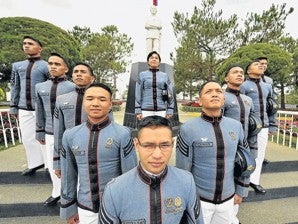 FORT DEL PILAR, Baguio City—A carpenter’s son from Batangas province is leading this year’s graduates of the Philippine Military Academy (PMA), a class that academy officials say will never stage a coup against any leader of the country.

Cadet First Class Tom Puertollano, 21, of Lipa City, ranked first among the 187 members of the PMA “Bagwis” Class of 2012 and will be joining the Philippine Army. He will receive the Presidential Saber from President BenignoAquino III on March 18.

When asked what he planned to say to the President on Sunday’s graduation ceremony, Puertollano said he would assure him the loyalty of his class.

During the presentation of the top graduates on Monday, Major General Nonato Alfredo Peralta, PMA superintendent, said the Bagwis class members had undergone the toughest ethics reform programs to be imposed by the academy in recent years.

“This class will never stage a coup d’etat,” Peralta said in Filipino. “They know what is right.”

He said that cadets had also been trained to be diplomatic and “can hold their own in conversations with anyone, even the New People’s Army.”

He said the class was mentored at a period when the Senate conducted inquiries into alleged military corruption. Academy officials, he said, also held a dialogue with the class when reports focused on new coup rumors targeting Mr. Aquino.

The only woman in the Top 10 is Cadet First Class Angeline Esmeria of Taguig City, who placed fourth and who described her achievement as surviving cadet life as a plus-sized woman. The class has 19 women members.

Cadet First Class Mark Anthony Tito is the class baron, entitling him to the Armed Forces of the Philippines Chief of Staff Saber.

Mr. Aquino will commission 91 male cadets, 11 female cadets and a cadet who graduated from the Australian Defense Force Academy as second lieutenants of the Philippine Army.

Puertollano said he was dedicating his achievements to his late mother, Barbara, an eatery helper, who died of pancreatitis in August last year.

“She will witness [my graduation on Sunday] even if she is not here physically,” Puertollano said. Mario, his father, works as a carpenter in Tambo village in Lipa City.

“[My parents] were the ones who did everything [they could to make sure I end up] where I am now,” he said.

When the Philippine Daily Inquirer contacted his father, Mario, at the family’s unfinished house at Phase 5, St. Joseph Subdivision, Tambo village, Lipa City, he said he had expected his son to become class valedictorian but was still not convinced he topped the class.

The 53-year-old carpenter said he wanted to be surprised when he and his children attend the graduation rites.

Puertollano completed his elementary and high school  education at Fernando Air Base in Lipa.

The third in a family of four, Puertollano said he wanted to be a cadet so much to help his parents. But he was disqualified the first time he took the PMA entrance examination because he was under age.

He pursued electrical engineering at Batangas State University, making it to the dean’s list, before he decided to apply as cadet in the PMA for the second time.

Puertollano wears correctional glasses, but he is a certified sharpshooter and an expert in handling an M-16 rifle.

He initially aspired to join the Air Force, but he changed his mind after undergoing field immersion exercises during the course of his cadet training program.

“I prefer a direct engagement with the people,” he said.

Puertollano will become the first recipient of the Spanish Armed Forces Award for being the best in humanities. Together with Cabrera and Caiman, he will go to the United States for additional studies after graduation.

Esmeria introduced herself at Monday’s news conference as a cadet who survived the ups and downs of cadet life despite her heavy build.

Her teachers said she entered the academy weighing 176 pounds but will leave it weighing 145.5, losing weight due to the physical nature of academy life.

The third child in a brood of eight, Esmeria said she was the only plump child in the family. After pursuing two years in electrical engineering at Technological University of the Philippines, she passed the PMA examination.

Her self-esteem woes added to the various challenges faced by female cadets, Esmeria said, but exercises and constant physical activities kept her focused and determined.

She said having Cadet First Class Zeporah Gabino Dalang of Tinoc, Ifugao province, as her bunk mate helped her work on her weight. Dalang is Bagwis’ “Class Tarzan,” the recipient of the Athletic Saber.

Esmeria said her favorite food is chicken, a staple of the academy’s daily meat and vegetable meals.

She also won PMA acclaim for playing a woodland princess in last year’s “100 Nites Show,” an annual variety show in the academy, where she was forced to wear a gown.

“I could not stand beside three other cadets who played the other princesses because they were sexy so I had to find a new role for myself,” she said. Esmeria wowed the crowd as the comic foil.

Bagwis is Filipino for wings, but Puertollano said the class name stood for “Bagong Kawal na may Iisang Lakas.”

He said the class members wanted to call themselves the new soldiers, and their aspiration guided their performances from the time they were plebes, or fourth class cadets.

Peralta said the cadets’ teachers have been upfront with the class about the academy’s goal to dissociate PMA from issues of hazing and maltreatment and from coup d’etat and military adventurism.

“They were here when PMA was reshaping their culture. We wanted to show them there are other ways of showing loyalty and sharpening brotherhood bonds. Maltreatment was mistakenly used to cement friendships,” he said.

Peralta said Bagwis Class members were subjected to and became responsible for a reformed Honor Code system and a stricter cadet conduct policy board, which are administered by the corps of cadets.

“We made sure the cadets disciplined themselves,” he said. With a report from Marrah Erika Lesaba, Inquirer Southern Luzon