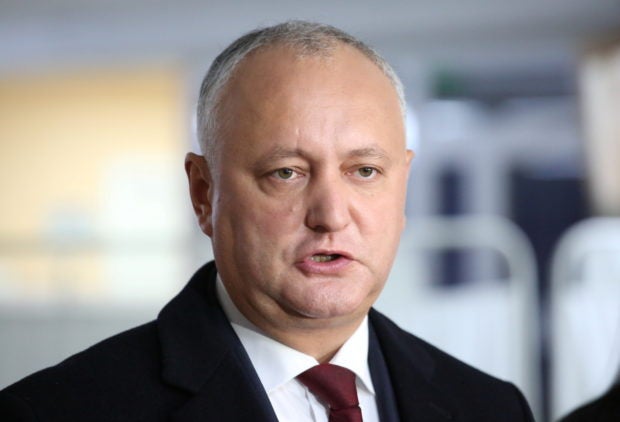 FILE PHOTO: Igor Dodon, Moldova’s President and presidential candidate, speaks to the media at a polling station during the second round of a presidential election in Chisinau, Moldova November 15, 2020. REUTERS/Vladislav Culiomza

KYIV — The head of Moldova’s pro-Russian opposition party, former President Igor Dodon, said on Tuesday he had been detained by Moldovan authorities on corruption charges, a move which is likely to anger the Kremlin.

Dodon declared his innocence and blamed pro-Western President Maia Sandu, who he said wanted to distract people from the country’s economic woes.

The searches were related to an investigation into corruption and treason among other charges, Russia’s Interfax and RIA news agencies quoted prosecutors as saying.

“Dear citizens, I want to assure you that for every element of interest to the prosecutors I have the necessary explanations that remove any suspicion of corruption or breaking the law,” Dodon said in an online message. “This politically-motivated case is fabricated.”

Dodon’s arrest comes at a time when relations between Moscow and Chisinau are increasingly strained.

Fears have increased that Moldova could be drawn into the conflict in neighboring Ukraine, after pro-Russian separatists in Moldova’s Transdniestria region blamed Kyiv for what they said were shootings, explosions and drone incursions.

The Kremlin earlier said it was concerned at reports that Dodon had been detained, with spokesman Dmitry Peskov calling on Moldovan authorities to respect his rights.

Dodon confirmed that he had been “interrogated and detained,” accusing Sandu – who succeeded him in 2020 – of being “completely unable to manage the economic and social situation in the country”.

A representative of Sandu, who is currently in the United States to celebrate her 50th birthday, did not respond to a request for comment.