newsinfo / Headlines
Headlines
THOSE WITH SYMPTOMS WILL BE ISOLATED

No ban yet on travelers from countries with monkeypox 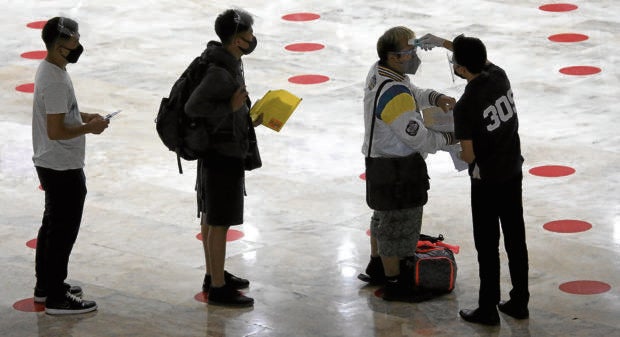 MANILA, Philippines — The government is not yet inclined to impose a ban on travelers from countries with confirmed monkeypox cases.

“We should not impose a travel ban yet. With regards to isolation and quarantine protocols, [it] is done for suspected cases…. We just monitor [any]one suspected to be exposed [to monkeypox] and then we isolate if there are symptoms,” Dr. Marissa Alejandria of the Department of Health’s (DOH) Technical Advisory Group on infectious diseases said in a press briefing on Tuesday.

She described monkeypox as a viral disease characterized by chickenpox-like rashes or lesions on an infected person.

Alejandria said the disease is zoonotic — that is, transmissible from animals to humans — with the virus entering through the respiratory tract, eyes, mouth or open wounds.

According to her, the incubation period of monkeypox is 5 to 21 days, followed by about four days of fever, then the appearance of rashes on the face, palms and soles which can take up to four weeks.

Director Alethea de Guzman of the Epidemiology Bureau of the DOH said the department is coordinating with the Bureau of Quarantine (BOQ), the Bureau of Immigration and port authorities on the surveillance and testing of incoming travelers.

Should cases of monkeypox be detected in the country, the Research Institute for Tropical Medicine would be designated as the main isolation facility, she said.

Director Beverly Ho of the Disease Prevention and Control Bureau said a “four-door strategy” would be implemented, including strict border controls as a “primary level of defense” and screening, testing and quarantine of travelers with monkeypox-like symptoms.

As part of this strategy, international travelers would be required to register through the BOQ’s onehealthpass.com.ph, 48 hours before departure from the country of origin.

Of those countries in Africa, only Benin and South Sudan had imported cases, and the rest had locally acquired or endemic cases.

Health officials and infectious diseases experts expressed confidence that the country’s health system is ready to contain the virus.

They said a vaccination drive was not yet needed.

A meeting among medical front-liners to prepare the health-care response to the viral disease is set this week.

The local governments are expected to conduct immediate case investigations and contact tracing once a monkeypox case is detected at the local level.

“We urge the public to remain vigilant with the outbreak of monkeypox. If you are immunocompromised or living with an immunocompromised individual, be extra careful if you have symptoms. Get lesions tested and immediately isolate yourself,” Ho said.

DOH heightens monitoring of monkeypox to keep it out