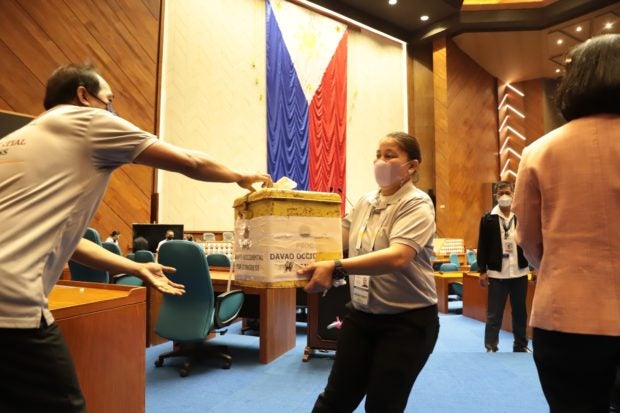 COCS REACH HOUSE OF REPRESENTATIVES | Senate Security officers have safely delivered all ballot boxes containing Certificates of Canvass (COCs) and Election Returns to the House of Representatives (HOR) before dawn Monday, May 23, 2022. Senators and Representatives are set to convene in a joint session on May 24 to canvass the votes for presidential and vice presidential candidates in the May 9 elections. For the past two weeks, the Senate has received 90.17 percent or 156 of the total 173 COCs. (Senate PRIB)

MANILA, Philippines — The country’s new president and vice president will be proclaimed by Thursday, at the latest, as Congress starts its “nonstop” canvassing of votes on Tuesday afternoon at the House of Representatives complex in Quezon City.

Despite petitions urging the Supreme Court to block the proceeding, lawmakers took a bipartisan stance that they were within their rights to proceed with the canvassing and declaring the winners even if the high tribunal were to decide belatedly in favor of the petitioners, who had challenged the eligibility of presumptive President Ferdinand Marcos Jr. and had sought to stop his proclamation.

The Philippine National Police on Monday also warned that they would arrest protesters planning to stage rallies without permits at the start of the canvassing of votes for the two highest elective posts.

The Senate and the House will hold a joint public session on Tuesday to convene as the National Board of Canvassers and approve the procedures for the canvassing of votes.

“Once we open the session at 10 a.m. and resume at 2 p.m. for the canvassing proper, it will be nonstop. It means our canvassing is without breaks or suspension of the session. That is what both chambers agreed on the other day,” House secretary-general Mark Llandro Mendoza said on Monday.

“Our initial target was by Friday. But with this nonstop canvassing, hopefully the latest will be Thursday morning for the proclamation. But if there are no issues raised, we might be done by Wednesday night,” Mendoza said.

He noted that the process would really be much faster now since the votes were electronically transmitted.

“Don’t worry because the process is very transparent. The media is there and it will be livestreamed, so the whole process will be for everyone to see,” Mendoza added.

By 2 p.m. on Tuesday, the canvassing of votes will begin with Senate President Vicente Sotto III and Speaker Lord Allan Velasco serving as presiding officers during the joint session.

The Senate President will open, in the order they were received, all certificates of canvass (COCs) electronically transmitted to the consolidation and canvassing system and all manually counted and physically delivered COCs.

The joint canvassing committee will decide on all questions and issues raised involving the COCs by a majority of vote of its members.

If the two panels disagree, the decision of the chair will prevail. Deadlocks will be resolved by the Senate President and House Speaker.

Once the canvassing is completed, the joint committee report will be approved and signed by a majority of the committee members.

The report will then be submitted to the joint public session for consideration and approval, after which the Speaker and the Senate President will proclaim the President-elect and the Vice President-elect.

The 18th Congress will adjourn its third and last regular session on June 4. All newly elected lawmakers will assume office on June 30, but the incoming 19th Congress will formally open session on July 25, coinciding with the new President’s first State of the Nation Address.

Meanwhile, Police Maj. Gen. Valeriano de Leon, PNP director for operations, said rally organizers should secure permits from local governments concerned and ensure that they could control their own ranks to prevent violence.