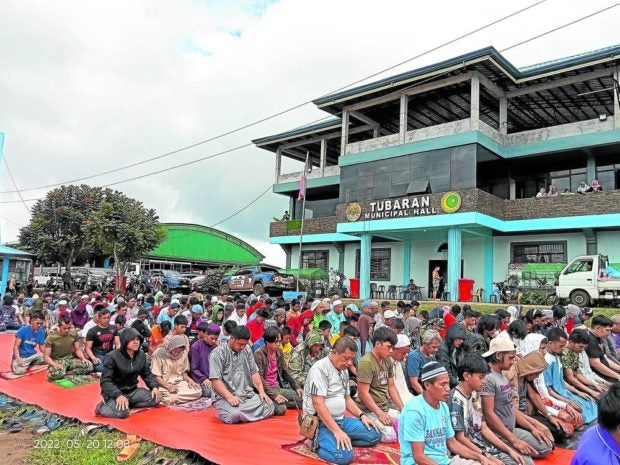 PRAYER FOR PEACE | Residents of Tubaran, Lanao del Sur, hold a prayer rally in front of the municipal hall on Friday for a peaceful and honest special election on May 24, when 6,000 voters in 12 barangays will cast their ballots. (Photo by DIVINA M. SUSON / Inquirer Mindanao)

TUBARAN, LANAO DEL SUR — At least 6,000 residents were expected to cast their ballots during the special election set in this town today, Tuesday, with policemen manning the polling precincts and Army soldiers guarding the voting centers in 12 villages.

Brig. Gen. Jose Maria Cuerpo II, commander of the Army’s 103rd Infantry Brigade, said troops from the 51st Infantry Battalion were sent to the town not to harass or intimidate supporters of any politician but to help the Philippine National Police ensure an election that “will be peaceful, credible and successful.”

Trained police personnel will serve as board of election inspectors in the voting centers of 12 barangays where over 6,000 registered voters were yet to cast their votes in the May 9 elections when the Commission on Elections (Comelec) declared a failure of elections.

Of the town’s 21 barangays, voters in only nine barangays were able to cast their ballots before voting was halted by the Comelec after supporters of reelectionist Mayor Yassin Papandayan formed a human barricade outside the Comelec office here to prevent the transport of election paraphernalia to protest the sudden reclustering of polling precincts from the original three to four voting centers.

Cuerpo said they needed to add security forces in the town even if Papandayan’s supporters were not violent and no commotion had happened since the May 9 human barricade to ensure that the special polls could proceed without a hitch.

Former Lanao del Sur Rep. Mauyag Papandayan Jr., currently the municipal administrator of Tubaran and father of Yassin, however, said they were puzzled why “so many soldiers” were sent to their town “when we are not making trouble.”

“All we want is a fair and orderly election,” the older Papandayan said, pointing out that they only protested because the reclustering was not approved by the Comelec en banc. Also, he said, the polling precincts were located in areas occupied by another family at feud with the Papandayans.