Planning a rally during Congress canvassing? Do it in the proper place, says PNP | Inquirer News
Close
menu
search

Planning a rally during Congress canvassing? Do it in the proper place, says PNP 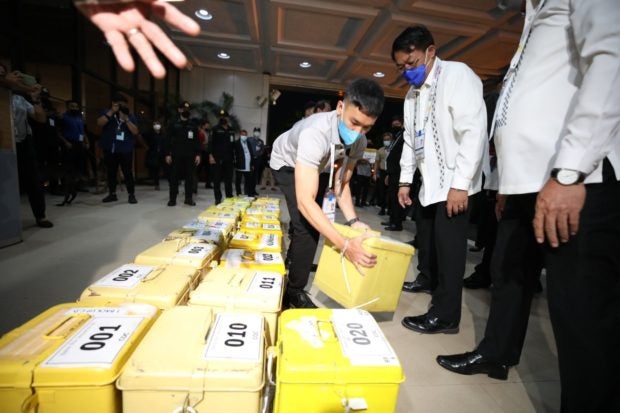 HOUSE BOUND: Military trucks bound for the House of Representatives in Quezon City depart the Senate of the Philippines in Pasay City early Monday morning (May 23, 2022) to transport the ballot boxes containing the Certificates of Canvass (COCs) and Election Returns (ERs) for the presidential and vice presidential elections. Senators and Representatives are set to convene as the National Board of Canvassers (NBOC) which will canvass and proclaim the winning candidates for President and Vice President in the May 9, 2022 elections. (Senate PRIB)

MANILA, Philippines — People planning to stage programs and rallies while Congress is canvassing votes for president and vice president should do it in the proper forum or venue, the Philippine National Police (PNP) officer-in-charge said on Monday.

In a press briefing, Lt. Gen. Vicente Danao Jr. said that while his constant reminder to police officers is to exercise maximum tolerance, he is also appealing to possible rally attendees to be calm and refrain from forcing programs into restricted areas.

“Well ang lagi ko namang sinasabi po ay let us always exercise maximum tolerance no, especially in dealing with those rallies.  Alam niyo everyone has his own right to express their own grievances, karapatan po nating lahat ‘yan, pero nakikiusap ako, let us do it in the proper forum,” Danao said.

(Well, what I have always said is for officers to always exercise maximum tolerance, especially in dealing with those rallies.  We know that everyone has his or her own right to express their own grievances, that’s a right of everyone, but I am pleading to people to please do it in the proper forum.)

“Kung ‘yong area naman ay bawal lalong-lalo na ‘yong canvassing area, eh talagang bubuwagin po kayo d’yan.  Okay? So I am asking for prudence and sobriety (from) all those rallyists to please calm down,” he added.

(If the area, especially the canvassing area is really restricted, then the police have no choice but to disperse the event.  Okay?  So I am asking for prudence and sobriety from all those rally attendees to please calm down.)

The Congressional canvassing of votes for president and vice president in the 2022 polls, which will be held at the Batansang Pambansa Complex in Quezon City, is expected to start on Tuesday.

In terms of security at the area, Danao assured that police units have been deployed already even before the elections.

(Before the elections started, we really had placed units there on standby, near the Congress, especially that the final canvassing and proclamation would take place there.)

“So we have at least one company there to secure the whole area, ‘yan lang ang babantayan nila, ‘yong Congress para ma-ensure that the process of canvassing and the final proclamation of our president and vice president would not be hampered by anyone.  So ito po ay para i-prevent ‘yong nagra-rally kung meron man, na hindi po guluhin ‘yong area,” he added.

(So we have at least one company there to secure the whole area, they are assigned just to monitor the Congress to ensure that the process of canvassing and the final proclamation of our president and vice president would not be hampered by anyone.  This is really to prevent any demonstrations, if there are such attempts to sow chaos in the area.)

While no official movements have been made public by various opposition factions, there were groups that have staged protests already after the Commission on Elections (Comelec) partial and unofficial tally showed former senator Bongbong Marcos and Davao City Mayor Sara Duterte-Carpio — running mates in the last polls — leading the presidential and vice presidential race.

Despite the protests and the alleged irregularities, Comelec has maintained that the recently-concluded polls were accurate.

Danao further said that the Filipino people have already voiced their choices for president and vice president, thus, they should be given the chance to fulfill their mandate.

(As I have said, the Filipino people, majority of the Filipino people have finally spoken, so let the mandate of those who won prove their worth.  Let us give them the chance to prove that they are the rightful leaders of the country.)

By the numbers: More voters in 2022 than in previous polls