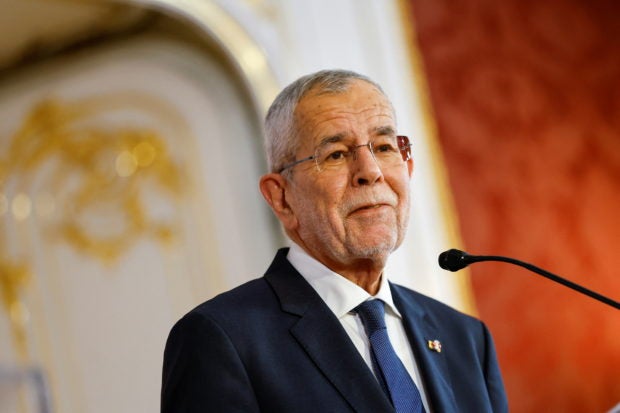 VIENNA — Austrian President Alexander Van der Bellen, a 78-year-old former leader of the Greens, announced on Sunday he is standing for reelection this year to a second six-year term, which is likely to limit the number of candidates.

Van der Bellen is a popular figure who has been a steady hand in periods of turbulence including the scandal-tainted collapse of a ruling coalition between the conservative People’s Party (OVP) and the far-right Freedom Party in 2019.

Senior members of the two biggest parties in parliament, the OVP and the Social Democrats, have said it is likely they will not field candidates if he stands. Austrian presidents have a largely ceremonial role but they oversee periods of crisis and transition and have the power to dismiss the government.

“My name is Alexander Van der Bellen. I am running for the office of president. I ask for your support and your vote,” he said in a post online on Sunday.

Van der Bellen won by a narrow margin, 50.3% to 49.7%, in a runoff against Freedom Party candidate Norbert Hofer in May 2016 when Europe’s migration crisis was the dominant political issue.

The Constitutional Court ordered a rerun of that runoff, however, over irregularities in the way ballots and results were handled.

The embarrassment turned to farce when the re-run had to be postponed to December from October because of faulty glue on envelopes used for postal ballots. Van der Bellen went on to win the second runoff by a wider margin, 53.8% to 46.2%.

He has brought calm and even humor to his role.

Van der Bellen appointed a caretaker government when the government collapsed in 2019 and has joked about how often he has sworn in new ministers, including two chancellors in quick succession last year after Chancellor Sebastian Kurz quit over corruption allegations that he denies.