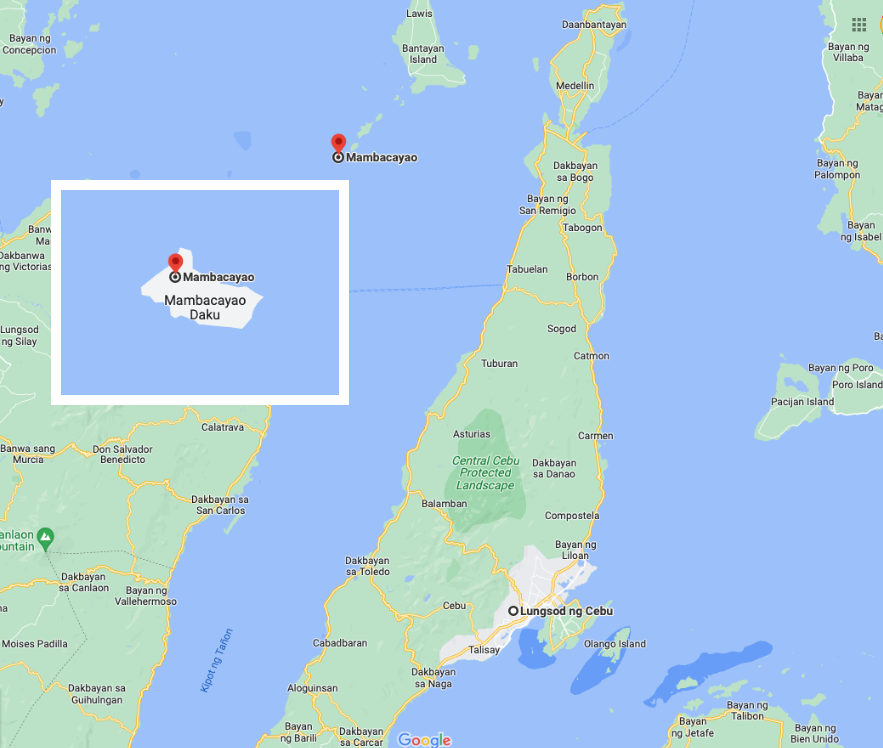 For decades, the fisherfolk of Mambacayao Island — a small islet that is part of the Bantayan Group of Islands in Northern Cebu — depended on the rich Tañon Strait for their livelihood.

John Ortega said that in the past, the small boats that he and other fishermen used would almost capsize from the weight of the 20 kilos of fish that each of them caught daily. They would sell their haul of groupers, mackerel, herring, and even manta rays and baby sharks in the local markets and some they’d whip into sumptuous dishes at home.

Now, he said they would be lucky to get two kilos from a whole day out at sea. What are now caught in their nets are mostly plastic and other garbage that are contaminating one of the largest marine protected areas in the country.

“Before, we would only see that on TV images of turtles that have straws in their noses,” Ortega said. “Now when we cut open some fish, we would find traces of plastic. [We’re] worried that we’ve been eating contaminated fish.”

Science is backing his fears. A 2021 study by the Coastal Resources and Ecotourism Research, Development and Extension Center (Crerdec) of the Ecosystems Research and Development Bureau (ERDB) have found traces of microplastics, or plastic debris, in at least 10 marine sites across the archipelago.

The study found that the highest concentration of plastic pollutants was in Tañon Strait, the 160-kilometer emerald waters separating Negros and Cebu islands and one of the most productive fishing grounds in the country.

Jon Alfonso Horvidalla, science research specialist and study leader, said the findings were “alarming” as they affect both the marine life in the strait and the communities around it.

“We’re no longer certain that what (they) are eating has not yet been contaminated by plastic,” said Jim Padin, Crerdec supervisor.

SNAPSHOTS OF AN ISLAND Mambacayao Island is just one of the many fishing communities that consider the Tanon Strait their lifeline. Ven Carbon, one of their fisherfolk leaders, estimate that there are around 400,000 fishermen who depend on the strait and the nearby Visayan Sea. Apart from fishing, some families also harvest seaweed.

Nearly all microplastics originate from plastic waste products that are dumped directly into the ocean or in inland waterways that empty into the sea.

Due to weathering, wave action, exposure to sunlight and other elements in the open sea, plastic degrades into microscopic sizes of between 20 to 5,000 microns (half a centimeter). One micron is one-millionth of a meter.

Citing multiple international studies, Horvidalla said these microplastics were found to be “retained inside body tissues of living things” and can cause damage to cell walls. It also compromises coral health and can “amplify coral exposure to other stressors.”

At present, most studies on microplastics focus on its impact on marine life. However, there is considerable literature showing that microplastics can cause inflammation, cell death and DNA damage in laboratory animals and cell cultures.

It’s also a major fishing ground for Cebuano fisherfolk, who became increasingly dependent on its bounty during the pandemic. The Philippine Statistics Authority reported last year that at least 530,000 Cebuanos sank below the poverty threshold following the drop in tourism revenue in the previous two years.

They included some of the fishermen of Mambacayao and Barili, another coastal municipality southwest of Tañon. Before the pandemic, they used to sell their catch to beach resorts, said fisherfolk leader Ven Carbon.

“When they closed down (during the pandemic), not only were we catching fewer fish, but we struggled to sell them because everyone was hard up, too,” Carbon said. Many small fishermen left for the city to work as carpenters or drivers to put food on the table, he said. 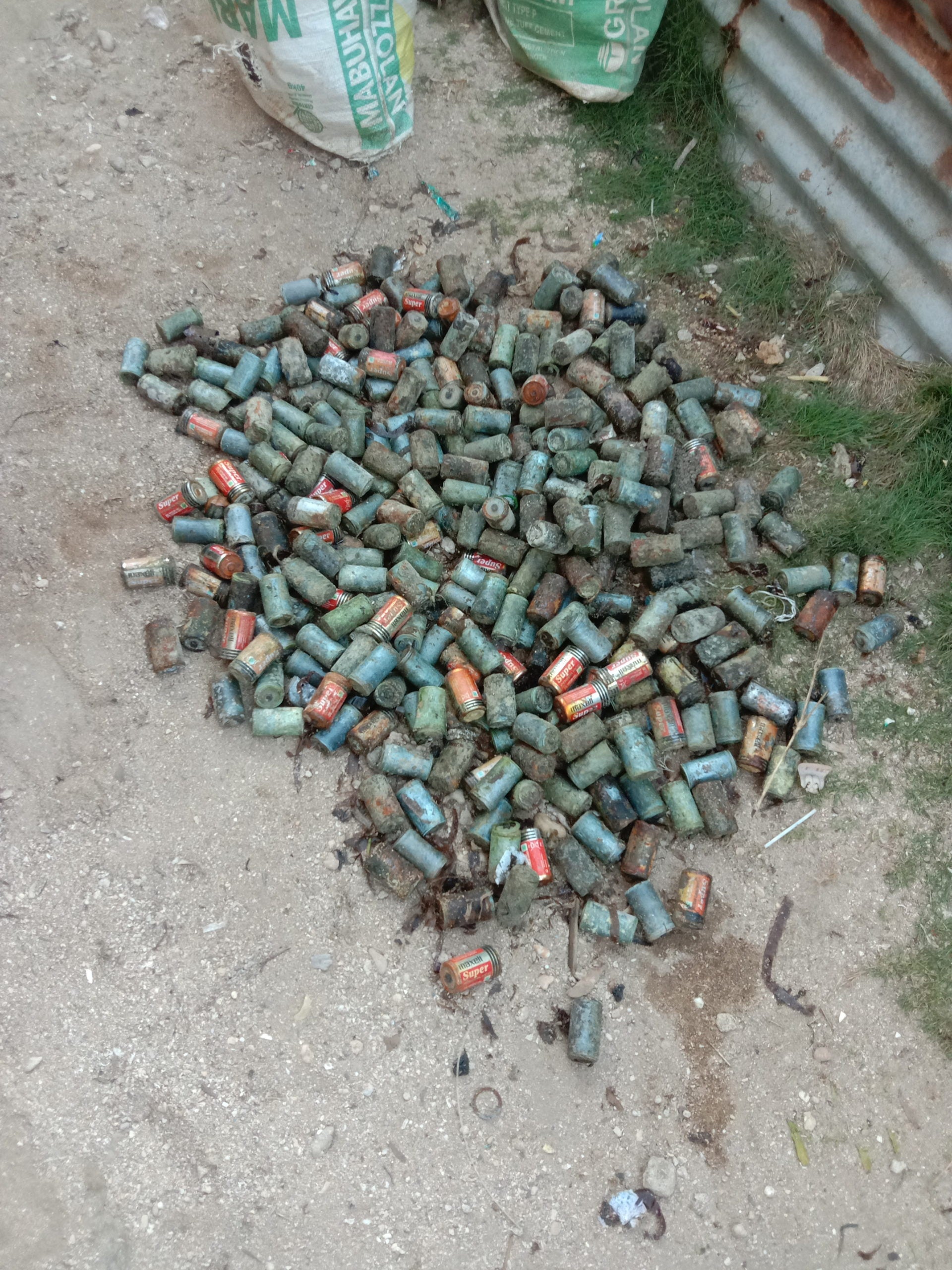 COASTAL CLEANUP Despite being a marine protected area, the Tanon Strait carries with it garbage and plastic that wash into the fishing communities. While single-use plastic is not uncommon, the most surprising were the thousands of discarded batteries that end up on their shores regularly. These are discarded by fishermen who do spear fishing at night. PHOTOS FROM JOHN ORTEGA

As in most coastal areas in the country, plastic is a huge problem for the Tañon fisherfolk, said Ortega, who leads the local Tañon Strait Fisherfolk Federation.

Plastic sachets, bottles and labo end up on the seafloor where marine animals mistake them for food, or they are washed up on the shores, which locals call “gapnod.”

“We would sometimes wake up to see garbage lined up along the shore especially when there are strong waves. It’s mostly single-use plastic, but there are also batteries (disposed by fishermen during their night fishing),” said Vince Dacomos.

During one of their regular coastal cleanups, Dacomos, 26, and his friends were able to fill an entire sack with discarded batteries in less than one hour.

In Barili, plastic ends up entangled in the roots of the mangrove forests on the shoreline.

“Because mangroves are also nurseries for fish like sardines and bolinao (whitebait fish), the plastic ends up choking them,” Carbon said.

This is not an isolated case. Most of the country’s waters are heavily polluted with plastic and other garbage, mostly because of weak enforcement of environmental and waste management laws, said Oceana vice president Gloria Estenzo Ramos.

Even so, there is still a dearth of research on the extent of plastic contamination. 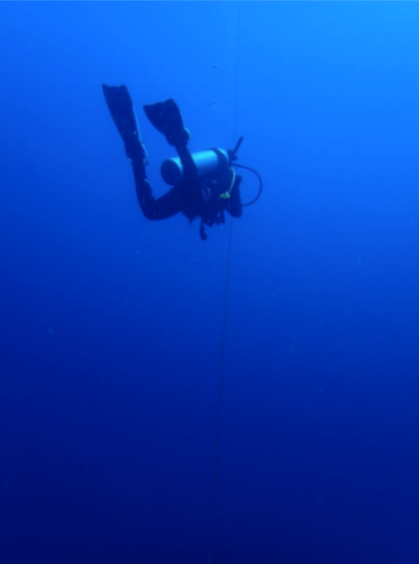 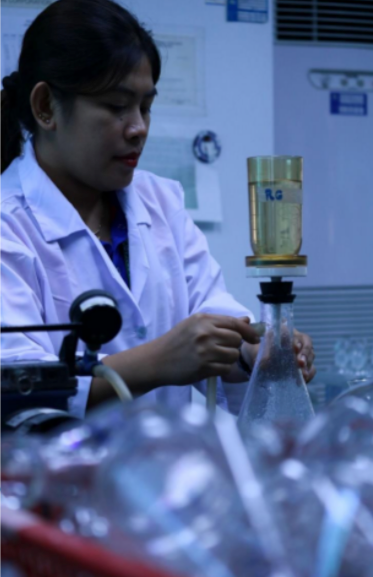 DATA GATHERING A team of researchers collect and study water samples at 10 study sites nationwide to determine the presence of microplastics. —PHOTOS FROM ERDB-CRERDEC

To measure this pollutant, the researchers collected water samples at depths of 5, 15 and 30 meters as well as along the shoreline.

The most concerning finding was that all 10 sites were already contaminated with microplastics. Despite being a marine protected area, Tañon recorded the highest amount of plastic, at least 58 pieces of microplastics per liter.

Padin believes the water currents, running from north to south, turned it into “a deposition area” for plastics and microplastics. 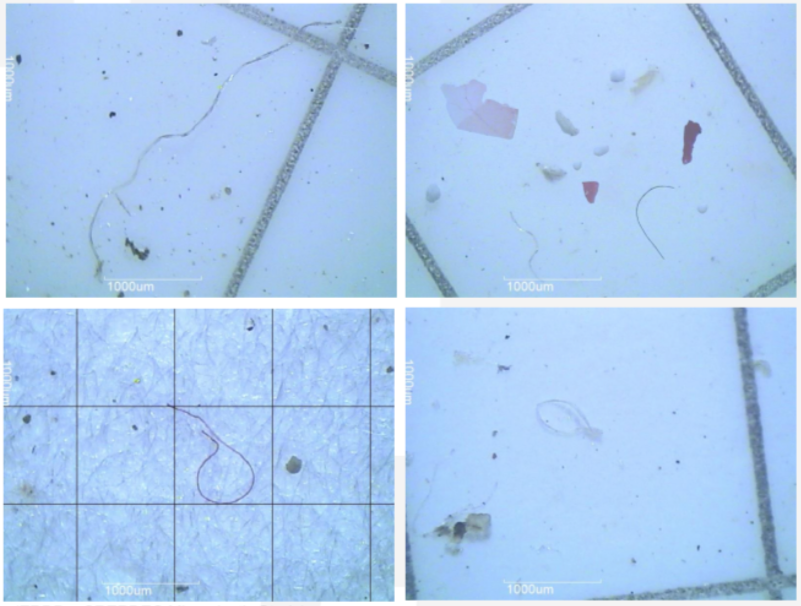 MICROPLASTICS These are the examples of microplastics collected from these study sites. The most prevalent type were microfragments (debris of plastic), followed by microfibers (degraded nets and textiles). —PHOTOS FROM ERDB-CRERDEC

Though microscopic, microplastics can wreak immense havoc on the ocean’s fragile biodiversity as they can be ingested by fish, damage coral reefs, enter the food chain and pervade water, Padin explained.

No one knows where all this plastic waste found in Tañon exactly comes from. The research team cites studies estimating that at least 80 percent of it comes from land-based sources, and only 20 percent from ocean-based sources like fisheries and vessels.

What’s clear is that “there is no significant difference [in terms of plastic pollution] between protected areas, fishing grounds and industrial grounds,” according to Horvidalla. “Even if it’s a protected area, it can still be contaminated [because] oceans have no known boundaries.”

Most of the plastic they found are microfragments from single-use plastic, like plastic utensils and sachets, Horvidalla said.

This is a huge problem for a country like the Philippines where most poor people can only afford to buy small quantities of certain necessities, which are typically retailed in packets or sachets.

Now the fisherfolk’s problems are layered because they catch more plastic than fish, and the fish they catch have plastic in them.

This is why environmentalists consider plastic pollution as a social justice issue: large corporations that continue to inundate the Global South with consumer products in low-priced, single-use plastic containers are shifting the burden of managing and disposing them on communities and governments, which are ill-equipped to do that in the first place.

Countries like the Philippines become doubly vulnerable to marine pollution and the climate crisis because more than 99 percent of all plastics are derived from fossil fuels that induce planet-warming emissions.

“There’s this notion of [wanting] to blame ordinary people [for our status as] the third worst plastic polluter in the world,” said Antoinette Taus, Oxfam Pilipinas ambassador for resilience. “We feel this is unfair [because] these are communities that are working every day to meet their basic needs.”Oceana’s Ramos said consumers should not be blamed for this because they have no alternatives. “The duty-bearer here is the government,” she said.

Both Taus and Ramos are calling for “holistic, intersectional” solutions that take into account the entire life cycle of plastic: from manufacturing, distribution and disposal.

The government has a gamut of environmental laws it only needs to implement to curb all kinds of pollution.

The law mandates the NSWMC to prepare a list of nonenvironmentally acceptable products and packaging within a year of the measure’s approval—something that the commission has not done in more than 20 years since the law was passed.

That is why communities like Mambacayao and Barili have been taking initiatives to protect and preserve Tañon Strait: encouraging their youth to participate in coastal and free-diving cleanups, incentivizing residents to exchange garbage for money and mangrove planting to preserve their shoreline.

“Tañon only has us to protect it,” Ortega said. “If it suffers, we suffer.”

(Editor’s Note: This series is written and produced with the support of Oxfam Pilipinas.)