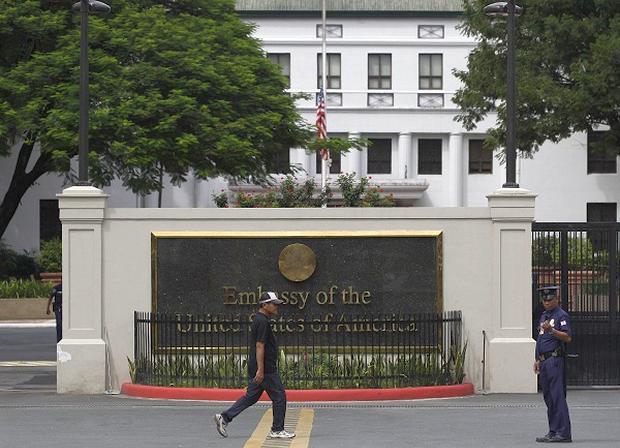 The US Embassy in Manila. (File photo from Philippine Daily Inquirer)

MANILA, Philippines — Groups assailed the violent dispersal of activists who were on their way to the US Embassy in Manila to protest the visit of US President Joe Biden to South Korea and Japan, with two, including a campus journalist, arrested by the police.

Lloyd Manango, a student of the University of the Philippines Manila (UPM) -College of Arts and Sciences, joined progressive groups who were on their way to the US Embassy along Roxas Boulevard around noon on Friday when antiriot officers of the Manila Police District (MPD) blocked their way at the corner of United Nations Avenue and Alhambra Street in Ermita district.

Manango is the national vice chair of the League of Filipino Students and a staffer of The Manila Collegian, the official campus publication of UPM.

Manango was detained at the MPD Police Station 5 in Ermita, along with Kathy Yamzon of the labor group Defend Jobs Philippines who also joined the protest. They were later released.

The MPD said the protesters were dispersed since they had no permit to rally. The groups transferred to Plaza Salamanca along Kalaw Avenue, where they staged a short program before voluntarily dispersing at around 1 p.m.