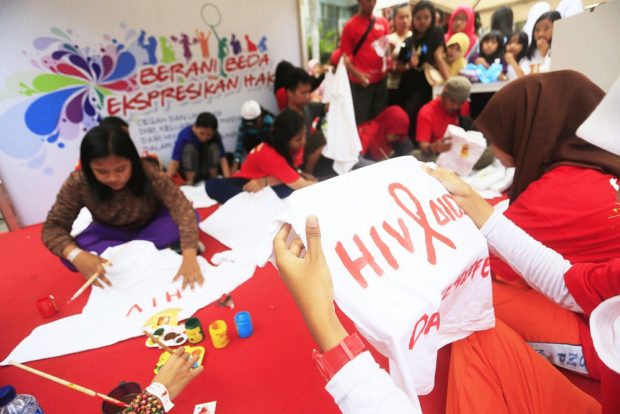 FILE PHOTO: Creative work for noble cause: Students paint slogans on T-shirts about HIV/AIDS during a program organized by the Indonesian Red Cross (PMI) in Jakarta recently. (The Jakarta Post/Dhoni Setiawan)

CAGAYAN DE ORO CITY—The human immunodeficiency virus (HIV) has remained a “silent epidemic” amid the threat of the coronavirus disease, an HIV-AIDS advocate has said.

She said they are alarmed that COVID-19 has overshadowed HIV-AIDS since a national health emergency was declared by the government in 2020.

Estoque said since coronavirus infections swept across the country, information campaigns on HIV and AIDS by health service providers and their allies in the private sector has not been prioritized.

“In the midst of the pandemic we do not stop with what we have to do because HIV is still threatening us, still claiming lives. It should not have been the case,” Estoque said.

Even with the concerted efforts to reduce the number of Covid-19 cases, she said the HIV information and education campaign must be sustained.

“No pandemic, no quarantine, no lockdown can stop the spread of HIV, especially during the pandemic that there was no education conducted, and our youth have not been reminded to keep themselves safe. Condoms were no longer being handed out for close to two years. We have monitored that,” Estoque added.

What’s also been alarming, she said, was there was an increase in the HIV infection.

“The problem is, HIV remains to be a silent epidemic,” said adding, adding that in a recent report she has read, out of 10 Filipinos who have contracted the virus, only two are aware that they are infected and had themselves tested.

According to available online data provided by aidsdatahub.org, in January 2021, there were 890 confirmed HIV-positive individuals in the country, and 96 percent or 852 of the reported cases were male.

In one of its reports on HIV-AIDS, the US National Center for Biotechnology Information said the “HIV crisis in the Philippines has worsened during the Covid-19 pandemic.”

The Center said that the country’s Department of Health has reported that the HIV testing decreased by 61 percent. It was, however, noted that the average number of people newly diagnosed with HIV per day had only decreased by about 37 percent, from 35 a day in 2019 to 22 a day by the end of 202.

“This may indicate that a substantial number of individuals was left undetected in 2020,” it said.

But in 2021, 28 new HIV infections were detected every month, said the Department of Health.

Grace Dael, focal person for PLHIV of the Department of Social Welfare and Development, said stigmatization of those infected is still a major concern today, adding, “we need to start treating the person and not just the disease.”

To do that, Dael said, “we must improve health literacy, more government engagement with key populations and community-led driven initiatives are an important part of this effort.”

A PLHIV who identifies himself as “Jackrey Ver” said support from groups and government agencies has helped him recover from various illnesses caused by the virus.

Ver, who was diagnosed in 2015, said there was a time when he only weighed 30 kilograms while undergoing medical treatment for meningitis, tuberculosis, and pneumonia.

Ver said he can bear the physical pain that went through while confined in the hospital for almost two months, but what was painful was “no one is taking care of me.”