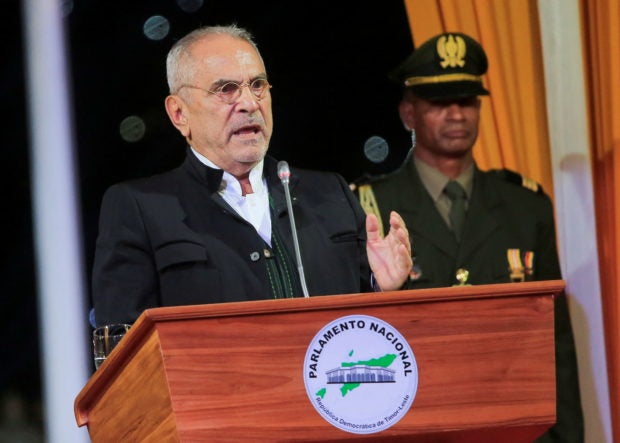 DILI — East Timorese independence figure and Nobel laureate Jose Ramos-Horta was inaugurated as the country’s fifth president on Friday, pledging to dedicate his time in office to strengthen national unity and forge closer relations with China.

Ramos-Horta, who spent decades as the exiled spokesperson for the guerrilla movement during Indonesian occupation, previously served as president from 2007 to 2012 and prime minister and foreign minister before that.

Thousands traveled to watch the inauguration in the capital Dili, with the 72-year-old sworn in just before midnight in a ceremony replete with fireworks and cannon fire.

The new president said he would represent all Timorese, and seek to rebuild national unity after a protracted political impasse in the parliament.

Ramos-Horta, who won a decisive victory in a second round of voting last month, said ties with Indonesia, Australia, and the region should be at the top of the national agenda, and that relations with China would be strengthened.

“It is our intention to expand bilateral cooperation with China,” he said.

He said he would push for greater food security and propose creating a coffee fund to protect farmers against global price fluctuations.

One of the most oil-and-gas dependent countries in the world, the half-island nation of 1.3 million people has grappled with diversifying its economy and reducing high rates of poverty.

While he ran in the presidential elections as an independent candidate, Ramos-Horta was backed by the National Congress for Timorese Reconstruction (CNRT) party, which is headed by former president and prime minister Xanana Gusmao.

Gusmao has strongly promoted the Tasi Mane project, which would see oil and gas from the Greater Sunrise field developed onshore, and with China touted as a potential developer.

Ramos-Horta also said he would continue to foster a special relationship with the United States, and advocate for East Timor to join the Association of Southeast Asian Nations (ASEAN).

The inauguration ceremony on Friday marked 20 years since the restoration East Timor’s independence.