Crucial transition period: What lies ahead for PH economy 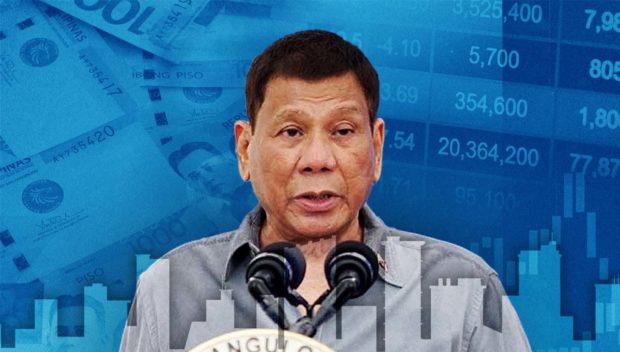 MANILA, Philippines—In over a month from now, President Rodrigo Duterte and his administration will pass the torch to the next administration. Among the things to be passed on is the country’s economy, which has suffered following the COVID-19 pandemic.

Presumptive president Ferdinand “Bongbong” Marcos Jr.—who remains the frontrunner in the 2022 presidential race with 31 million votes as of May 13 based on partial and unofficial results —is expected to take over and lead the country as Duterte’s term as president ends on June 30.

As the public awaits Marcos Jr.’s economic plans, experts have already shared their thoughts on the country’s economic situation—which they believe is in a solid shape—as the outgoing administration prepared to step down.

For Benjamin Diokno, governor of the Bangko Sentral ng Pilipinas (BSP), the next administration is set to inherit a “much better economy” from the outgoing administration. 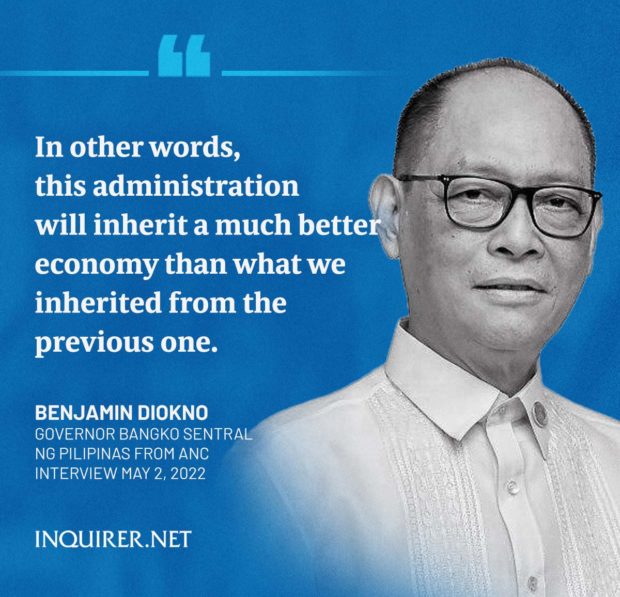 “To me, the next administration will be inheriting a sound tax system, which we reformed many times under this administration,” said Diokno in an interview over ANC last May 2.

“It will also be a recipient of many structural reforms like the amendments of the retail trade act, the foreign investment act, and public services act,” Diokno said.

“In other words, this administration will inherit a much better economy than what we inherited from the previous one,” he added.

When the late President Benigno Aquino III’s term ended, the country’s gross domestic product (GDP) for the first quarter of 2016 was 6.8 percent. 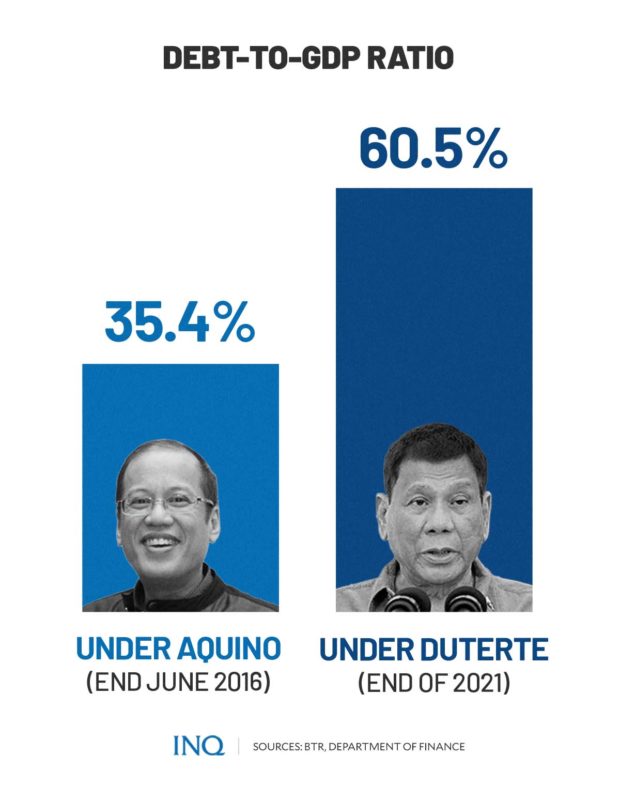 In the same period this year, under the Duterte administration, the GDP was at a higher 8.3 percent.

Diokno, however, noted that the next administration will also have to face and address an “increase in public debt as a result of the pandemic.”

In 2020, the Philippines suffered a 9.5 percent drop in gross domestic product (GDP)—the biggest since the government started recording yearly output in 1946 or after the Second World War.

In 2021, however, the Philippine economy’s full-year growth bounced back and reached 5.6 percent following the easing of COVID-19 quarantine rules.

“Before the pandemic the debt to GDP ratio of the Philippines was at the neighborhood of 39.6 percent. Now it rose to 60.5 (percent) because of the COVID-19 response and the accompanying drop in revenues,” said Diokno.

“But this level is pretty much manageable as long as we continue to grow at between 6 to 7 percent in the next few years,” he continued.

What the Duterte admin will leave behind

Contrary to Diokno’s statement, however, ING senior Philippine economist Nicholas Antonio Mapa stressed that the 2022 economy that Marcos Jr. is inheriting “is not the same” as the fast-growing economy that Duterte inherited from Aquino in 2016. 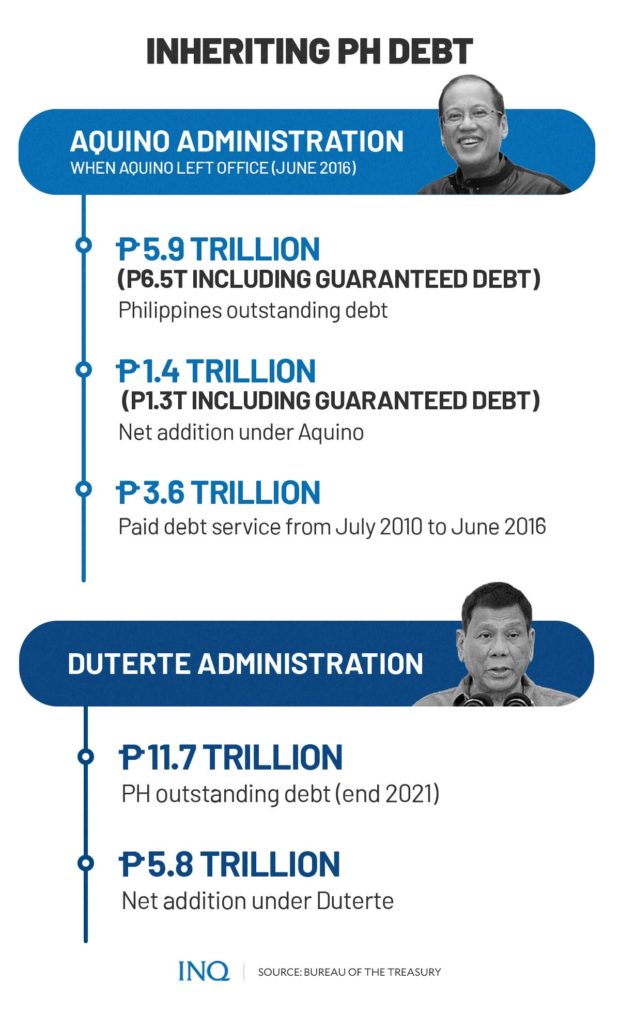 “There have been reforms in terms of legislation but the macroeconomic story is not as rosy as it was,” he added.

Data from the Bureau of the Treasury (BTr) showed that from the outstanding debt amounting to P4.6 trillion in June 2010—inherited by the Aquino administration from its predecessor—the national government’s total debt grew to P5.9 trillion by the end of Aquino’s six-year term.

This means that the net addition to the country’s debt under Aquino’s administration, from July 2010 up to June 2016, stood at P1.4 trillion.

On the other hand, under the Duterte administration that inherited the previous administration’s P5.9 trillion outstanding debt, the running total ballooned to P11.7 trillion by end of 2021. 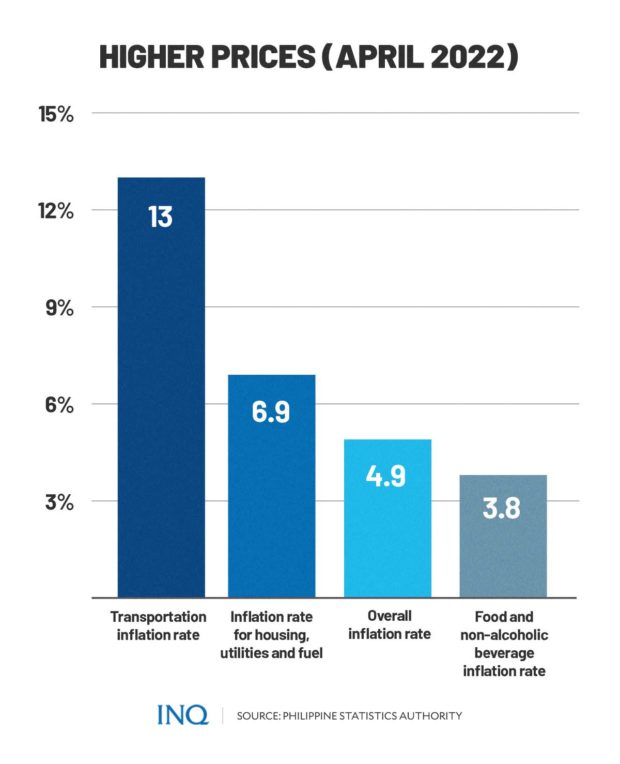 The government has increased its borrowings to finance its pandemic response. This includes the procurement of COVID vaccines, among others.

The national government’s outstanding obligations further climbed to a new high of P12.7 trillion in March, which was attributed to the P457.8 billion raised from five-year retail treasury bonds (RTBs) that month.

The country’s debt-to-GDP ratio meanwhile stood at 60.5 percent in 2021 and 60.9 percent in March, both of which were slightly higher than the 60 percent threshold considered manageable by multilateral lenders for developing countries. 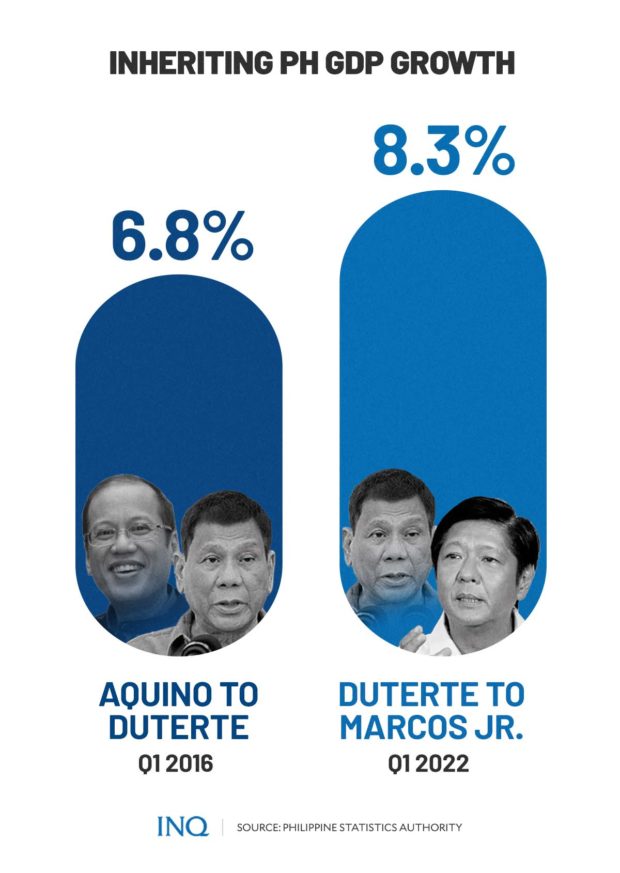 Still, the BTr said last year that “the current and projected debt levels of the Philippines are still sustainable, leaving some policy flexibility to absorb debt in case of further adverse shocks.”

The country’s ballooning debt, however, might not be inherited by the next administration alone. 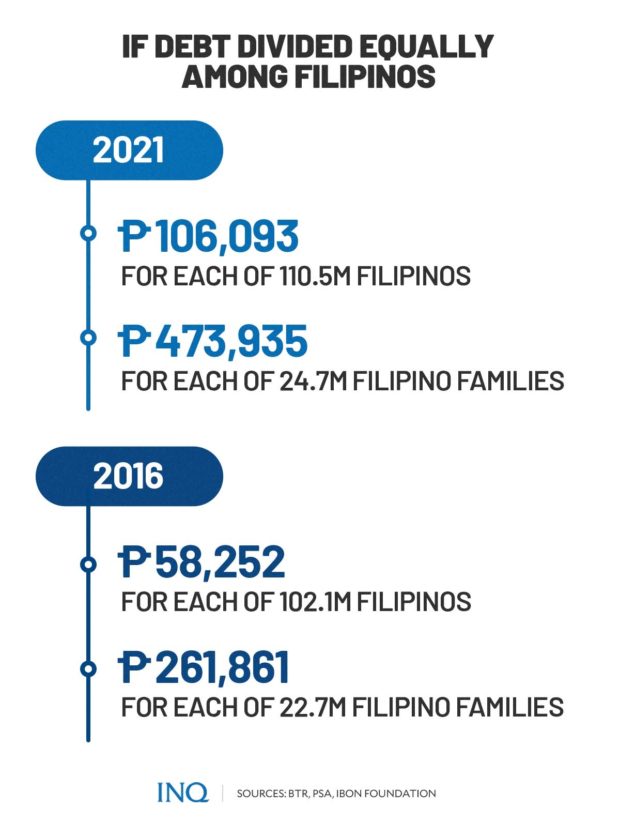 Also included in the “much better economy” to be inherited by the next administration will be the Philippine labor market, which, based on data, has started to show significant improvements after getting hit by the impact of the COVID-19 pandemic.

The National Economic and Development Authority (NEDA) on May 6 announced that the country has tallied a new record-low unemployment rate since the start of the pandemic. 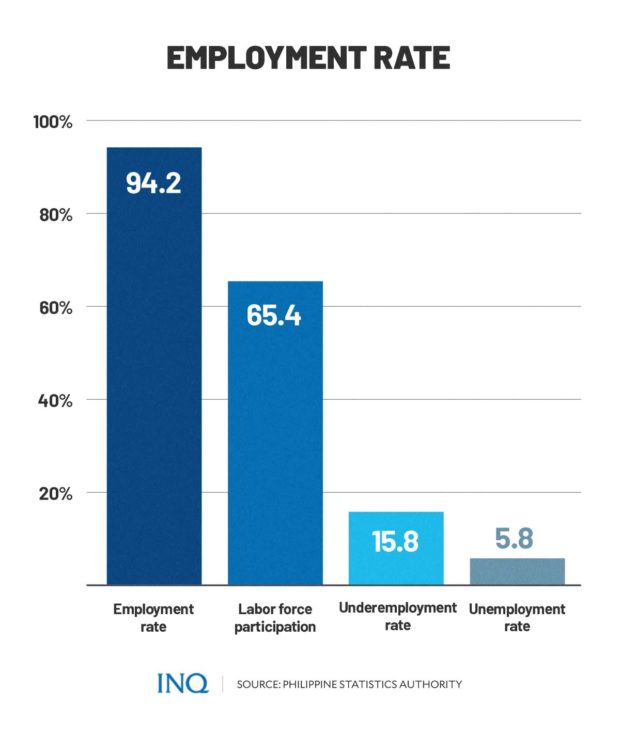 More Filipinos have joined the labor force amid the increased mobility and the government’s effort to reopen the economy.

“The country’s labor force participation rate continued its uptrend from 63.8 percent in February to 65.4 percent in March 2022, which is also the highest since the pandemic began,” NEDA said in a statement.

“The March labor force survey results reflect the gains from moving around 70 percent of the economy to alert level 1. As we continue to manage the risks, we reiterate our recommendation to shift the entire country to alert level 1 to generate more employment and strengthen the domestic economy against external shocks,” said Socioeconomic Planning Secretary Karl Kendrick T. Chua.

Advice for the next administration

With the challenges that will be inherited by the new president, Diokno suggested that the new administration should present a “fiscal consolidation program” to the people and to the international community—which would explain what they will do in the next three years to reduce the deficit and debt-to-GDP ratio which has increased because of the pandemic.

“The framework should include timely and efficient implementation of the tax laws and the recent amendments—the retail trade act, foreign investment act and public service—efficient allocation of budgetary sources by continuing the Build, Build Build program and investment at human resources, then improving the tax spending mix of the local government units—this is very important because LGUs now have more resources—and lastly, this is the elephant in the room, rationalizing the pension benefits of retired military personnel,” said Diokno.

Meanwhile, the Economic Development Cluster (EDC) chaired by Finance Secretary Carlos Dominguez III said it hopes that the next administration will be able to address the “headwinds facing the economy”—such as geopolitical uncertainties, inflation, and the lingering effects of the pandemic—as they replace the outgoing administration.

“The next administration must ensure that the debt accumulated is going to be a smaller part of our gross domestic product (GDP). To achieve that, the economy needs to grow at a rate higher than 6 percent as done by the Duterte administration,” the EDC said.

“This objective has become more attainable with the important reforms in place such as the amendments on the Retail Trade Liberalization Act, the Foreign Investment Act, and the Public Service Act, as well as the infrastructure program,” the EDC added, referring to “Build, Build, Build” aimed at ushering in a golden age of infrastructure after many years of neglect.