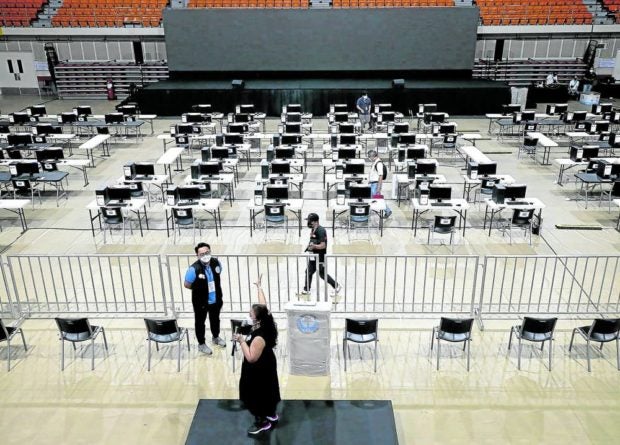 FILE PHOTO: The Parish Pastoral Council for Responsible Voting (PPCRV) has set up its monitoring and media center at the Quadricentennial Pavilion of the University of Santo Tomas (UST) in Manila, where it will conduct its quick count and parallel audit of the May 9 elections. INQUIRER/RICHARD A. REYES

MANILA, Philippines — Only nearly 80 percent of physical election returns (ERs) have been turned over to the Parish Pastoral Council for Responsible Voting (PPCRV) for validation as of Thursday morning, the poll watchdog said a day before it wraps up its operation.

Specifically, the PPCRV said it has so far received 85,859 ER copies, which is 79.66 percent of the total ERs it is expecting to acquire and verify. The PPCRV’s operation at the University of Santo Tomas’ Quadricentennial Pavilion is set to cease Friday, May 20.

A special election is yet to be conducted in some barangays (villages) of Lanao del Sur after the Commission on Elections (Comelec) declared a failure of the election in those areas.

With the help of hundreds of volunteer encoders, the PPCRV validates votes cast in the election through the ERs it has been receiving from the Comelec. The poll watchdog authenticates if the numbers on the ERs and electronic results coming out from the poll body’s transparency server check out.

The first run of validation by the PPCRV started Thursday, May 12. The group noted that as of May 14, the matching rate was at 98.39 percent while mismatch was at 1.61 percent.