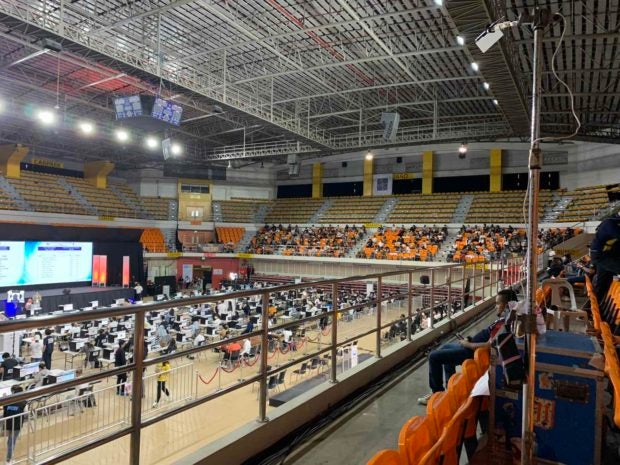 Inside the PPCRV headquarters at the University of Santo Tomas in Manila. (File photo from INQUIRER.net)

MANILA, Philippines — The overflow of food donations for the Parish Pastoral Council for Responsible Voting (PPCRV) has prompted the election watchdog to initiate a project outside its mandate: its own food drive.

“Because there was so much food [being sent to us], we actually donate[d] the excess to nearby institutions, hospitals and other beneficiaries,” PPCRV trustee William Yu told reporters on Monday.

At a press briefing on May 10, PPCRV chair Myla Villanueva called for food donations, as volunteers mostly from the youth continued to flock to its command center at the University of Santo Tomas in Manila (UST).

Not long after that appeal, the front lobby of UST’s quadricentennial pavilion had an influx of food packs from anonymous donors.

One of the volunteers quipped: “It seemed like I [went] to PPCRV for the buffet because of the food surplus.”

“We are overwhelmed and grateful for the kindness of all who have sent their food donations in response to our call yesterday. Our volunteers will be happily well-fed for the remainder of this week,” the PPCRV said in a post the next day.

Amid the sudden excess of food, the PPCRV asked donors to “channel their generosity in the form of cash donations, which we can better manage for the needs that arise.”

But one donor lent the PCCRV a vending machine that dispenses ready-to-eat meals for volunteers and staff.

Actress and philanthropist Angel Locsin also donated food packs, which prompted the poll watchdog to thank the “real-life Darna,” the Mars Ravelo superheroine that was among her past roles.

The PPCRV’s command center will remain in UST until Friday, but it has already scaled down its operations from 24 hours daily last week to 12 hours a day this week.

Volunteers also entertain themselves from time to time with games and sing-along sessions.

On Tuesday, some of them even performed a dance number of “I Can’t Stop Me” by Korean girl group Twice.

So, contrary to whatever impression may have been created from a recent controversy over the PPCRV’s responsibilities, the atmosphere in the command center was quite jolly.

Lingayen-Dagupan Archbishop Socrates Villegas, who dropped by last week to observe the PPCRV’s operations, said: “PPCRV volunteers, we can’t pay you, we can’t afford to pay you because only God can pay you…. The Lord knows the good hearts of these young people.”

“They’re so young, they’re so heroic, they’re so generous and I’m really touched and inspired,” he said.

Cardinal Jose Advincula, Manila archbishop, said in a post-election message: “Many of the volunteers are from the youth and we can really feel their desire to ensure the election’s integrity.”