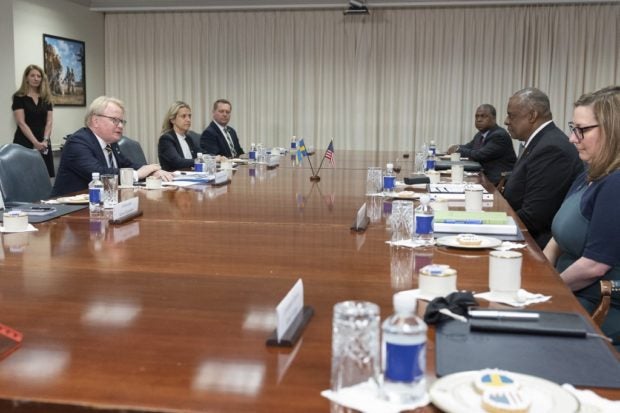 Swedish Defense Minister Peter Hultqvist (L) delivers remarks during a meeting with U.S. Secretary of Defense Lloyd Austin (2nd-R) at the Pentagon on May 18, 2022 in Arlington, Virginia. Secretary Austin is meeting with his Swedish counterpart after Sweden and Finland submitted their request to join the NATO alliance in the wake of Russia’s invasion of Ukraine. Kevin Dietsch/Getty Images/AFP (Photo by Kevin Dietsch / GETTY IMAGES NORTH AMERICA / Getty Images via AFP)

KYIV, Ukraine — US President Joe Biden will host the leaders of Finland and Sweden on Thursday to discuss their NATO membership bids, while Ukraine said no military option was left to rescue the soldiers still inside a steel plant besieged by Russian forces.

Moscow’s troops have been accused of widespread atrocities against civilians during their devastating campaign, and Ukraine began its first war crimes trial of the conflict on Wednesday with a Russian soldier pleading guilty.

The brutality of the invasion that began on February 24 shook Sweden and Finland, and the neighbors — after decades of military non-alignment — decided to seek NATO membership despite warnings from the Kremlin.

“I warmly welcome and strongly support the historic applications from Finland and Sweden for membership in NATO,” Biden said in a statement Wednesday, offering US support against any “aggression” while their bids are considered.

Biden will meet President Sauli Niinisto of Finland and Sweden’s Prime Minister Magdalena Andersson in Washington on Thursday for consultations.

But Western allies remain optimistic they can overcome Ankara’s objections.

In an effort to lower the diplomatic heat, US Secretary of State Antony Blinken met with Turkey’s Foreign Minister Mevlut Cavusoglu at the United Nations, who called the face-to-face discussion “extremely positive”.

Applications for entry into the alliance require the approval of all members.

For now, several including Britain have offered security guarantees to Finland and Sweden to guard against any Russian aggression.

British Prime Minister Boris Johnson said these applications would not have been expected recently “but Putin’s appalling ambitions have transformed the geopolitical contours of our continent”.

On the ground, in the ruined port city of Mariupol, more than 1,000 Ukrainian soldiers including senior commanders remained inside the besieged Azovstal steel plant, a pro-Russian separatist leader said.

Moscow said 959 of the troops had surrendered this week.

Ukraine’s defense ministry pledged to do “everything necessary” to rescue those still in the sprawling plant’s tunnels but admitted there was no military option available.

Those who have left the heavily shelled plant were taken into Russian captivity, including 80 who were seriously wounded, Russia’s defence ministry said.

The defense ministry in Kyiv said it was hoping for an “exchange procedure… to repatriate these Ukrainian heroes as quickly as possible”.

But their fate was unclear, with Kremlin spokesman Dmitry Peskov refusing to say whether they would be treated as criminals or prisoners of war.

Mariupol has been devastated by Russian attacks, and a US official alleged Moscow’s forces of committing atrocities in the city.

“Some Russian officials recognize that despite claiming to be ‘liberators’ of… Mariupol, Russian forces are carrying out grievous abuses… including beating and electrocuting city officials,” the official said.

Ukraine’s President Volodymyr Zelensky hit out at Moscow in his nightly address to the nation, calling the invasion an “absolute failure”.

“They are afraid to acknowledge that catastrophic mistakes were made at the highest military and state level,” Zelensky said.

Despite their last-ditch resistance in places such as Mariupol and the successful defense of Kyiv, Ukrainian forces are retreating across swathes of the eastern front.

The losses often come after weeks of battles over towns and small cities that get pulverized by the time the Russians surround them in a slow-moving wave.

“I tell everyone that there is no reason to worry when the banging is from outgoing fire,” Volodymyr Netymenko said as he packed up his sister’s belongings before evacuating her from the burning village of Sydorove in eastern Ukraine.

“But when it is incoming, it is time to run. And things have been flying at us pretty hard for the past two or three days.”

In the Russian region of Kursk, one person died and others were injured in an attack on a village on the border with Ukraine, the local governor said Thursday.

“Another enemy attack on Tyotkino, which took place at dawn unfortunately ended in tragedy,” Roman Starovoyt said on Telegram.

The conflict has sparked a massive exodus of more than six million Ukrainians, many bearing accounts of torture, sexual violence and indiscriminate destruction.

Ukraine’s first trial for war crimes — expected to be the first of many linked to the Russian invasion — began in a cramped Kyiv courtroom on Wednesday.

Vadim Shishimarin, a shaven-headed Russian sergeant from Irkutsk in Siberia, pleaded guilty to a war crime and faces a life sentence.

“By this first trial, we are sending a clear signal that every perpetrator, every person who ordered or assisted in the commission of crimes in Ukraine shall not avoid responsibility,” prosecutor general Iryna Venediktova said.

Russia’s government has no information on the soldier, Kremlin spokesman Peskov said, adding that many such cases reported by Ukraine are “simply fake or staged”.

The International Criminal Court is deploying its largest-ever field team to Ukraine, with 42 investigators, forensic experts and support staff to gather evidence of alleged war crimes.

In another step affirming US support for Ukraine, the American embassy in Kyiv reopened on Wednesday after three months.

The Kremlin meanwhile intensified a tit-for-tat round of diplomatic expulsions against European countries, ordering dozens of personnel from France, Italy and Spain to leave.

The Russian invasion has blown a hole in Ukraine’s finances, as tax revenue has dropped sharply, leaving it with a shortfall of around $5 billion a month.

Finance ministers from G7 nations will meet in Germany on Thursday to try and find a solution for Kyiv’s budget troubles.

The conflict’s economic impact has cascaded across the world, fueling a global food crisis that has pushed up prices, especially in developing nations.

Russia and Ukraine produce 30 percent of the global wheat supply.

UN Secretary-General Antonio Guterres said Wednesday that the conflict “threatens to tip tens of millions of people over the edge into food insecurity”.

“Malnutrition, mass hunger and famine” could follow “in a crisis that could last for years,” Guterres warned as he and others urged Russia to release Ukrainian grain exports.