Russians line up for last bite of Big Mac 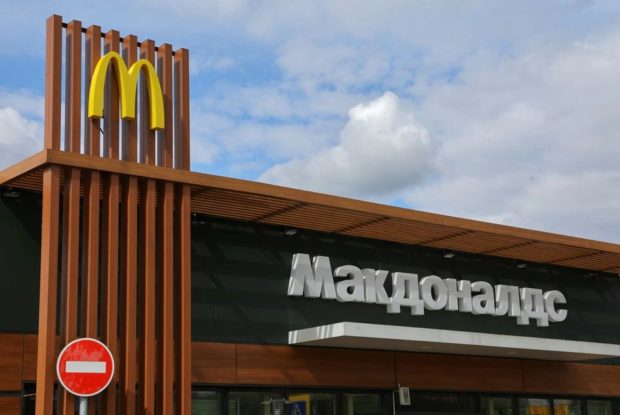 A view shows a closed McDonald’s restaurant in Moscow, Russia May 16, 2022. REUTERS

Russians lined up in a Moscow train station on Tuesday for what may be their last Big Mac from one of the few McDonald’s restaurants still open in the country.

The world’s largest burger chain is rolling down the shutters in Russia after more than 30 years, becoming one of the biggest global brands to leave following Moscow’s actions in Ukraine.

McDonald’s exit ends a chapter in the US company’s history that began when it started serving its burgers in Russia as a symbol of American capitalism.

The company had already decided to temporarily close its restaurants in the country in March. They included the iconic Pushkin Square location in central Moscow, which broke global records when opening on Jan. 31, 1990, as more than 30,000 people queued around the block for Big Macs costing 3 roubles.

“McDonald’s operates in few places now,” said 32-year-old Irina, who was queuing at the branch in Moscow’s Leningradsky Station, from where trains head north to St. Petersburg. “I miss McDonald’s, so when I go to St. Petersburg, I drop by and treat myself to a Big Mac.”

McDonald’s plans to sell 84 percent of its nearly 850 restaurants in Russia to a local buyer. The future of the remaining restaurants, operated by franchisees, is unclear.

The new owners will not be allowed to use Mcdonald’s name, logo, branding and menu. That left some Russians worried that the quality will suffer.

“I read yesterday that McDonald’s was closing soon and opening under a new name, so I rushed here today to buy my favorite cheeseburger, milkshake and chips,” said Alla, 21. “What if the quality gets worse after the rebranding?”

The franchised restaurants remain open and have seen a pickup in business since McDonald’s closed its outlets.

“In accessible locations in the center of Moscow and St. Petersburg we are seeing elevated demand,” franchisee Rosinter Restaurants (ROST.MM) said on Tuesday.

McDonald’s will retain its trademark in Russia, which analysts said left the door open for a return. In the meantime, restaurants will start reopening under new ownership and branding in June, a source close to the company said.

In southern Russia and Siberia, some franchised outlets are still trading.

One man from southern Russia drove for two and a half hours to find an open restaurant, he said in an online review posted on Yandex on April 21.

“I came to this McDonald’s especially from Samara, only 250 km,” the user wrote. “I remembered the atmosphere and happily dived into it.

McDonald’s to exit Russia after 30 years

Read Next
For the record: Duterte leaves legacy of impunity – CHR
EDITORS' PICK
DOH says COVID-19 cases plateauing, but public shouldn’t be ‘complacent’
Look Through: The fate of impounded stray dogs
23,000 cops to be deployed nationwide for school reopening
What to watch out for when selecting a video surveillance solution
House energy committee chair Arroyo bats for cheap electricity
Unleash the photographer in you this World Photography Day with vivo smartphones
MOST READ
Solons file resolutions seeking probe on ABS-CBN, TV5 merger
Korina Sanchez reunites with former ABS-CBN co-anchors Julius Babao, Cheryl Cosim
Light therapy could be the answer to your sleep problems
Sharon Cuneta asks for prayers for friend in ICU who suffered silent stroke
Don't miss out on the latest news and information.