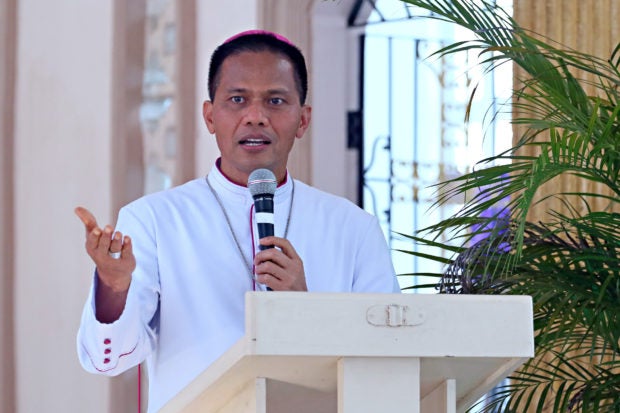 FILE PHOTO: Bishop Raul B. Dael of the Diocese of Tandag (Surigao del Sur) gives a homily during a Holy Mass for the Earth Day celebration on April 22, 2021. ERWIN M. MASCARIÑAS

SAN FRANCISCO, AGUSAN DEL SUR — Tandag City Bishop Raul Dael has condemned what he called the worst and one of the most massive vote-buying in the province of Surigao del Sur during the May 9 elections.

According to the bishop, the amount distributed to each voter reached almost P12,000 in Tandag City alone.

“Amidst our hardships, this could be the biggest amount of vote-buying in the country,” Dael said in his pastoral letter on Sunday morning (May 15), a copy of which was posted on the Roman Catholic Diocese of Tandag Facebook page.

Photos that circulated in private messages in Facebook chat groups showed different money denominations stapled separately for each name of a candidate in Tandag City, implying the price paid for each candidate. The denominations were contained in just one envelope distributed to target voters; so that each envelope contained as much as P11,690.

“Can we take pride in it?” Dael rhetorically asked parishioners in his pastoral letter. “We cannot deny that many were glad because of the huge amount of money they received in exchange for their sacred vote.”

He said that in the past few days, wherever one went, all stores and restaurants had been crowded with people.

The Catholic Bishop has earlier warned the faithful in a homily before May 9 polls not to vote for politicians who would buy their votes. Instead, they should vote to office those who are sincere in their intention to serve, by not enriching themselves while in power.

“Our abstinence from vote buying and vote selling (is) measured in this election because this is the only way to change our country,” Dael stressed in his homily.

Local observers said the huge amount of money offered to voters especially in Tandag City on the eve of the election was the result of the intense political rivalry between the camps of Rep. Prospero Pichay of the first congressional district here and reelectionist Governor Alexander Pimentel.

Pichay, who fielded his wife Cantilan Mayor Carla Pichay to run as governor, had reportedly irked Pimentel, who ran for reelection. The two rival camps had been engaged in mudslinging at the height of the campaign trail.