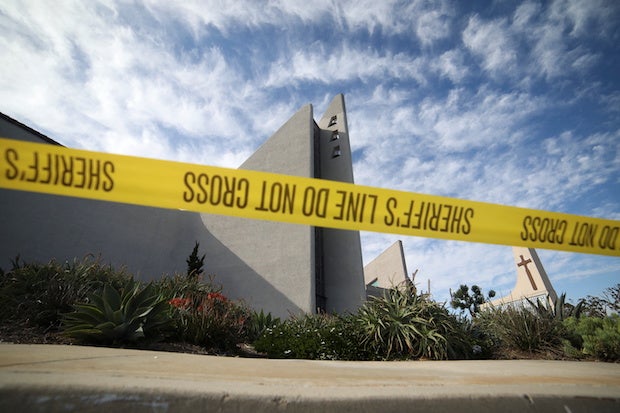 The Geneva Presbyterian Church is seen after a deadly shooting, in Laguna Woods, California, U.S. May 15, 2022. (REUTERS/David Swanson)

A California prosecutor on Tuesday said he would not rule out seeking the death penalty against a Chinese-American man who harbored anti-Taiwanese sentiment and opened fire at a church banquet, an attack that killed one and wounded five others.

The suspect, David Chou, 68, will face a single count of murder with a gun in connection with the Sunday attack, Orange County District Attorney Todd Spitzer told CNN. He also faces five counts of attempted murder and four counts of unlawful possession of an explosive.

Spitzer said the gunman brought an arsenal of weaponry, including explosives, incendiary devices, and two semi-automatic weapons, to Geneva Presbyterian Church in Laguna Woods, California, where he targeted people gathering for a Taiwanese-American church banquet.

The FBI said it was opening a hate-crimes investigation in the case. Spitzer said he may add a hate crime enhancement to the charges and will weigh whether he will seek the death penalty against Chou, adding that Governor Gavin Newsom has effectively put a moratorium on capital punishment. California’s last execution was in 2006.

“I’m going to have to weigh whether we will seek life without the possibility of parole or death. That’s a very, very solemn duty,” Spitzer said.

The gunman chained the doors so his victims could not get out of the church, Spitzer said, noting that he picked a vulnerable community that includes elderly individuals.

Up to 40 people, members of a Taiwanese Presbyterian congregation from nearby Irvine, California, were attending a luncheon honoring a former pastor when the shooting began, sheriff’s officials said.

Chou is a US citizen and Las Vegas resident born in China. He drove to Southern California on Saturday and came to the church on Sunday morning, authorities said.

Spitzer said the suspect was motivated by his anti-Taiwan beliefs. His family was from China, but he grew up in Taiwan. He was not treated well in Taiwan, where there was a lot of anti-China sentiment at the time.

“Apparently he has carried that resentment his entire childhood and adult life,” he said. “He took this church opportunity to come after those church congregants basically to come back and say I’m going to get even with the way I was treated.”

The sheriff’s department issued a statement late on Monday saying investigators had “determined that the suspect was upset about political tensions involving China and Taiwan” but did not elaborate.

Killed in the shooting was Dr. John Cheng. The 52-year-old was shot when he tackled the gunman, Orange County Sheriff Don Barnes said, crediting Cheng’s act of bravery with preventing more fatalities.

Subduing Chou gave other congregants, including a pastor, the opportunity to overpower him and tie his legs with an electrical cord, detaining him until sheriff’s deputies arrived.

Four men ranging in age from 66 to 92 and an 86-year-old woman were wounded, the sheriff’s department said.

Taiwan President Tsai Ing-wen was deeply concerned about the incident and has instructed the island’s foreign ministry to help the victims and their families, the ministry said on Tuesday.