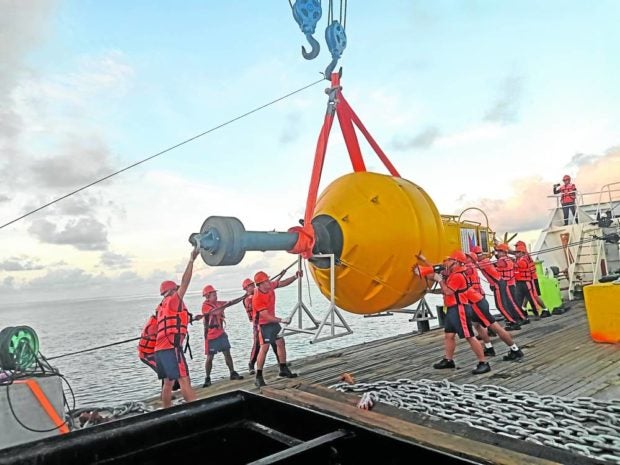 FULL FORCE | Philippine Coast Guard personnel maneuver a navigational buoy from their ship into the water — one of five they installed near their detachments at Spratly Islands in the West Philippine Sea from May 10 to May 17 to ensure safer navigation for ships and assert the country’s sovereignty in the disputed waters. (Photo from the Philippine Coast Guard)

The move is also deemed as symbolic of the country’s assertion of its sovereignty in the disputed waters.

“We deployed five ships—two from Manila and three from Palawan—to install the five buoys for navigational safety. It’s the first time that there [were] five PCG ships in the West Philippine Sea simultaneously,” Adm. Artemio Abu, commandant of the PCG, told the Inquirer on Tuesday.

The China Coast Guard, which has a dominating presence in the West Philippine Sea and the rest of the South China Sea, did not interfere with the PCG activity although there were Chinese ships in the vicinity.

“I gave the instruction that we should be first in challenging them. But there was no response from the Chinese,” Abu said.

A welcome ceremony to honor the Coast Guard personnel from the five vessels that participated in the recently concluded mission is scheduled on Wednesday at South Harbor. 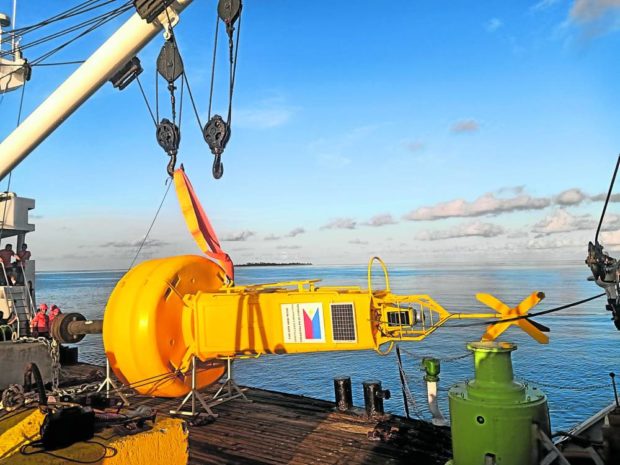 Abu himself visited Pag-asa Island on Saturday, accompanied by top Coast Guard officials. He personally checked on PCG personnel deployed to the island and distributed relief supplies to residents.

Pag-asa is the largest of the nine features occupied by the Philippines in the Kalayaan Island Group and the only one with civilian inhabitants.

China claims the entire South China Sea, including the West Philippine Sea. The Philippines, China, Brunei, Vietnam, Taiwan and Malaysia have overlapping claims in these waters.

An international arbitral tribunal ruled in 2016 to invalidate Beijing’s historical claims within its so-called nine-dash line although it refused to accept the ruling.